Some thoughts on inflation and what not to do about it

I have written extensively over the years on inflation and some of that is here in the blog (see this or this, or this more recently on Volcker the inflation dragon slayer, if you believe in fairy tales; there's way more if you search the blog; I also highly recommend this paper by Perry and Cline in ROKE, which is open, btw). My more recent piece on inflation came out recently in Catalyst, just before the war in Ukraine (on the war see this by Palley, and this old piece by Gary Leupp after the Crimean crisis in 2014), and the spike in oil, and foodstuff prices. But although this exacerbates things, the gist of my argument remains the same.

Inflation which had accelerated because of the supply constraints, and not because of the recovery or excess demand (sure the economy recovers fast in the US, but more than two million workers less are employed now than at the beginning of the pandemic; see figure below). It was all related to the pandemic and the problems in the supply chain, and logistic issues. Chips that affected the prices of cars, port and trucking issues, and even then energy prices that explained most of the increase (as I noted in my piece; see also the BLS report here).

This is all now exacerbated because of the war in Ukraine, which, together with Russia, produces a significantly large amount of oil, natural gas, and key food commodities like wheat. For example, both countries supply about 25 percent of global exports of wheat. 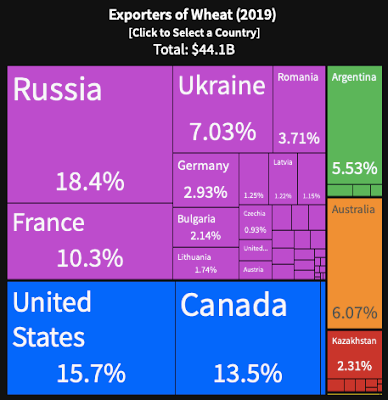 And wheat prices have certainly go up with the crisis (low point there before the spike is less than a month ago). Both energy and food are basic goods that entered in the production of everything, including themselves, and the implications of this are important. 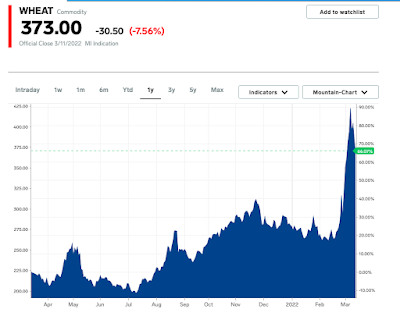 Ricardian rent theory suggested that the extensive use of of lands of lower quality would increase the rent, squeeze profits and (given that wages for him were at subsistence, and accumulation depended on profits) lower accumulation. In this case the higher rents that oil producers, for example, would obtain would impact prices, and given the inability of workers in most places (including the US) to demand higher wages (blame it on years of lack of organization, decreasing unionization and so on, which are hard to reverse even in the current context of heightened mobilization as I suggested in the Catalyst piece), real wages will fall. So this would make the supply side effects of the crisis worse. Inflation will remain higher.

But as I noted in the paper, wage resistance, the propagation mechanism that fueled the distributive conflict back in the 1970s is dormant now, and nobody should expect high inflation (let alone hyper, which is a completely different story). Also, in principle the hike in prices should not have, any direct effect on growth. But the effects of inflation acceleration on the mood for more fiscal expansion in Washington will impact growth. And higher interest rates that are coming will impact too (although I think less) spending, and also cool down the housing market, and that will have effects on consumption too. So the likely effect is higher inflation and lower growth. Btw, in the piece I suggest that this is the return of the 70s, all with a victory of the GOP in the elections and with Biden playing the role of Carter (That 70s Show reunion).

So what to do about all this. Conservatives and orthodox economists have demanded fiscal and monetary restraint. That, of course would only work if inflation was demand driven. I won't say anything else here on that. It would be a waste of time. On the left there have been some alternative policies. Some suggested price controls (and don't get me wrong, I do think they can be effective, and were under certain circumstances, old post here). But price controls would require a bureaucracy capable of controlling prices, and an economy much more organized, and particularly one in which key parts of the supply chain are at home, like the planned economy during World War II, in order to work. This is not the case right now.

Anti-monopoly and regulation policies, which have also been floated by some progressives, are also not particularly useful. I won't go into the whole issue of what in Latin America we called the oligopolistic view of inflation (as I note in my piece the first Gilded Age was a period of deflation, and the this current Gilded Age had been, so far, one of a Great Moderation), but even if you assumed that regulation could do something, the timing would be too long to have any significant short term effect.

Some MMTers have suggested that a Jobs Guarantee (JG) is the way to stop inflation, and while I'm for a JG for employment security reasons, I'm very skeptical about its relevance for price stability (my general views on MMT and inflation in this long post here). The main idea is to control wage increases, but again those will be in the medium term subdued, in my view, and the distributive conflict will not spark a price-wage spiral like in the 70s.

The US will use its oil reserves, and will use its power to try to manage production by OPEC countries, not just Saudi Arabia, but even Venezuela (a mission already went and visited Maduro, and not Guaidó, not surprisingly). And this efforts will probably to some degree contain what could be an even worse increase in global prices.

As it turns out I think that in the short run there is little that can be done. Inflation will remain higher. Not high inflation, but higher than the very low that we experienced for the last 30 or 40 years in advanced economies. The problem is not inflation, but the fact that real wages will fall, and that this will be used as an excuse for contractionary policies. Also, in some parts of the world this would lead to food shortages, and heightened social conflicts. This is inevitable to some extent, and the result of higher prices for basic goods, which do affect distribution as noted by Ricardo (in his case a squeeze of profits). The question that nobody asks is what is the problem with 8 percent annual inflation if real wages kept up with it. There's no evidence that it would affect growth, and in order to have some impact and disorganize relative prices seriously it would have to be much, much higher (classic paper on that by Bruno and Easterly here). Essentially the best thing that can be done is not much, but that is not in the cards.