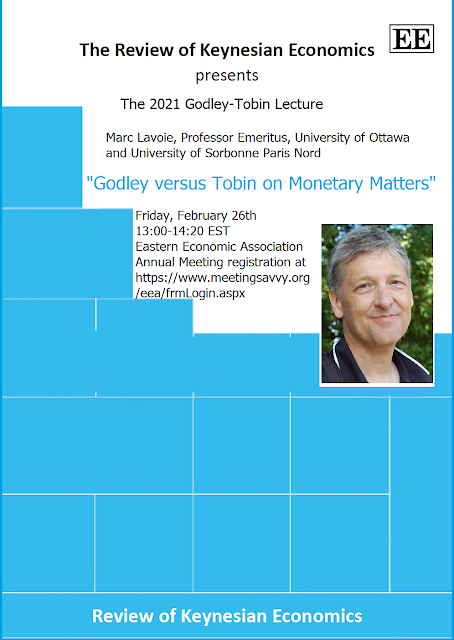 Part of the Eastern Economic Association Meeting, and sponsored by the Review of Keynesian Economics.
By Matias Vernengo - February 23, 2021 No comments:

Galbraith on the Texas Energy Debacle 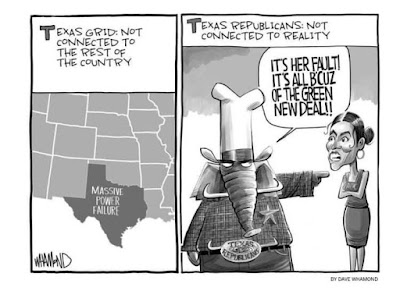 This piece shows very clearly the limits to deregulation in the case of energy markets. Jamie's oped was published in Project Syndicate, and a slightly different version is available here at INET, in which we find out that radical free market policies ended up in what he termed 'selective socialism.' The relevant paragraph:

the price mechanism failed completely. Wholesale prices rose a hundred-fold – but retail prices, under contract, did not, except for the unlucky customers of Griddy, who got socked with bills for thousands of dollars each day. ERCOT was therefore forced to cut power, which might have been tolerable, had it happened on a rolling basis across neighborhoods throughout the state. But this was impossible: you can’t cut power to hospitals, fire stations, and other critical facilities, or for that matter to high-rise downtown apartments reliant on elevators. So lights stayed on in some areas, and they stayed off – for days on end – in others. Selective socialism, one might call it.

There is a short video here too. 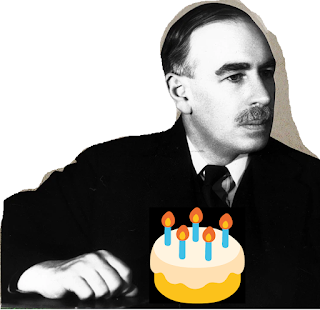 A day like today back in 2011. First post here. I was at the University of Utah back then, and blogging had been going for a while, but nothing that was close to the kind of heterodox economics that mattered to me. Also, the Review of Keynesian Economics (ROKE) did not exist yet. More than 2000 posts and 4 million visits later the blog has certainly passed its peak. Interestingly enough the post with more visits is about Venezuela, but the second is less of a surprise, the one on the capital debates. Then there are popular posts on Brexit, Capitalism and MMT. It is less an instrument for teaching to me know than it was at the beginning, and I have often thought of just stop blogging. Yet at different times when I debated what to do, I would get an email, or meet a student at a conference that would tell me that this blog had been the main, and sometimes the first source of heterodox ideas they encountered. Or friends that told me they used it in classes, or asked to post something. It became somewhat of a public good for at least part of the heterodox community. So the blog lingers. Thanks to all my co-bloggers, and the readers!

New Intro to Macro with a classical-Keynesian approach 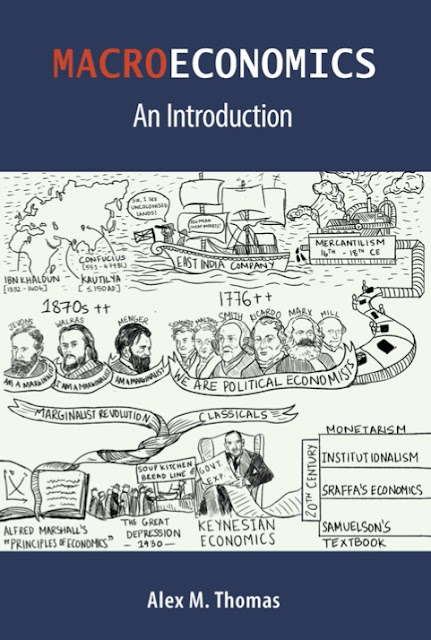 New textbook by Alex M. Thomas, from Azim Premji University, Bengaluru, India. From the back cover:

Macroeconomics: An Introduction provides a lucid and novel introduction to macroeconomic issues. It introduces the reader to an alternative approach of understanding macroeconomics, which is inspired by the works of Adam Smith, David Ricardo, Karl Marx, John Maynard Keynes, and Piero Sraffa. It also presents a critical account of mainstream marginalist macroeconomics. The book begins with a brief history of economic theories and then takes the reader through three different ways of conceptualizing the macroeconomy. Subsequently, the theories of money and interest rates, output and employment levels, and economic growth are discussed. It ends by providing a policy template for addressing the macroeconomic concerns of unemployment and inflation. The conceptual discussion in Macroeconomics is situated within the context of the Indian economy. Besides using publicly available data, the contextual description is instantiated using excerpts from works of fiction by Indian authors.

New Working Paper with Esteban Pérez at the networkideas. From the abstract:

The name and work of Raúl Prebisch are often associated with the problem of long-term economic development in Latin America. Less well known and explored is Prebisch’s contribution to the study of the monetary and financial problems of the countries of the periphery in relation to those of the center. Prebisch analyzed the post-WW-II monetary plans of John Maynard Keynes and Harry Dexter White from the perspective of their compatibility with his national autonomous monetary policy proposal. He thought that both plans had important shortcomings that would prevent the achievement of their intended objective, international equilibrium in the balance-of-payments. The plans ignored the differences in the levels of development between center and periphery. These differences implied that economic and monetary phenomena could not be viewed through the same lens and that all countries could not be subject to the same norms in monetary policy. Prebisch’s concerns were shared by John H. Williams and also, by Michal Kalecki.

The New IMF and the Covid Crisis

Video of the roundtable sponsored by the Review of Keynesian Economics on the changes (or lack of) at the IMF with Ilene Grabel, Marc Lavoie, Esteban Pérez Caldentey and Florencia Sember.
By Matias Vernengo - February 05, 2021 No comments:

This paper presents a macroeconomics-friendly Post Keynesian model of the firm describing both an inventory theoretic approach and an entry deterrence approach to choice of excess capacity. The model explains why firms may rationally choose to have excess capacity. It also shows the two approaches are complementary and reinforcing of each other. Analytically, the paper makes three principal contributions. First, it provides a simple framework for understanding the microeconomics of capacity utilization choice. Second, it reframes the Post Keynesian discussion of capacity utilization by making excess capacity choice the key to understanding normal capacity utilization. Third, it implicitly challenges Neo-Kaleckian wage-led growth theory as the model shows choice of the optimal excess capacity rate is independent of the level of demand.
Read rest here.
By Matias Vernengo - February 01, 2021 1 comment: