The US and Russia: beware of Neocons and liberals preaching democracy promotion

Every week my e-mail box receives a steady stream of articles aimed at cultivating public animus to Russia. The articles are always wrapped in a narrative in which Russia is a threat to democracy in Ukraine, Eastern Europe, and elsewhere. The effect is to create public support for hardline action (economic and/or military) against Russia.

The insidious underside of this campaign is it paves the way for a scenario in which Ukraine provokes Russia, thereby drawing a Russian response that is then used as a pretext for US engagement. In such circumstances, the public would have been primed for action and would almost certainly fail to disentangle the truth.

What is terrifying is the scope of the stream, which spans the spectrum from far-right to center-left.
Read rest here.
By Matias Vernengo - December 09, 2021 No comments:

By David Fields (guest Blogger)
One of the defining features of classical political economy, particularly Marx, is the schema of a class system based on those who control the means of production, capitalists, and those who do not, wage labor. Yet, the intricacies of capitalist reality are more complex. As such, is it possible to formulate a model that better captures integrated social processes? Below is my attempt to do just that. 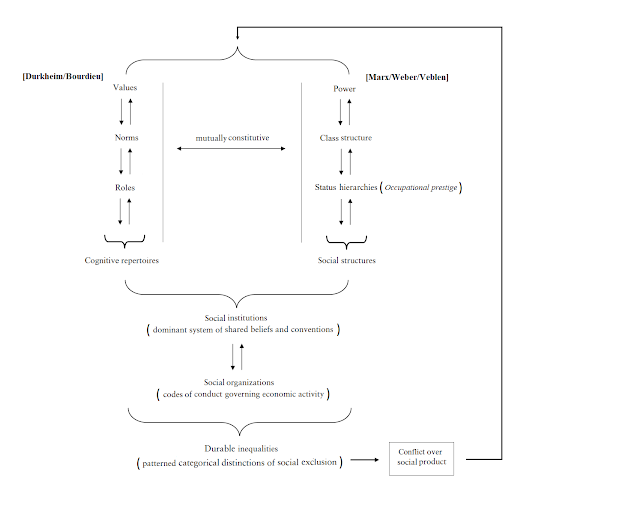 This model, in my view, allows for greater attention to be devoted to analyzing the extent to which particular forms of social status and social class, allowing for intersectionality, are reproduced by general cultural conditions that affect the social division of labor, which, in turn, shape said conditions, ensuing different forms of social stratification. It provides for more detailed social comparisons of socially inferred, though, not mutually exclusive, categories of social standing that illuminate the degree to which social gradients of social mobility and social positioning, which have wide ranging implications regarding life chances, translate into nested sets of social inclusion and exclusion, producing unequaly distributions of social functions (i.e., power differentials) that foster social segmentation, which capitalism requires to sustain itself. Hence, it is a dynamically recursive abstraction to acutely examine the underlying relations that generate social hierarchies with respect to economic outcomes. It allows for more elaboration of what actually facilitates the social inequalities, taking into consideration intersubjective social processes of social judgment that generate social positions of rank, which, altogether, by definition, foster uneven role sets and role expectations in capitalist society.