Demand Drives Growth all the Way

New paper by Lance Taylor, Duncan Foley and Armon Rezai. From the abstract:


"A demand-driven alternative to the conventional Solow-Swan growth model is analyzed. Its medium run is built around Marx-Goodwin cycles of demand and distribution. Long-run income and wealth distributions follow rules of accumulation stated by Pasinetti in combination with a technical progress function for labor productivity growth incorporating a Kaldor effect and induced innovation. An explicit steady state solution is presented along with analysis of dynamics. When wage income of capitalist households is introduced, the Samuelson-Modigliani steady state “dual” to Pasinetti’s cannot be stable. Numerical simulation loosely based on US data suggests that the long-run growth rate is around two percent per year and that the capitalist share of wealth may rise from about forty to seventy percent due to positive medium-term feedback of higher wealth inequality into its own growth."

Godley-Tobin Lecture at the EEA in Boston 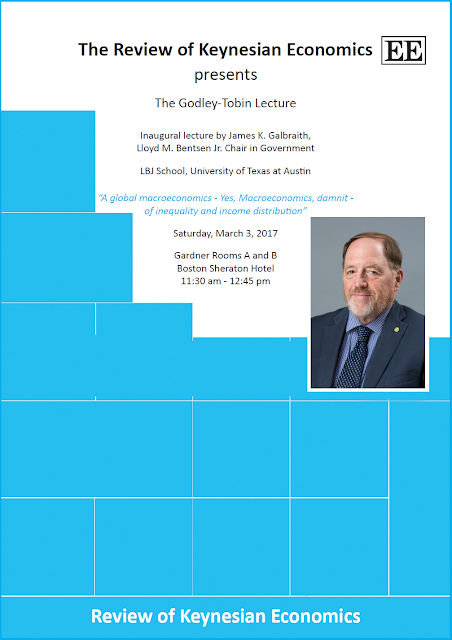 James k. Galbraith on inequality at the EEA in Boston. Don't miss it!
By Matias Vernengo - January 22, 2018 No comments: 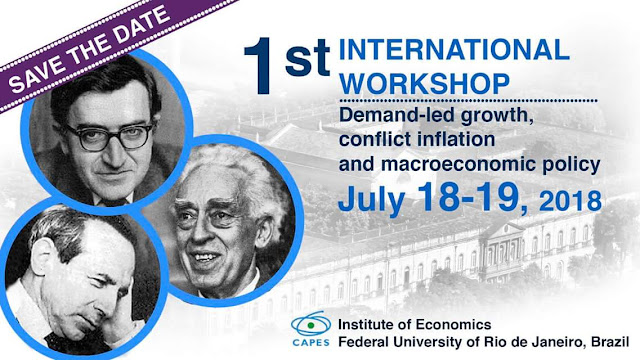 At my alma mater the Federal University of Rio de Janeiro (UFRJ), to be co-sponsored by the Review of Keynesian Economics (ROKE). Call for papers to come soon in this channel. Stay tuned.
By Matias Vernengo - January 22, 2018 No comments:

The slow recovery in historical perspective: 10 years after the Great Recession

It's hard to believe, but it has been almost a decade since the Great Recession. The official recession started in December 2017, but everybody remembers the collapse of Lehman in September of 2008. When you look at the recovery from the last recession in historical perspective, two things are clear. If you take GDP fall, or increase in unemployment, the Great Recession does not compare to the Great Depression, and that means that fiscal policy (automatic stabilizers and stimulus package) did work. The other is that 10 years into it, we are more or less were we where after 10 years of the Depression (which means the New Deal worked too, since the decline in GDP back then was much more pronounced, and recovery started in 1933). 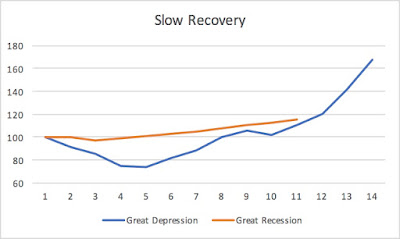 But what I think is crucial, if one extends the historical data, is the effect of that crucial Keynesian experiment, World War II. Keynes was correct when he wrote in 1940 that: "It is, it seems, politically impossible for a capitalist democracy to organize expenditure on the scale necessary to make the grand experiments which would prove my case -- except in war conditions." And indeed, it seems very hard to see any circumstances that would push spending up to the extent needed to avoid the slow recovery to continue its course, and for 'secular stagnation' to prevail.

Actually if one looks at GDP per capita (per worker in fact), as The Economist (from last December, which was the inspiration for the graph above) does, then it seems that the New Deal/World-War-II policy experiment already looks better than the last decade. 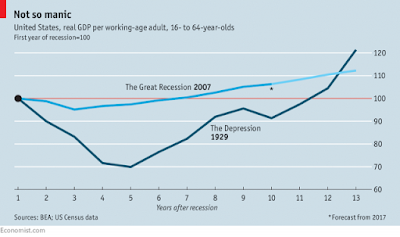 And that is not considering that there seems to be a bubble in asset markets and the Fed is hiking rates (although I doubt that much). So things do not look particularly good.
By Matias Vernengo - January 14, 2018 No comments:

I have not written on the problems in the region for a while now (last stuff that is more comprehensive here in the talk at Keene, for example), in part, because the whole theme is a bit depressing (more recently the Honduras crisis, and the return of the right in Chile). As I have noted before, there is no doubt that the collapse of commodity prices has played a significant role in the downturn in the region, but it is also true that a lot of the problems are political in nature, and the resurgence of neoliberalism (with the support of the US, btw) has played a significant role too. In my view, the latter is far more relevant.

Two recent issues that I wanted to note, and that prompted my return to the issue of the crisis in the region. One is the downgrading of the Brazilian public debt by Standard & Poor's (I've written on credit rating agencies before here, and on the  previous downgrading of Brazil too). As I noted before, the Brazilian economy didn't face any significant fiscal or external problem. Figure below, from IMF WEO data, shows that the primary balances were actually positive until Dilma decided to cave and do a fiscal adjustment in 2015 (which did not save her from the coup, btw). And the external (current account) deficit was small, and manageable given the humongous external reserves and the great amount of global liquidity. 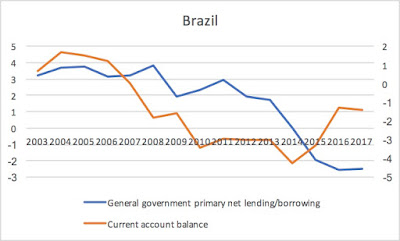 At any rate, why the new downgrading, you ask. The reason is to force the Brazilian government to push once again for pension reform. The whole point is that the crisis was caused to create the conditions for the dismantling of the old remnants of the very incomplete welfare state, if one can speak of one in Brazil, that survived the neoliberal onslaught of the 1990s under Fernando Henrique Cardoso. One should not minimize the importance of the soft power of US institutions, including the credit rating agencies, and how they can be used to promote certain political agendas.

The other issue is related to Venezuela (see my two previous posts here and here). I noted before that Venezuela's democracy (very problematic one, as I noted, before you complain; read the posts in the links please) is under attack, and that right wingers should not be seen as pushing for democracy against an authoritarian regime. That rhetoric, that still permeates most of the coverage in the US, is simply incorrect. I was somewhat shocked to read the recent op-ed by Ricardo Hausmann asking for military intervention by foreign powers (meaning the US). By the way, this comes from someone with the authority of being a Harvard professor (not that Harvard is supporting the coup, as far as I know). The role of the soft power of US institutions again.

If there were any doubts about their (right wingers that supported the 2002 coup) commitment to democracy I think this clears it up. I'll leave a discussion about the accuracy of the claim that elections have been rigged and the extent of the 'famine' for another post (something old on the latter here). I just wanted to note that here there is that step that is always there in the authoritarian argument about the justification for violence and the removal of the democratic institutions. Unacceptable.
By Matias Vernengo - January 12, 2018 1 comment: 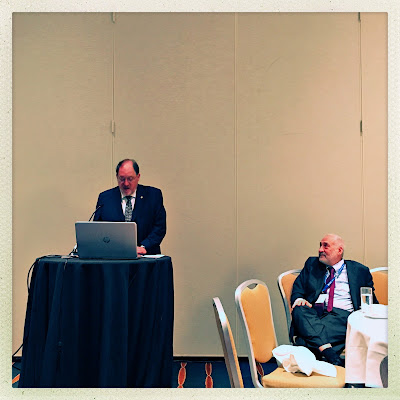