The editors of ROKE are pleased to announce that Professor Paul Krugman has agreed to give the 2022 Godley–Tobin Memorial Lecture. Professor Krugman is Distinguished Professor of Economics at the Graduate Center of the City University of New York. He has also taught at MIT, Princeton University, and Yale University. Like James Tobin, Professor Krugman was awarded the Nobel Memorial Prize in Economics (2008) and the American Economics Association’s John Bates Clark Medal (1991).

Professor Krugman’s work has focused on international economics and macroeconomics. He is a prominent American public intellectual who is widely recognized for his regular column in The New York Times. The title of Professor Krugman’s lecture is “The enduring relevance of Tobinomics”.
The lecture will be held at Bucknell University, Lewisburg, PA on April 20, 2022, at 5.00pm and it will also be live streamed.
By Matias Vernengo - January 20, 2022 No comments:

A new piece by Jamie Galbraith on Project Syndicate, that reviews some recent books, but deals essentially with what happened to heterodox economics, a theme that has been treated here often (on the definition of heterodox economics go here). Jamie provides an apt definition, on the basis of what he got at Cambridge back in the 1970s. In his words:

When I attended the University of Cambridge in 1974-75, I read Keynes, met Piero Sraffa, listened to Joan Robinson, and studied with Kaldor, Luigi Pasinetti, Richard Goodwin, Ajit Singh, Wynne Godley, Robin Marris, and Adrian Wood. Back then, it was understood at Cambridge that markets do nothing like what Coyle claims they do. Just as Einstein had erased Euclid’s axiom of parallels, Keynes’s General Theory had long since obliterated the supply curves for labor and saving, thereby eliminating the supposed markets for labor and capital.

It followed that the prices of production were set by costs(mostly labor costs and interest rates), while quantities were determined by effective demand. Markets were not treated as if they were magical. It was obvious that most resources and components did not move under the influence of an invisible hand.

On the origins of Sraffa's equations

Giancarlo de Vivo suggests that the Sraffian equations come from Marx's schemes of reproduction, and that the inspiration was in a footnote from the editor, Karl Kautsky, in the Theories of Suplus Value. Here a letter from Maurice Dobb and Piero Sraffa to Kautsky, from 1929, asking to use his edition as the basis for an English translation (originals in Kautsky's archives): 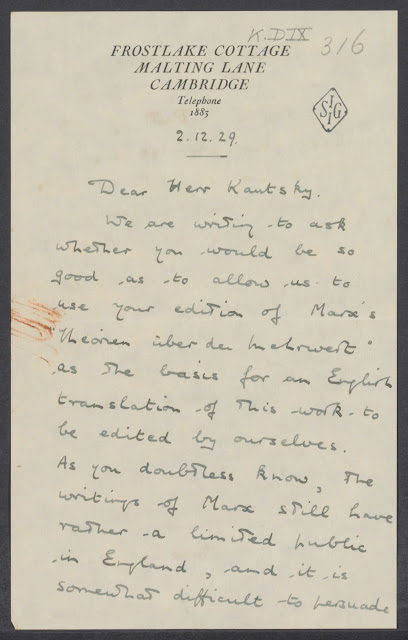 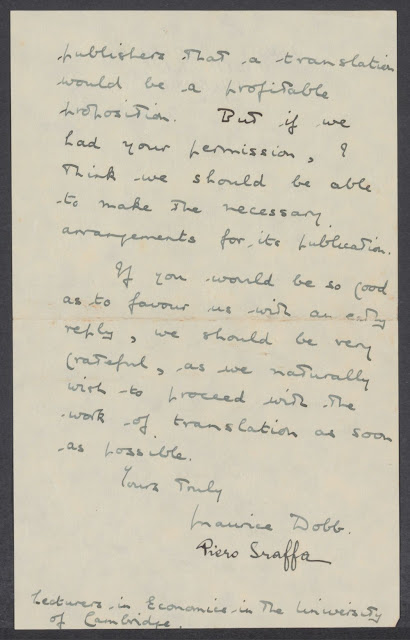 De Vivo's views are discussed in a book edited by Massimo Pivetti, which is certainly worth reading (I have the Spanish edition). I never thought of this genealogy of the Sraffian price equations as being controversial, but I have been re-reading some discussion about Sraffa's contributions between Pierangelo Garegnani and Marxist authors (from the 1970s) as a result of the events related to the latter's ten year death anniversary, and it did strike to me that it is unclear to most Marxists how closely related the prices of in the Production of Commodities are with Marx's work.
By Matias Vernengo - January 15, 2022 No comments:

The IMF’s 2018 Stand-By Arrangement with Argentina: An Ultra Vires Act?

A good paper by Karina Patricio and Chris Marsh that deserves a wider readership, in particular if you are interested on the International Monetary Fund (IMF) and it's policies. The paper argues that the IMF agreement is legally void, and might lend support (the authors do not say so) to a more radical view, suggesting that Argentina should not pay. From the abstract:

The 36-month exceptional access Stand-By Arrangement (SBA) with the Republic of Argentina approved by the International Monetary Fund (IMF) in June 2018, later augmented in October 2018, represents the largest programme in the history of the Fund. The programme, however, has failed in all its core objectives. While the programme has been subject to macroeconomic critiques, this is the first study that integrates such analyses into a comprehensive legal evaluation, with resort to general Public International Law, the law of the IMF and, where international law is uncertain, relevant analogies with English private law.We introduce the hypothesis that the SBA violated the core purposes of the IMF as per its Articles of Agreement and, therefore, constitutes an ultra vires act. To explain why, we proceed as follows. Section 1 provides the legal foundations of our analysis. First, it explains the ultra vires doctrine in international law and outlines key considerations drawn from case law of the International Court of Justice for the recognition of ultra vires acts. Second, it draws on core provisions of the Articles of Agreement to discuss relevant purposes of the IMF, as well as a set of authorisations and limitations to its powers established in the treaty to achieve such purposes. Section 2 draws on macroeconomics to discuss how those substantive rules were violated in the SBA in a way that is too manifest to be open to reasonable doubt, thereby raising suspicion that the SBA’s approval was ultra vires. In particular, the programme was characterized by egregious assumptions and accounting inconsistencies that meant the objectives were impossible to attain. Section 3 considers the impact of the IMF’s recently published Ex-Post Evaluation of Exceptional Access Under the SBA on our legal analysis. Section 4 draws on the premise that the SBA’s approval constituted an ultra vires act to discuss the potential legal implications of its invalidity. Section 5 concludes this piece by summarising its key findings and reflecting upon the need for clarification on the legal validity of the SBA, as well as further scholarly research on ultra vires lending by the IMF.

Read full paper here. This is in accordance with recent critiques on the IMF role by Joe Stiglitz and Kevin Gallagher. Note that the IMF itself has done a mea culpa of sorts on the lending to Argentina (see here).