Following my talk on the same topic, on the same venue, now someone that might know a bit more about what's going on, particularly in Brazil. Professor Mazat will talk this Friday, and I highly recommend it. To register go here. Btw, Numa is Professor of Development Economics in the Institute of Economics at Federal University of Rio de Janeiro, my alma matter.
By Matias Vernengo - May 27, 2020 No comments:

An Argentinean default is neither new, nor a surprise, perhaps, even for a casual observer of the ups and downs of international bond markets. One may want to follow Oscar Wilde’s Victorian governess advice and omit the chapter on the fall of the peso as being ‘too sensational.’ But an Argentinean default now, after the Great Shutdown provoked by the coronavirus pandemic, would be the harbinger of a generalized sovereign debt crisis for emerging markets that would engulf the global economy, and make the recovery slower and more painful, including in the United States and other advanced economies. It may also undermine the US position in the global economy. 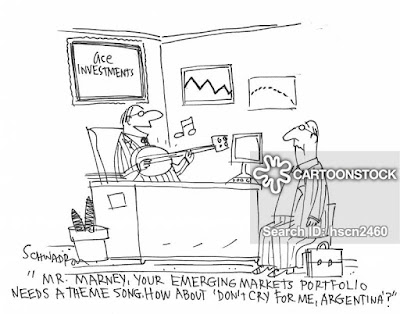 The Argentinean government’s debt restructuring proposal to the private creditors expired Friday, May 8th, with a limited number of adherents. In particular, large institutional investors did not accept the terms offered by Martín Guzmán, the finance minister, which would have implied a cut of about sixty percent of the principal, and a moratorium on payments for three years. This proposal, one might add, was for the most part designed before the coronavirus crisis, and the collapse of the global economy. The main preoccupation of the proposal was to put the external debt of the country on a sustainable basis, meaning in line with its ability to pay, which depends on its exports, the only secure source of dollars.

Black Rock, Fidelity, PIMCO and other investment funds that hold enough of Argentinean debt to preclude any rescheduling, want a cut of around forty percent, and have enough influence to hold out for a better deal (this guy here says Black Rock is the fourth branch of government). Since Argentina did not make a payment of interest of approximately US$ 500 million in April 22nd, today the country could be officially in default (grace period expires today, even if government extended negotiations). In the absence of a negotiated solution with the main bondholders the default is inevitable. The impasse is established, and the question is how can the stalemate be broken. Only the U.S. government holds the key for a negotiated solution.

The International Monetary Fund (IMF), the United States government, and other international creditor groups like the Club of Paris have been unusually supportive of Argentina. The IMF that had lent US$44 billion to Argentina between 2018 and 2019, has openly argued that the Argentinean debt is unsustainable, providing support for the rescheduling proposal. The U.S. government that has been a harsh critic of center left governments in the region, has had good rapport with the new government of Alberto Fernández, and his vice-president, the ex-president Cristina Fernández de Kirchner, with whom relations were considerably less friendly in the past.

As Jagdish Bhagwati famously implied with the notion of a Treasury-IMF-Wall-Street complex, the connections between the financial sector, the United States government and the multilateral organizations run deep. The current Treasury Secretary, Steve Mnuchin, as it is well-known, worked at Goldman Sachs, and he is the last of a long list of Wall Street connected government officials. Only the United States would have the clout to influence bondholders to come to the table with a reasonable counter offer. This would be of interest not only to Argentina, and its creditors, since a default would lead to years of litigious disputes that would only be sorted out by the courts, but for the United States and its global standing in the midst of the pandemic.

The collapse of international trade and of the price of commodities, the disappearance of remittances and revenues from tourism, coupled with the normal flight to safety will put other developing economies, that were not on the verge of collapse like Argentina, on unsustainable paths too. Most of these debts are denominated in dollars. The exorbitant privilege associated to the international position of the dollar comes with some requirements, as Charles Kindleberger famously noted. It requires acting as a global lender of last resort, providing counter-cyclical demand in times of distress. The U.S. is already doing some of these, with the Fed offering swap lines for central banks of a few countries, but it has blocked other initiatives like the expansion of the IMF’s Special Drawing Rights. Certainly not enough, and debatable whether it is enough even for domestic purposes (let alone other problems noted here, like the notion that the federal government would allow subnational units to go bankrupt)

Even more important in the context of the pandemic, particularly for the U.S. global standing, would be to allow countries that are indebted in dollars to default. These countries need the international reserve currency for the importation of essential medical equipment and pharmaceutical goods. The crisis has, if anything strengthened the position of the dollar in the short run, but there are dangers.

A financial crisis in the middle of a pandemic could have enormous human consequences, and it could also create the conditions for an eventual reduced role for the dollar. The pandemic has exacerbated the dispute between the United States and China, and the latter has already expanded its global lending in renminbi for years. It is also trying to provide medical support for affected countries in the region, to reduce criticism about its role in the pandemic, and now has stepped in to provide medical support. Argentina too has received medical equipment from China. If the U.S. is perceived as unresponsive, it is not inconceivable that China, if it follows a more generous credit policy, could be favored by the crisis.

The best possible outcome would be a negotiated solution, which would probably fall somewhere in between the Argentinean government offer and what would make the big institutional investors not loose money in the short term. Somewhere between a forty and a sixty percent haircut. That would allow the Argentinean government to deal with what really matters, the pandemic, and perhaps expand its spending without fear of external consequences. The U.S. Treasury and the IMF should back more vocally such a solution. Time is running out.
By Matias Vernengo - May 22, 2020 No comments:

On the Argentinean debt renegotiation (in Spanish)

My interview on Led.fm with María Iglesia and Cecília Camarano for the program Reperfiladas (in Spanish, obviously) on the Argentinean debt restructuring.
By Matias Vernengo - May 06, 2020 No comments:

Argentina's creditors are being asked to accept a proposal that would reduce their revenue stream but make it sustainable. A responsible resolution will set a positive precedent, not only for Argentina, but for the international financial system as a whole.

The Economic Consequences of COVID-19 in Latin America 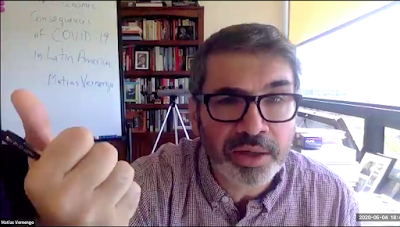