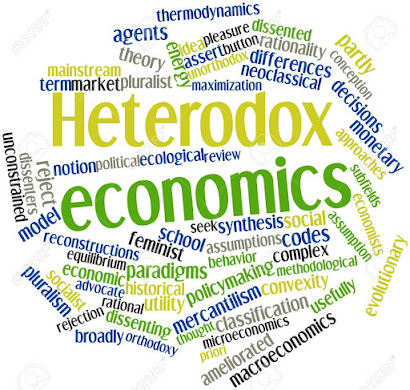 Heterodox economics refers to any school of thought which is not accepted by the economic mainstream, or neoclassical economics. Post-Keynesian economics is a heterodox school of thought which believes (amongst other things) in high levels of government intervention, fundamental uncertainty, and that the economy is demand-driven rather than supply-constrained (as neoclassical economics says). Keynes himself was concerned with creating theories which were realistic and was even willing to reject theories he had previously supported if empirical evidence disproved them.

Some Post-Keynesian ideas have been adopted into the mainstream; following the 2008 financial crisis, the mainstream had little to no explanation for what had caused the housing market crash and so they adopted the post-Keynesian idea of speculative bubbles, a phrase which is now frequent in mainstream literature. Post-Keynesian ideas are also relevant in the current pandemic, with the UK government pursuing expansionary fiscal policy such as furlough payments to stimulate the economy, something which Keynes believed in strongly.

Fortunately, I have a module on schools of thought in economics at my university (the University of Leeds), which explores heterodox ideas including post-Keynesianism, feminist economics, Austrian economics and Marxism, as well as discussing why pluralism is important in economics. However, I had already been studying economics for 2 years at school before I got to university, and we had never been taught that the graphs and theories we were learning came from mainstream economics. We were never shown the issues of neoclassical economics such as its failure to apply to the real world and the vast oversimplifications of its models. Furthermore, even at university, we have just one module on heterodox economics and the rest of the modules have a clear undertone of neoclassical theory.

Personally, I was driven to search for heterodox alternatives because I began to realise how unrealistic mainstream economics is and that means that neoclassical economics has led to many (if not all) of the issues in our society such as inequality and environmental damage. Heterodox schools such as post-Keynesianism are concerned with creating more realistic models and I believe this is where we have a greater need for pluralism in economics.
By Matias Vernengo - August 25, 2020 No comments: 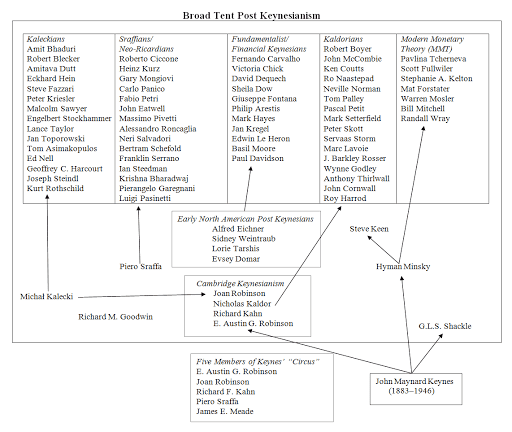 Nicole L. Kormann da Silva (Guest Blogger)
I am from Brazil and I did my bachelor’s degree at Universidade Federal de Santa Catarina. I would say the course there can be relatively multidisciplinary and open to alternative approaches, but macroeconomics was mainly restricted to conventional textbooks and it was only during other classes like Political Economics and Economic Development of Brazil that some insights came across my mind: it was possible – and in fact there was already a structured body of work on it – to perceive economics from another starting point.

For me heterodox economics is a pluralist umbrella under which, among other schools, you find Post-Keynesian economics – PKE. I would say heterodox economics give us the possibility to rethink economics in a more realist term and grasp the intricacies that shape our society and the relations necessary for the reproduction of people and the system. PKE has its origins on the work of Keynes and Kalecki and understands that  e follow a historical trajectory permeated by things that cannot be calculated, and are affected by fundamental uncertainty.

The main contributions of PKE in my opinion lay on its very fundamental aspects. They break with the economicism of the mainstream, that reduces economics to a technical matter, making clear that the macroeconomics is not the sum of decisions made by rational agents. PKE permit us to comprehend that there are different roles to private and public agents and we cannot treat them as equals, in particular when it comes to their ability to expand demand and eliminate unemployment. Besides, economics is permeated by class struggle and distributive conflict. This leads us also to a political dimension, like Kalecki make clear: full-employment might be constraint not for lack of theoretical knowledge, but by political interest. Lastly, preferences for liquidity enter the system and the principle of effective demand tells us that just by a great coincidence demand matches supply with full employment of resources. This has important implications for policy-making.

Celso Furtado – a Brazilian economist – once told in a graduation speech: “The greater the responsibility of men of thought the more intense is the process of transformation of the society in which they live”. He was talking with the economic students of 1959 of Universidade de Minas Gerais, but I believe it applies to all those who decide to follow the field. So that is more or less what brought me to study PKE. I was questioning myself “how can you really change something looking at it through a framework that does not represent it?” To build solid economic knowledge and from it derive policies and the path for development I would have to understand how the real world functions and acquire the tools to work within it.
By Matias Vernengo - August 23, 2020 No comments:

World-Systems Analysis in a Critical Juncture

The 44th Annual Conference on the Political Economy of the World-System takes place during a critical juncture for both the field of world-systems analysis and for the world-system itself. The first four sessions of the conference bring together papers that reconstruct the theoretical and methodological lineages of world-systems analysis by recuperating neglected foundational texts and by putting the world-systems perspective into dialogue with other critical approaches in the social sciences. The next four sessions deploy tools provided by a world-systems perspective to analyze the multiple intertwined social, political, and economic challenges of the current juncture, illuminating the global crisis and unfolding systemic chaos.
For registration and the program go here.
By Matias Vernengo - August 23, 2020 No comments: 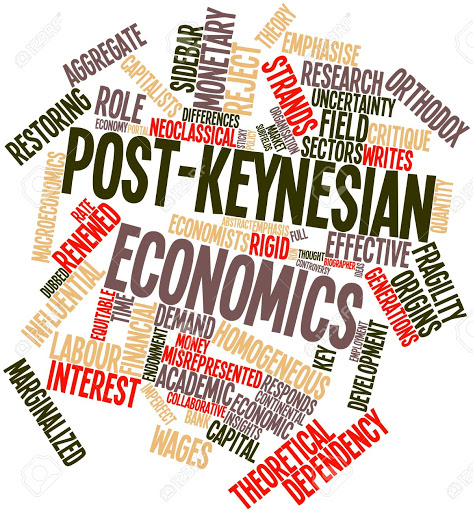 During my bachelor’s degree, I have little access to heterodox literature. What is worst, in most subjects, it was explained that the economy works in a particular fashion everywhere and every time, but without stating that this way was one interpretation of the economy, particularly the neoclassical interpretation. Consequently, most students do not know many alternatives to the economic theory thought to them and after five years (in Latin America) end up thinking that the economy works as in a neoclassical world and that any attempts of applying alternative economic policy it is following an ideological foundation. In this sense, I think it is important to promote heterodox ideas, because it allows critical students to know which schools of thought that are different from the neoclassical school. The problem, however, is having access to heterodox papers and having heterodox teachers within the courses taken. Personally, only in the last years of my bachelor, I had access to some heterodox courses, but this was the exception.

While the division between orthodox and heterodox is somehow necessary it is difficult to select a criterion to define each group. Some authors like Lavoie (2014) derive their classification from the value theory each school considers and sociological features. Other authors like Vernengo prefer to take a more theoretical definition separating strands by the assumptions or mechanisms consider in each school. Finally, mainly among student organizations, there is a more instrumental definition where orthodox is associated orthodox to models and mathematics and heterodox to more social approaches. It is understandable that, after years of neoclassical indoctrination, with models and maximization functions as main tools, critical student movements end up being against the utilization of these tools. However, this last definition is somehow flawed since some heterodox schools such as the post-Keynesian and some part of Marxist school use mathematics and, some orthodox authors, such as the Austrian, reject the use of mathematics.

I believe that heterodox economy should englobe schools which consider that, in the current economic system, there is a group (women, workers, poor people, developing countries) which cannot achieve another group (men, capitalist, reach people, developed countries) better position due to intrinsic mechanisms of the system and therefore, the state intervention is needed to overcome this situation. Differently, orthodox believe, that despite some failures that should be fixed, the intrinsic mechanism of the economic system leads to an optimal outcome and that state intervention will only be needed exceptionally.

Particularly, the post-Keynesian school is part of the heterodox group since has systematically mentioned the most distinctive features of capitalism and pointed out policies that could be applied by the state to overcome it. I believe that one of the main contributions of the post-Keynesian approach was disarming the neoclassical theory showing fundamental flaws in its analysis such as the one raised in the capital controversy. Furthermore, the post-Keynesian approach has evolved from their criticisms to the neoclassical school constructing logic and solid models that explain the economic process based on more realistic assumptions. However, there seems to be room for further development. Post-Keynesian has focused mainly on traditional macroeconomics issues like growth, distribution, and inflation without deeply analyzing the complexity of some other phenomena related to them such as poverty and the social dimension of development. Besides, other issues such as gender and environment are assessed with the same old perspective. For instance, some post-Keynesian papers regarding gender have tried to answer which is the effect of the gender gap on long-term growth, abstracting from the complexities that the gender issue has. However, these limitations can also be understood as opportunities for further developments.

Personally, after taking a mostly neoclassical bachelor, I decided to continue studying post-Keynesian economics because, despite a personal preference for macroeconomics and development topics, I considered that its economic theory always follows strong logical procedures and it is based in solid assumptions achieving, consequently, satisfactory policies recommendations. Furthermore, the post-Keynesian community has a lot of different strands that always raise interesting discussion within this school. Finally, as a general criticism of all heterodox schools, there is very little debate among them, which is needed to present a more solid discussion to the neoclassical hegemony.
By Matias Vernengo - August 22, 2020 No comments: 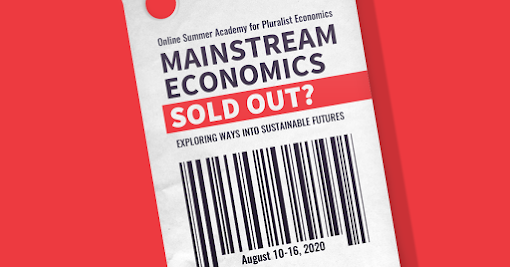 I recently taught a short workshop (online) on Post Keynesian Economics (PKE) for Summer Academy for Pluralist Economics. I basically discussed the definitions of heterodox and Post Keynesian economics, and some critical issues in the theory of output, employment, money and inflation, and income distribution and growth. Students were from several countries, backgrounds, disciplinary fields and stages in their academic careers (from undergraduates to PhD candidates). I will post some brief reactions from a few students on their views on PKE and how they got interested in it, which I think might be of interest, since many have told me over the years that this blog was the only source they had on heterodox economics.

Slowly, but steadily the Wicksellian concept of a natural, normal or neutral rate of interest is making a come back and becoming more relevant and cited than Friedman's natural rate of unemployment and its awkward twin the Non Accelerating Inflation Rate of Unemployment (NAIRU).

Note that up to Friedman's infamous presidential address the normal rate dominated the field. But in all fairness, even thought it has lost space it seems that Friedman's natural rate of unemployment has a lot of inertia, and might be with us for a while.