Merkel, Scholz, the German Social Democrats and the Meaning of the Left

Angela Merkel is stepping down, and as often happens in these circumstances (or when someone of historical importance passes; see here for my review of Thatcher and Volcker obits) there is a flood of analysis of their contributions. Merkel is no exception, and most 'serious' outlets have suggested that she was a great stateswoman, and that she managed to save the euro (an honor she often shares with Mario Draghi), the European Union and provided leadership in the midst of the vacuum caused by Donald Trump (see here, or here, for example). The newspaper of record, linked there, says that: "Chancellor Angela Merkel steered Europe through crises, and Germany has boomed during her tenure." I kid you not! Yes, boomed. The actual real GDP growth was about 1.1 percent on average during her tenure (as per graph; data from the Conference Board). 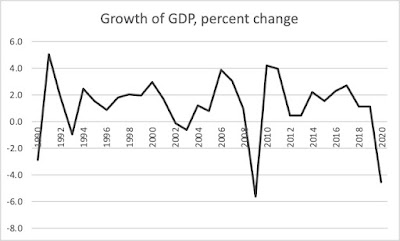 Note that there is no acceleration of growth, that has remained low since reunification with Helmut Kohl, and with the brief interregnum of Gerhard Schröder, the center-left (more on that below) leader of the social democrats in the early 2000s. The New York Times suggests, not incorrectly (at least on this) that she leaves many economic problems behind, but argue that those stem from lack of investment in education (the 'human capital' mantra) and on high-tech technologies. Note that investment often follows growth, and that has been anemic in Germany, and productivity follows growth, including in the high tech industries. It is demand driven. Merkel did not create the neoliberal model, but she certainly followed it.
Her legacy should be tied to the euro, and to Greece (I wrote quite a bit on Greece over the years; see here, and in the other blog here starting even earlier in 2010), and there her legacy of austerity, fiscal adjustment, which allowed Germany to maintain fiscal and current account surpluses (the measure of her success, I would guess), is an undeniable disaster. Greece GDP never recovered (see figure below; same source). 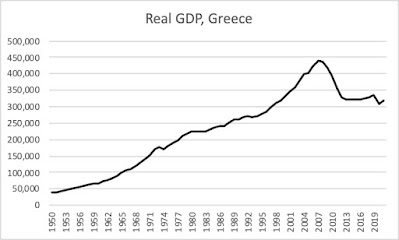 In other words, nobody should think that these is something to be emulated. The reason right-wing, photo fascist parties, like some of the craziest stuff that one can see in the United States are possible in Europe is because of the policies that she adopted. Of course, as I noted these policies precede her, and Kohl, the German version of Reagan and Thatcher deserves a lot of the credit, both as instrumental on the unification, which still has important implications for the levels of employment in the ex-Eastern Germany, and the policies that led to the euro. Of course, it took a social democrat, Schröder, to promote the labor market reforms (essentially, more flexible markets, making it easier to fire workers, and providing lower benefits for the unemployed) and a policy of wage compression.
And that brings us to Olaf Scholz, Merkel's finance minister, and the leader of the social democrats (which were in many ways a reference for the left globally at some point in the very distant past), which are uniformly described as center-left (NYTimes here). I will not spend too much time discussing that, but I would note that a left of center government must have policies to promote the wellbeing of the working class, including higher wages and something that resembles full employment. The German Social Democrats are not that. And if Mr. Scholz manages to form a coalition government, it will be with the Greens, which will push for degrowth (on that see this old post), and perhaps with the neoliberal Free Democratic Party, mostly people that have not seen a fiscal adjustment plan they did not like. So Merkel's legacy lives on.
By Matias Vernengo - September 29, 2021 No comments:

Debt in foreign currency or Too Much Government Intervention?

Interview with an Argentinean radio (yes, in Spanish) on the Evergrande collapse and its possible consequences. It is clear to me that the dangers come more from having debt in foreign currency than the typical critique about crony capitalism, and the lack of credibility that The Economist, for example, has put forward. In The Economist view:

Evergrande shows the importance of deeper financial reforms. But what might they look like? Liberal reformers have longed for a clean-up of bad debts, a loosening of controls over prices (including the exchange rate), transparency and independent courts that can enforce property rights. Such a system would allocate capital better and be less prey to moral hazard.

Seriously. For those that think that the craze about financial liberalization was over with the 2008 Global Financial Crisis.

Tom Palley on Anti-China Fever in the US 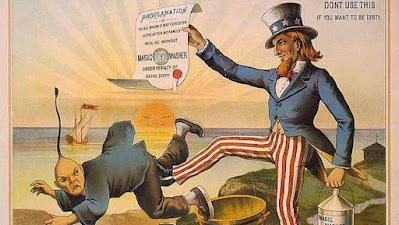 Short post by Tom on the Sinophobia that has become more common in the US with the rise of the trade wars and the pandemic. He says: "Much of the United States (especially Washington, DC) is in the grip of a contagious lethal anti-China fever which is spreading fast. Even people I usually admire and respect have become infected. Reason and facts have lost all capacity to inoculate."
Read rest here.
By Matias Vernengo - September 21, 2021 No comments: