The webinar on Policies for Prosperity organized by LP Rochon, and with Tom Ferguson, Mario Seccareccia, and Anna Maria Variato. There was some glitchy at the beginning and Tom's talk was not recorded. Mine starts in minute 29.
By Matias Vernengo - June 25, 2020 No comments:

Power and dominance in the Colonial and Post-colonial times

The recent uprising and protests, in a large number of the White-settled countries in connection with the murder of an unarmed Black-American, George Floyd by a White policeman on duty in Minneapolis has re-opened pages of history relating to unequal power , with state- sanction of White supremacy over ‘others’ having a subordinate status. As history unfolds it, the over-powered included the slaves acquired from Africa, the indentured labour shipped from tropical Asia, while colonies like India providing the flow of unpaid ‘drain’ of surpluses from taxes collected within. The pattern of racial dominance seems to have continued , even today, in the incapacitated George Floyd’s choking to death.

One observes the vehement reactions to the murder on part of the present generation, both Whites and the non-Whites, mostly from Northern America and Britain. This comes not only with the claim that ‘Black Lives Matter’ but with questionings of repressive policies in the past, with oppression of the African slave community in US and elsewhere, and of labour from the tropics. The anger reflects itself in massive protests by the youth in different corners of USA as well as in Canada, followed by the overthrown statues in UK. The dismantling include the statue of Edward Colson in Bristol , the Deputy Governor of the then Royal African Company which had the monopoly in England, from 1662, of trade in precious metals and slaves along the west coast of Africa. Colson. organised transport of 84000 Africans to different parts of the world as slaves. Well- connected to the ruling elite including the Royalty, Colson made a fortune while leaving a mark in Bristol in terms of various buildings which continue to bear his name today.

Protests in England, spread beyond Bristol to Oxford and London, has not been just targeting the symbolic presence of the colonial era in statues of leading statesmen and wealthy traders of Britain in years of Britain’s global supremacy. The voices bring to the fore the need for a re-read of colonial history - the modality of the colonial past engineered by statesmen like Robert Clive, Cecil Rhodes and even Winston Churchill - rewarded for the successful handling of colonial matters. While this may mean further academic research on issues relating to Colonialism , the anti-racist messages, hopefully, will also help in arresting the adversities faced by sections of society identified as the ‘other’ by the White community.

Digging up the historical records of oppression, one recalls , in US, the African slaves in the background of the Civil War, and the Colonial past for the British Empire, details of which may help in excavating further details of the mode of persecution. One comes across the loot of the taxed revenue from Colonial India by Britain, the ruling nation , all in the pretext of meeting the so-called ‘Home charges ’ to meet overseas expenditure.As pointed by Indian nationalists like Dadabhai Naoroji the tribute paid could be characterized as a Drain of resources! One also needs to reckon ,in a similar context, the oligarchy between the Secretary of State for India in London and British silver merchants who collided to keep out Bombay silver traders and banker like Chunilal Saraya from silver trade as needed for coinage in India. Similar instances of coercion, malpractices and misappropriation abound in the history of British domination in Colonial India.

Parallel to the drain of resources which consisted of the unpaid transfers of revenue from colonial India, there ran a parallel drain from India, which was the flow of indentured labour. Those were shipped to the British owned plantation islands in Mauritius, Demerera ( now Guyana) and Jamaica , to work in sub-human conditions , and to fulfil the commercial interests of the British elite owning such estates. The flow was much needed in the plantations as slavery was banned all over the British Empire by an Act passed in the British Parliament in 1938. Incidentally, the legislation, advanced by the slavery abolition lobby in England, was also motivated by their interest in achieving efficiency by having a ‘ free market’ of labour . However, the abotion of slavery, followed by other forms of deploying labour, was far from delivering a free labour market. As for planters, the easiest way to keep the former slaves attached to the estates was to have them as apprentices over a short period. It was virtually a forced scheme of four to six years for the former slaves above age six and a half , thus in effect a form of compensation to the planters. Moreover, the emancipated slaves were forced to provide 40½ hours a week of unpaid labor to their former masters over the six years of apprenticeship. The scheme ended by 1838, largely with reluctance of ex-slaves to continue as plantation workers .

By this time indenturing of labour from India started almost immediately with a fresh stream of involuntary workforce procured from there. Given the arduousness of the work and the sub subsistence wages the planters were ready to pay, it soon became apparent that it was only those who were too poor to pay their own passage to the islands would accept such employment . Thus the planters' targeted the denser populations of Asia which included those in the poverty and famine-stricken India. “Importation of East Indian Coolies", as pointed out by the Royal Commission of Labor ( 1892), “did much to rescue the sugar industry from bankruptcy”.

Details are available on the miserable state those workers faced in the distant islands, having been recruited with no knowledge of the destination or the terms of the make-believe contract. On reaching the workplace, their movements were under strict control with penalties including the whipping by cat-o-nine tails to inflict severe punishments. On the whole, the flow of the recruited Indians as above signified a parallel process of drain from the subcontinent, of people often ‘ignorant’ of the destination or the life waiting there.

Voyages to carry labour were organised ,among others, by the well connected Liverpool merchant, John Gladstone, familiar with the earlier slave trade. Owning estates in plantations and a shipping company he was responsible for initiating shipments of indentured labour from India by using the contact of Gillanders, Arbuthnot and Company in India with a request for the “… supply of 100 young, active, able-bodied” laborers on contract for his estates.” That he was powerful enough to stall a temporary ban on such shipping was evident with his success in persuading Robert Peel. British administration was very much supportive of the indenturing project which helped both investments on those estates by rich people in London City and the mercantile trade in processing raw sugar from there.

Power, based on proximity to ruling authorities, has been responsible for using race as a tool for subordination. This is evident in the continuing pattern of oppression, from the colonial era down to the current episodes of brutality in the most advanced regions . Refusal and disapprovals, on part of the current generation, to accept the past, will hopefully help to shape a future which conforms to humanity.
By Matias Vernengo - June 24, 2020 No comments:

Di Bucchianico on Krugman and the Liquidity Trap 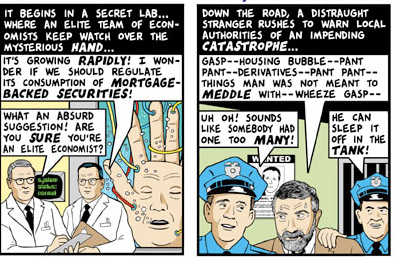 New paper on the problems of Krugman and the Liquidity Trap argument (some will be able to download if for free, and I recommend this version; however, there is a previous working paper linked at the bottom for those unable to open).


Krugman’s ‘liquidity trap’ model constituted a ground-breaking contribution by attributing the long-lasting Japanese stagnation to a negative natural interest rate. Our critique to such a proposal will focus on three aspects. First, we will question the logical structure of the model, providing an alternative interpretation of its closure and arguing that aggregate demand has no crucial role in it. Second, we will argue that a negative natural interest rate can emerge only after a series of overtly restrictive assumptions in a model that does not treat capital and avoids long-run equilibrium analysis. Finally, we will discuss the mainstream literature which followed up until the recent rediscovery of the Secular Stagnation Theory. Within that line of literature, the key features of the ‘liquidity trap’ model continue to occupy a prominent role, thereby letting the critical issues that have been singled out resurface. Our conclusion is that the ‘liquidity trap’ explanation did not provide a satisfying rationale for Japan’s stagnation and cannot describe later economic predicaments either. A comparison with Post-Keynesian models shows their ability to offer insightful policy prescriptions without relying on those shaky theoretical foundations.

Note that an important part of the argument is the critique of the natural rate of interest, something we have done extensively over many years in this blog, and of the notion of a negative one in the context of Summers' discussion of secular stagnation (also done in this blog; see for example here and more recently here in the context of a debate with Stephanie Kelton and MMTers; btw her book is out and anybody wanting to reviewed it for ROKE send me an email; I look forward to reading it too).

The important thing in the paper is that it goes beyond the capital debates critique, and shows the extra restrictions needed for Krugman to get his results, including some interesting thoughts on the problems associated with intertemporal models.

PS: ROKE will soon publish a paper by Serrano, Summa and Garrido Moreira (Fall issue) in which other limitations of the negative natural rate are explored. 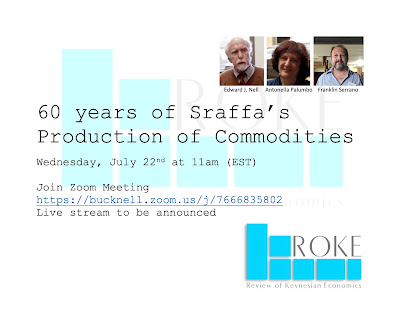 Policies for Prosperity: from COVID-depression to Sustainable Growth 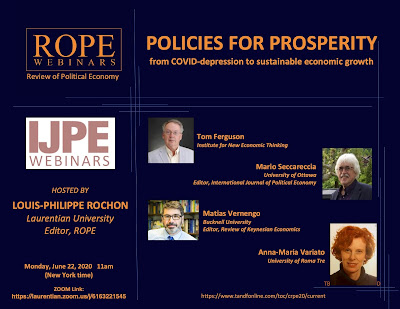 With Tom Ferguson, Mario Seccareccia, and Anna-Maria Variato, organized by L-P. Rochon. Next Monday on a computer near you.
By Matias Vernengo - June 16, 2020 No comments: 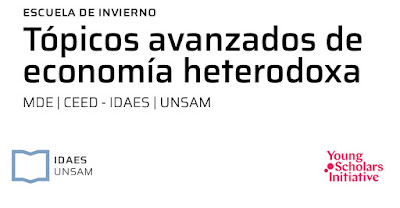 Course on the Argentinean Economy in Portuguese

For those interested in the Argentinean economy, and that can understand Portuguese, I'm teaching a virtual course on the Rise and Fall of Argentina with my friend Paulo Gala. Some teasers are available here. Below the first class.

Btw, my suggestion is that basically there's no fall, if the economy never rose in the first place.
By Matias Vernengo - June 05, 2020 2 comments: