Must read interview with Jamie Galbraith.
By Matias Vernengo - February 21, 2011 No comments:

Government Shut Down for What?

So it seems that Boehner is going to pull a Gingrich.  Both the president and the House Republicans’ plans cuts are relatively minor.  But the question is why cut spending now.  The only reason spending cuts are necessary, if you agree that the crisis was caused by collapsing demand (not a supply shock) is because there is too much demand recovery.  That would be signaled by full capacity, rising interest rates, and/or rising prices.
In the first case, industrial capacity utilization was in January 2011 at around 76%, below the average for the 1972-2010 of close to 80%.  In the case of interest rates, both short term and long-term rates are incredibly low.  So if the economy is not at full capacity price pressures are not driven by demand.
The US government can, contrary to you, borrow at low rates.  The question is not so much if it should do it, but for what purpose.  I would suggest that they give me more money, but I’m sure most people will be bitterly opposed!
By Matias Vernengo - February 21, 2011 No comments:

And now for something completely different

One image worth a thousand words, from the Congressional Budget Office, via Mark Thoma's Economist's view.

ISLM: what is it good for?

The ISLM model persists in most undergraduate textbooks, and even though it has vanished from graduate courses*, it remains central to the way economists think about policy issues.  The main reason it survives is not so much that it allows a relatively simple intro to policy issues to undergrads, as some argue, but the fact that it captures the interaction between real and monetary phenomena which was central for Keynes’ General Theory (still worth reading), and is flexible enough to accommodate divergent views, often reflected in different inclinations of the curves.

It is also true that the conventional interpretation of the ISLM is fraught with problems.  But the ISLM model is incredibly flexible and can accommodate most critiques.  For example, a few years back a reader asked Mankiw why he still taught that the Fed controls money supply, rather than control the rate of interest, which would be more relevant.  His reply was not particularly good (just an ad for his book), but the fact remains that it is easy to change the LM to reflect the fact that central banks control the rate of interest.  The ISLM with a horizontal LM is sometimes referred to as the ISMP, where MP stands for monetary policy rule, and for the most part this is done for the benefit of students (i.e. you can buy the new text with the updated ISMP model for $150!).

The ISLM can also accommodate an investment function in which the level of activity, rather than the rate of interest, is central, which is more empirically accurate, and different consumption functions in which other elements besides disposable income appear.  More importantly the ISLM does not imply a natural rate of unemployment, which often appears in the supply side part of the macro course.  In other words, the ISLM allows for relevant discussion of policy issues, and clarification of policy differences.  Besides, compare this model with the consumption theory you get in micro, and this is still one of the most relevant things you can learn in economics.  The other would be not to trust economists!

* David Colander suggests that it’s not taught in graduate courses because more sophisticated dynamic stochastic general equilibrium models (DSGE) are more important.  DSGE models are based on the aggregation of individual maximizing behavior, and have been less relevant for policy analysis than old fashion macroeconometric models based on the old Keynesian theory.  The whole conference on the ISLM, in which you can find Colander’s paper is available here

You should listen Diane Rehm's show today. Naked Keynesian Jamie Galbraith was there! 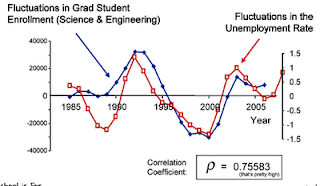 Logic suggests that it is unemployment that causes the increase in graduate student applications, but I would not be surprised if an economist claims it is the other way round. The point is simple. Perhaps one way of bringing down both the normal unemployment level, and the Beveridge Curve is to promote the creation of jobs now!
By Matias Vernengo - February 15, 2011 2 comments:

So last year, during our ongoing battle on Keynesianism and common sense, a Fox News' bobblehead doll coined the term Naked Keynesianism.  It was an attack on Jamie Galbraith's views on deficits and debt, and on the need for fiscal stimulus.  The full video and commentary are here.  So Jamie is corrupting our youth, and as far as I know I am too.  You'll find here a few posts that should help those interested to understand why Naked Keynesianism is like Naked Logic.  If you are against logic or facts, just go here.
By Matias Vernengo - February 15, 2011 1 comment: