This paper argues the mainstream economics profession is threatened by theories of the financial crisis and ensuing stagnation that attribute those events to the policies recommended and justified by the profession. Such theories are existentially threatening to the dominant point of view. Consequently, mainstream economists resist engaging them as doing so would legitimize those theories. That resistance has contributed to blocking the politics and policies needed to address stagnation, thereby contributing to a political vacuum which is being filled by odious forces. Those ugly political consequences are unintended, but they are still there and show the dangerous consequences of the death of pluralism in economics. The critique of mainstream economists is not about “values” or lack of “change”: it is about academic practice that suppresses ideas which are existentially threatening. 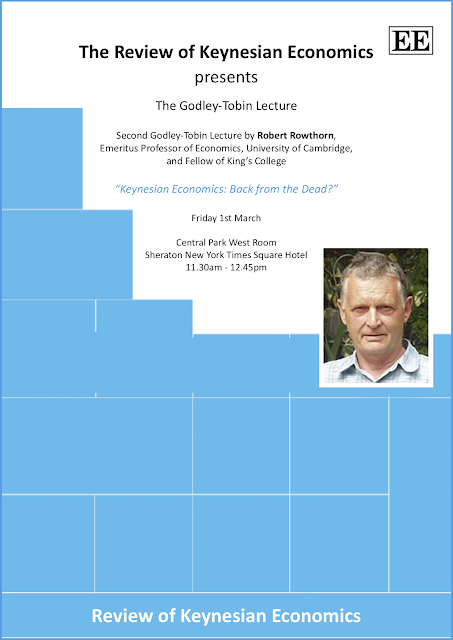 Please note the change in date and venue. Bob Rowthorn's Godley-Tobin Lecture. titled “Keynesian Economics: Back from the Dead?” It will be Friday 1st March, in the Central Park West Room, at the Sheraton New York Times Square Hotel 11:30am - 12:45pm
By Matias Vernengo - February 06, 2019 No comments: