Maradona was more than just an extraordinary footballer. He was also a complicated social icon. That further distinguishes him from other footballers, though Pele also has some of that… and it is great to see young footballers like Marcus Rashford taking up that mantle.

He was both rewarded by and terribly exploited by the system. The system treated him like a “race horse”. They wanted him to play at all cost and pumped him with drugs. They did not care about the physical and psychological costs to him. That contributed to his addiction. Maybe he would have gotten there on his own owing to personality reasons, but the addictive pain-killers they fed him sure gave him a healthy shove in that direction.

He came from great poverty, from a shanty town. He never hid that and insisted on keeping the connection. I’m told he had tattoos of Fidel Castro and Che Guevara. He also had a relationship with the Pope (Francisco, not Benedict II or John Paul II). That politics speaks well of him, even if it was not carried through with the consistency of an intellectual or political activist.

As for the “Hand of God” goal, it obviously sits badly with England supporters. But in a way it fits with Maradona’s personality and social icon standing – a sort of roguish Robin Hood’s goal. I’ve come to accept it and even enjoy it.

Did you know that in Argentina, before inflation made them irrelevant, they used to call the 10 (diez) peso note a “Diego”? That is how much people loved him.
Published originally here.
By Matias Vernengo - November 27, 2020 No comments:

Capitalism Alone Against Itself: Liberal Democratic versus Political Capitalism 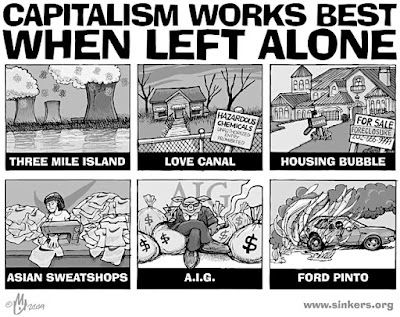 I finished Branko Milanovic's thought provoking Capitalism Alone this summer. But I haven't had much time to write on the blog, as you might have noticed. This is certainly not a review, and I would definitely suggest that you go and buy the book as soon as you can and read it. It is a serious discussion of the future of capitalism, that word that, as Heilbroner often reminded us, was at the center of the discipline, but seldom discussed openly by economists. He cited, if memory doesn't fail me that it didn't appear in Mankiw's Principles textbook, at least back then in the 1990s, when it was published. I always note that Allan Meltzer wrote a little book titled Why Capitalism? were he makes no explicit effort in defining it, even though a definition can be gleaned from it.*

The definition most economists use leans more on Max Weber than Karl Marx, or the materialist tradition of the surplus approach upon which he built on. Branko is a pluralistic economist, well read and influenced by several authors, not all of them conventional. The discussion of the definition of capitalism is complex, and he separates, in its modern version two archetypes of capitalism, that are in a mortal battle for global hegemonic power, namely: Liberal Meritocratic Capitalism, represented by the West, and particularly by the United States (perhaps more credibly now after the election), and Political Capitalism, represented by the rise of the rest, with China at the head.

When assessing whether China is capitalistic Branko does use the conventional Weberian definition (p. 87), but that seems to be a pragmatic approach to provide the basis for his argument that China (and Vietnam, Malaysia and Singapore too, p. 91) does conform to the Weberian notion of political capitalism, a term used by Weber to discuss ancient forms of capitalism. But there is a concern with how elites maintain control by non coercive forces in Liberal Capitalism, and about the need to create an indigenous capitalist class in Political Capitalism. Both point out to alternative issue of class conflict, of course, and how surplus is extracted from workers, and points to an alternative view of capitalism. There is, in somewhat Marxist tradition a preoccupation with the role of the bourgeoisie, and an nod to Wallerstein that suggested that there are no capitalists without state support, something I would like to have seen more in the book (p. 116).

In fact, the secondary role of the state, to some extent, the absence of a more thorough discussion of the developmental state in the case of the Chinese experience, is one of the problems with the book. Another would be an emphasis with issues of corruption, which seem to me to be of secondary importance, even if the problem might have increased with financial deregulation, and the rise of tax havens. The emphasis of the book is on the changes associated to the increasing mobility of labor and capital and the problems it poses for both systems. Branko thinks that the welfare state is vulnerable with free labor mobility (p.156), undermining the democratic process in liberal capitalism, and that capital mobility, which he sees more through the lens of Global Value Chains, rather than portfolio flows, and that would lead to higher growth in poorer countries, reducing the need for labor mobility. The book also debunks a few myths, like the notion that robots are coming for your job, or the idea that a Universal Basic Income (UBI) would be a panacea for the economic problems caused by globalization and technological change.

* Invariably it is based on notions of the profit motive (some form of rationalization) as required by markets, and private property, or Weber (plus North, if you prefer). For an alternative discussion see this old post on a view based on the surplus approach, including a critique of the Weberian naturalization of capitalism as something that existed in the past and that explains the golden ages of antiquity.

The Portrait of the Heterodox Economist as Young Man 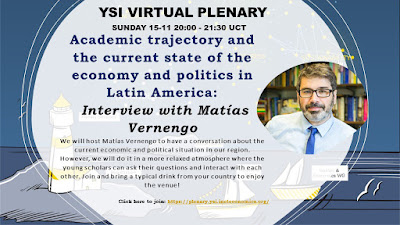 Tomorrow at 3pm (EST) a frank and informal talk about heterodox economics, my personal trajectory in the profession and discussions about political economy in Latin America with some young scholars from the YSI initiative. Join here.

My talk at the Universidad Centroamericana José Simeón Cañas (UCA), El Salvador 20/10/2020. On capital controls and development and in Spanish, of course.
By Matias Vernengo - November 10, 2020 No comments:

The New Failed States and the reaction to COVID-19 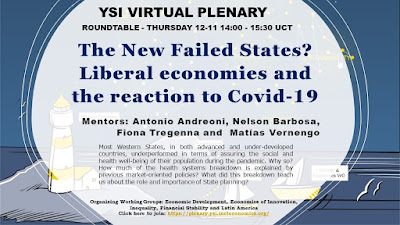 Thursday at 9am EST, a roundtable on the "New Failed States" with Antonio Andreoni, Nelson Barbosa, Fiona Tregenna and yours truly. For an old post on the topic go here.
By Matias Vernengo - November 09, 2020 No comments:

Is the Worldly Philosophy Dead?

Instead of videos a series of podcasts on the history of political economy, and its relation to economic policy in the United States. This is based on a course I teach for undergraduates.
By Matias Vernengo - November 07, 2020 No comments: