Kalecki's alternative to Keynes and White and its consequences

Partial video (my fault) of the conference about the book edited by the late Jerzy Osiatynski and by Jan Toporowski published by Oxford University Press. Our chapter on Prebisch with Esteban Pérez is available in a preliminary version here.

I was teaching about deficits and debt this last week. If you know me and follow this blog, you'd know that I always emphasize the importance of the distinction between debt in domestic currency and debt in foreign currency. Functional finance authors (and MMT too) are correct in noting that a country cannot default on debt in its own currency (for a model of a currency crisis and default, in foreign currency go here; as afar as I know the only formalization of a PK alternative to the Krugman model).

At any rate, teaching about the US for mostly US kids, that is not an important distinction, since the US has only debt in its own currency. Most of them thought that the current levels of public debt are too high (with respect to what you may ask, the ability to repay or the kind of society we live in?). I would hope that by them most of them tend to think that we do not have enough public debt. I mean the amount of homeless people, or the windshield washers in the corners of the streets, suggest that we need more public spending. The graph below shows the break between public and private debt in the US. 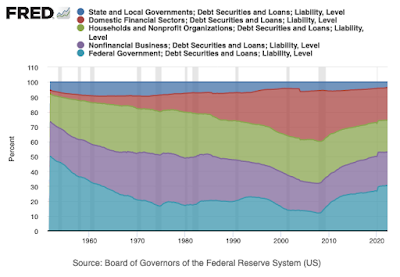 It is clear that the amount of public debt shrank from about 50 percent of total debt in the early 1950s to something around 10 percent right before the 2008 financial crisis, and most of the growth was in the financial sector. Since then public debt has grown to about 30 percent. Household and corporate debt did increase over time, but not much. The important lesson in the case of an economy like the US (with debt in its own currency) is that public debt is safer than private debt, since the government cannot default and its spending does affect the level of activity and the ability of the private sector to thrive.

Kalecki's Alternative to Keynes and White's Plans its Consequences 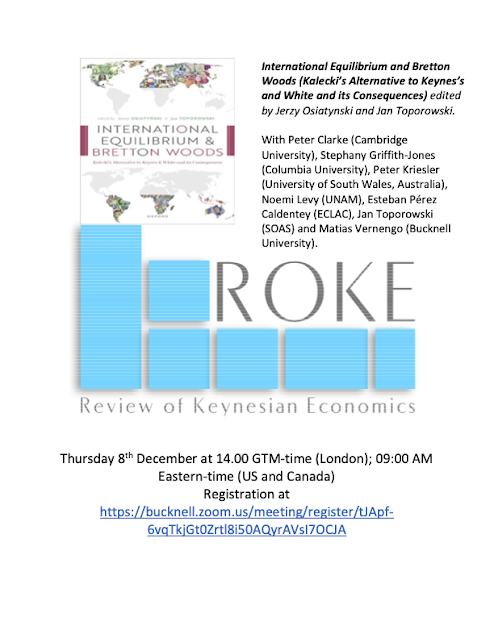 Webinar on Kalecki and his views on the Bretton Woods agreement. To register go here.
By Matias Vernengo - December 02, 2022 1 comment: