The conversation on inflation with Marc Lavoie at the Fields Institute in Toronto. I think that there was an agreement, between us, and most people in the room that the oligopolistic view of inflation does not hold water. I tried to discuss the Argentinean case on the basis of a piece that I co-wrote with Fabián Amico and Franklin Serrano, published in the local version of Le Monde Diplomatique online. A longer version, also in Spanish, here. An English version is in the works, btw. 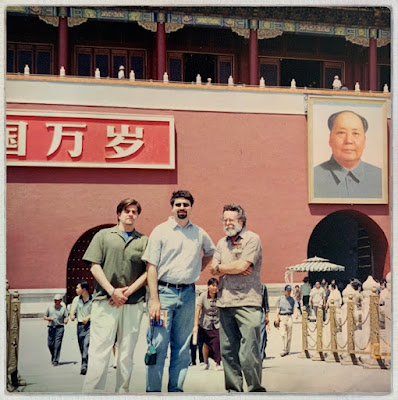 With Lance in Beijing (2001)
I took Lance’s macro class in the Fall of 1995 at the New School for Social Research (NSSR), and then was his Teaching Assistant for two years. The book we formally used was Income Distribution, Inflation and Growth: Lectures on Structuralist Macroeconomic Theory, in which the terms (not the concepts) for wage-led and profit-led economies were first used (at least that's what I think; profit-led does not appear in the index, I must note). But classes were based on his notes, on what became his next book Reconstructing Macroeconomics (he thanked me for all the input in my copy; I had to learn how to read his handwriting, which was not easy). In many ways, my thinking was influenced more by the Sraffian professors at the NSSR, both John Eatwell (I was also his TA in the micro class) and Ed Nell (who really was the first to discuss functional finance in my classes), in part because the blend of Cambridge left-of-center Keynesianism and Latin American Structuralism, that Lance exposed, was more familiar to me coming from Brazil.

My plan was to work on inflation theory (and I did write a conflict model, that can be seen as being in Lance’s tradition later on; in my view his best book is the one that is less formal, and is on inflation, his Marshall Lecture at Cambridge, Varieties of Stabilization Experience; at the time I first read it I didn't know that the title was a quote from Henry James; the other candidate is his book with Eatwell Global Finance at Risk. Both are more books than manuals). But I started working with Wynne Godley on his stock-flow model for the joint Center for Economic and Policy Analysis (CEPA) and Levy Economic Institute project. A year into the project I told Lance that it would make sense if I worked on something related to the project, namely the sustainability of the US external account. Lance was very nice about it, and not only went along, but also provided funding, since I received CEPA’s dissertation grant.
I ended up writing something that was very close to Massimo Pivetti’s monetary theory of distribution. The theory at least. Lance provided comments and feedback, and, at some point, told me that I was obsessed with this monetary distribution thing (I was, indeed). But he also provided support, and his criticism was always constructive. Lance was the best supervisor one could have. He guided the work with frequent conversations, read and criticized what I gave him to read, and, after it passed certain standards, approved it, even if it wasn't exactly a Lance Taylor dissertation. He never tried to mold my thinking, or force me to work on own his terms. Sadly, that isn’t the norm in academia. I think he had been lucky with his supervisor too. He once spoke fondly of Hollis Chenery (his supervisor; not his mentor, which I think was Rosenstein-Rodan; I might be wrong), because he protected the radicals, which were under pressure in the late 1960s at Harvard. His intellectual generosity, among several other qualities, is something that will be deeply missed.

Lance was open to alternative methods, and approaches, what he called closures (certainly more than I am), and his comparative method was influenced by other disciplines, the qualitative "thick descriptions" a la Clifford Geertz that he liked. I actually ended up reading a bit of Geertz because of my conversations with Lance, particularly when I was the assistant director at CEPA (he was the director) and he organized a book on several comparative studies of liberalization in peripheral countries (the one on Brazil, which was supposed to appear in a previous volume, and should have been written by Edward Amadeo, was eventually written by me; photo above is from one of the conferences that led to that book). Geertz saw anthropology, as he famously put it, "not [as] an experimental science in search of law but an interpretive one in search of meaning." The thick description was essentially the interpretive work of the ethnographer. Lance took that view, in some sense, of economics, blending the description of the historical and institutional features of peripheral countries, with relatively simple models in what Paul Krugman (a co-author; Paul's first paper was the one on contractionary depreciations with Lance) called the MIT or Solow type models (my only other model in that sense, is the currency crisis one that puts Krugman's one upside down).
I tend to think that this methodological stance is Lance most enduring legacy, and the one that had the most influence on my own work. Most discussions of his work emphasize the gap models (which I think are problematic, the savings and fiscal gaps in particular), or the stagnationist model of growth, which builds on Bob Rowthorn's seminal Neo-Kaleckian growth model (and also on Amitava Dutt's model, which I think was part of his dissertation work under Lance). Some might even think that it was the reversal of his views on the role of exchange rates in development, his paper with Roberto Frenkel on stable and depreciated exchange rates as engines of growth (which can be seen in line with Luiz Carlos Bresser-Pereira and Jaime Ros views, and as being at the center of New Developmentalism). Others might think it's his work on Social Accounting Matrices that prefigured, and went hand in hand with his appreciation for Wynne Godley's stock-flow consistent models (on Wynne's methodological stance, see this old post).
In a way, all these models, and others (I could have added the Minsky crisis one, that is often neglected), to some extent show the use of models for Lance. He was somewhat eclectic, and use them to illustrate some of the issues with developing countries. But for him that had to be complemented by the interpretive thick descriptions. In my view, the models per se were less relevant for Lance, who was an unorthodox lefty that remained so, as someone remembered recently, even as the whole world moved to the right in the 1980s, and 1990s (he told me that a director of research at the World Bank, that had become a neoliberal, told him in his last visit to that institution, if he wasn't ashamed for still defending those structuralist views). And he did leave MIT for the NSSR, which was a strong signal of his political views. The simple model allowed him to tell the stories.
I have a tendency to prefer greater consistency in the models, and I'm less keen on accepting some possibilities of neoclassical/monetarists closures for the real world. But his methodology, which in some sense contrasts with the large stock-flow models that my other mentor (Wynne) liked, is certainly something I think it is a more fruitful way of thinking about macroeconomic problems. But again the specific models per se are less relevant, and the thick description that they illustrate with simplicity matter more.
By Matias Vernengo - September 10, 2022 No comments: