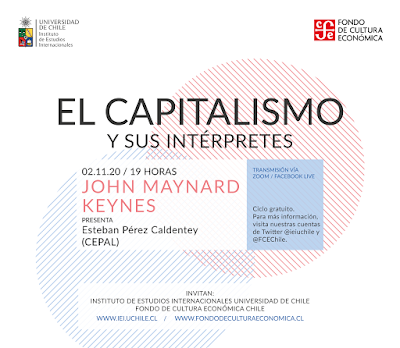 One of my favorite economists, and John Maynard Keynes too. Don't miss this lecture, in Spanish of course, on one of the central economists of the 20th century and its relevance for the periphery, particularly during the current pandemic. I'll post links to the Zoom and Facebook stream soon.

The problems of Neoliberalism in Latin America

My talk with Luis Nassif (in Portuguese) about neoliberalism in Latin America. We didn't really get to discuss the current cases of Argentina, Bolivia, and Chile, but talked about it more generally.
By Matias Vernengo - October 27, 2020 No comments:

Rising housing costs and stagnating real wages are the primary causes of worsening housing affordability in Utah. The dismal wage growth is the result of a larger nationwide upward redistribution of wealth and income, which can be attributed to the following: a failure to adhere to full employment objectives; fiscal austerity; and various labor market policies and business practices allowing the higher social strata of a professional class to capture ever larger shares of economic growth. This is the result of institutional transformations that have exposed workers to the vulnerability of higher turnover, resulting in higher averages of unemployment, particularly worsened by the COVID-19 pandemic induced recession. For instance, from 2009 to 2016 real income only grew at 0.31% per year while rent crept upward at a rate of 1.03% per year in 2017 constant dollars. Slow and unequal wage growth stems from a growing wedge between overall productivity and the pay (wages and benefits) received by a typical worker. 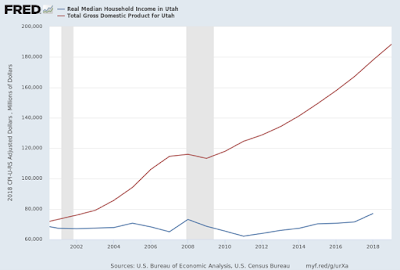 Of particular note is the extent to which housing security has become directly dependent on price fluctuations driven by investment property, which excludes lower-income households from the housing market. A plausible explanation for why rents and home prices have increased is due to developers more interested in building or rehabilitating for upper-income households or high or ultra-high net worth individuals, for purposes of land-value maximization. While these newly built and rehabilitated structures increase the number of housing units relative to demand, which increase vacancy rates, they are essentially vehicles for wealth storage. As such, simply increasing the housing stock may have a much smaller effect on affordability than what could be anticipated. 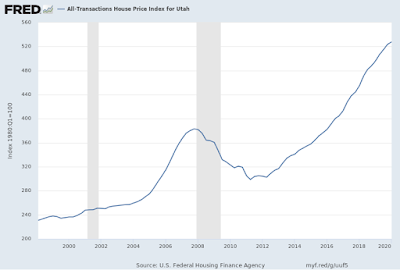 Housing prices have skyrocketed over the past two decades, significantly contributing to chronic economic insecurity in relation to real wage stagnation.
What works? Empirically verified: rent control, mortgage assistance for homeowners, and transfer payments to vulnerable populations, along with allowing wages to rise with cost of living, which translates to policies that guarantee living wages, e.g. living wage ordinances and generous unemployment insurance disbursements. In addition, strict regulations as to what type of housing is built and where it can be built are requisite. Innovations in construction techniques and design would not only lower the costs of development, but also guarantee that dwellings are safe and adequate. If the private market is unable to achieve such sustainability, then more public oversight and control is necessary.

Housing market pressures drive up rents and home prices, making housing unaffordable and pushing long-time residents out of their communities, or into homelessness. Sometimes, these pressures result from targeted investments aimed at improving the quality of distressed neighborhoods. They can also result from gentrification, rapid growth in local jobs and population, or rising income inequality, all of which are not mutually exclusive. A countercyclical policy reaction to said pressures (solution 1) plays an essential role in moderating these market dynamics. Protecting against the displacement of long-time residents is vital; this also includes promoting spatial variation of affordable, i.e. mixed income, to prevent spatial inequality concerning the geographical segregation between “wealthy neighborhoods” “poorer neighborhoods.”

A stable and affordable home not only supports a household’s economic security and well-being, it can also help build wealth. Yet, many US households, particularly households of color, face steep barriers to buying a home or sustaining homeownership. Not only do people of color have lower homeownership rates than white people, they are less likely to sustain their homeownership. Black homeownership rates dropped significantly after the Great Recession to levels similar to those before the passage of the federal Fair Housing Act in 1968. Strict regulations against redlining, for example, can potentially expand stable housing and wealth-building opportunities to the nation’s increasingly diverse population.
In short the solution requires:
By Matias Vernengo - October 24, 2020 No comments: 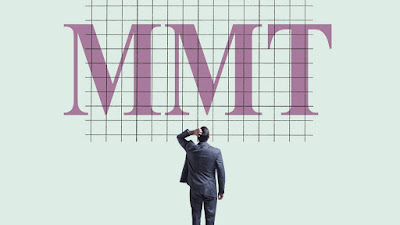 In the new issue of the Review of Keynesian Economics. From the abstract:

The essential claim of Modern Money Theory (MMT) is sovereign currency issuing governments, with flexible exchange rates and without foreign currency debt, are financially unconstrained. This paper analyses the macroeconomic arguments behind that claim and shows they are suspect. MMT underestimates the economic costs and exaggerates the capabilities of deficit-financed fiscal policy. Those analytic shortcomings render it poor economics. However, MMT's claim that sovereign governments are financially unconstrained is proving a popular political polemic. That is because current distressed economic conditions have generated political resistance to fiscal austerity, and MMT fits the moment by countering the neoliberal polemic that government lacks fiscal space because it is akin to a household.