My talk at the Universidad Nacional de Colombia last Friday, in Spanish of course. Part of the argument is that Prebisch, contrary to what is often assumed, moved from an argument that emphasized the role of the external constraint in leading to underdevelopment during his United Nations years, to one that put the emphasis on the patterns of domestic consumption, and its negative impact on the surplus, following the literature on stagnation, in his last book on peripheral capitalism. I suggest that the change is problematic.

Gatekeepers and herd behavior: On Tooze and the radicalization of Krugman 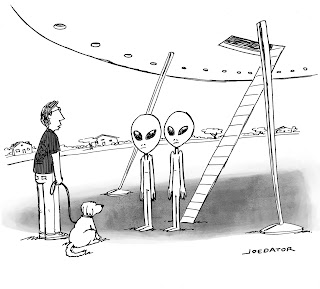 "But that one is holding the poop!"
Adam Tooze, the author of the monumental Crashed (who was, incidentally,  student of Wynne Godley, one of my mentors), wrote a piece for the London Review of Books that has received a lot of praise. While it reviews Paul Krugman's latest book, it provides an overview of the radicalization of New Keynesians, or at least some, that dominate both in academia, and in the corridors or power. The gatekeepers of knowledge and academic  and intellectual influence, with a close connection to power, so to speak. He tells us at the outset that Krugman, the economist that was a bulwark of free trade, even when the theories for which he received his Sveriges Riksbank Prize (aka the Nobel) suggested that some degree of intervention might be good, and that remained even after the 2008 crisis a defender of the conventional macroeconomic model, not only has moved to the left, but also that "in Joe Biden’s Washington, Krugmanism rules."
This is, however, a misinterpretation of the current situation. Tooze suggests that Krugman is one of the "high-powered centrists inching their way towards seemingly obvious political conclusions." The group includes "three centrists – Biden, Janet Yellen and Jerome Powell [that are] undertaking an experiment in economic policy of historic proportions." And he, also, argues that: "what sets Krugman apart within this cohort is the way he has, since the 1990s, stopped being a gatekeeper of the status quo and instead become its critic. In this respect his closest analogue is Joseph Stiglitz, also once of MIT, a member of the Clinton administration and chief economist to the World Bank. Both men have indisputable standing as members of the elite club of New Keynesians."
I see Krugman as being closer to what Colander, Holt and Rosser referred to as the cutting edge of the profession. The role of cutting edge of the profession, in my reply to them (see the paper in Fred Lee and Marc Lavoie's book here), is to make more reasonable policy propositions, while maintaining the notion that markets do produce efficient outcomes, in spite of the unsurmountable logical problems brought by the capital debates, and that led to the rise of vulgar economics. Krugman in that sense is the epitome of the cutting edge. Of course, in order to make reasonable points he would discard many of his own ideas. But he is no critic of the mainstream. The problem with Tooze's argument lies in there. Krugmanism cannot rule, if he basically had to discard his ideas in order to remain relevant. And relevant here simply means that he can be seen to be on the right side of history, more skeptical of free markets, free trade, and willing to accept significant expansion of deficits and debt.
The ideas that won the day and rule in Biden's America are heterodox ideas, that in fact, until very recently Krugman dismissed as not serious. The possibility of continuous expansion of the welfare state, and the expansion of fiscal deficits and debt were anathema to him. Not only he was against expansionary fiscal policy, but even 'Medicare for All,' the signature proposal of Senator Bernie Sanders, something that is common in all advanced economies, was dismissed as a political nonstarter. And certainly that idea, which is not that radical, has remained in the background, and is unlikely to be pushed by the 'radicalized' Biden administration. Perhaps even Krugman still thinks is far too lefty to be acceptable in the United States.
Biden might be the president, and he has a lot of power about what elements of the agenda to push, and he has certainly moved to the left. No doubt about that. Not surprisingly Heather Boushey and Jared Bernstein, economists with heterodox and labor connections, are defending the fiscal expansion from the Council of Economic Advisers (CEA), while Larry Summers, the quintessential insider of the Clinton and Obama administrations, is criticizing from outside. But the Democratic Party has moved to the left, and the politicians have followed. It is the party of Bernie and Alexandria Ocasio-Cortez (AOC). And the establishment knows they need to move if they want to remain relevant, and have a fighting chance in 2024, since the working class is radicalized, and many will abandon the party if Biden does not deliver.
They are like the French politician that, seeing the masses pass in protest, tells his friends in the café he must leave and follow them, since he is their leader. This is, it goes without saying, more like herd behavior, than leadership. Krugman is, in that sense, the leader of an intellectual sea change about views on the role of the state in the economy.
Tooze may think that these arguments are just the diatribes of those in the left that are angry,* infuriated he argues, with the slow pace of change in the center. The issue is that, even though Krugman is following the herd, he certainly is a central gatekeeper in the economics profession. A profession that has been attacked for good reasons, for its excessive influence in policy, and the recurrent blunders of its luminaries. 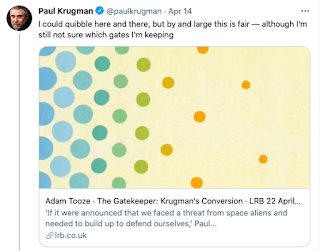 Krugman still argues in terms of the conventional model, that he defends, as having done a good job explaining the 2008 crisis. People like Wynne Godley, that truly foresaw the 2008 crisis, often only received the acknowledgement ex-post, sometimes too late, after passing away.** Krugman dismisses heterodox economists as not serious. A type of red-baiting of heterodox economists with significant impact on the ability of the profession to change. He also validates some of worst within the mainstream and is willing to play by their harsh rules.+ This is, of course, because the prestigious teaching positions he held, and still holds, the 'Nobel', that was created to give respectability to certain ideas, the weekly column in the NYTimes are all powerful platforms. The danger in this, in accepting Krugman's narrative that he has been right all along, is to convince ourselves that the profession has indeed changed. Now the dangers of neoliberalism and their main defenders, mainstream economists, are gone. The profession is rehabilitated. But the retreat of neoliberalism is only temporary. Krugman and other gatekeepers will change their tune when the current Keynesian moment passes. If the Bidenomics experiment ends up being of historic proportions, and I do hope it does, although that is still too soon to tell, it will not be a victory of Krugmanism. It will be a victory in spite of it.
* I am not as angry as Paul Romer, though.
** On Krugman critique of Godley's 'hydraulic' model, and my response go here.
+ He famously said: "By the early 1980s it was already common knowledge among people I hung out with that the only way to get non-crazy macroeconomics published was to wrap sensible assumptions about output and employment in something else, something that involved rational expectations and intertemporal stuff and made the paper respectable. And yes, that was conscious knowledge, which shaped the kinds of papers we wrote." [Italics added] See the quote and a discussion of the role of another gatekeeper in France that also won a 'Nobel' here.
By Matias Vernengo - April 27, 2021 No comments:

Life among the Econ: fifty years on

Almost fifty years ago, the Swedish econographer Axel Leijonhufvud (1973) wrote a seminal study on the Econ tribe titled “Life among the Econ”. This study revisits the Econ and reports on their current state. Life has gotten more complicated since those bygone days. The cult of math modl-ing has spread far and wide, so that even lay Econs practice it. Fifty years ago the Econ used to say “Modl-ing is everything”. Now they say “Modl-ing is the only thing”. The math priesthood has been joined by a priesthood of economagicians. The fundamental social divide between Micro and Macro sub-tribes persists, but it has been diluted by a new doctrine of micro foundations. The Econ remain a fractious and argumentative tribe.
Read paper here.
By Matias Vernengo - April 21, 2021 No comments:


The Global Financial Crisis of 2008 and the COVID pandemic that erupted in 2020 have reinforced criticisms of the main, orthodox current economic theory. At the same time, they highlighted the need for and importance of alternative approaches such as Post-Keynesian Economics (PKE). The Post-Keynesian Economics Society (PKES) is an initiative that fosters research and dissemination within the framework of PKE. Furthermore, PKES is committed to working towards a strengthening and an internationalization of heterodox economics networks. The shift to online events due to the covid crisis provides an occasion for such international collaborations. We have worked with the Italian PK network and want to convene a series of webinars with Argentinean PK scholars, which we hope will lead to the launching of the Argentinean Post-Keynesian Association (APKA).

APKA’s objective is to develop a network between economists and other scholars with similar interests, perspectives and approaches, in order to support and disseminate research linked to PKE. We recognize the diverse heterodox traditions of Argentine and more broadly Latin American schools of economic thought with strong links with PKE. Therefore, the APKA extends the invitation to scholars of other traditions such as Structuralism, evolutionism, classical-Sraffianism, institutionalism, regulation theory, feminist economics and ecological economics.

This spring we are organising a series of webinars that explore that the dynamics of developing countries and what PKE can contribute to that. We will analyse financial dynamics, productive structures and the relation between Latin American structuralists and PKE. Each webinar will have two speakers, one based in Argentina and one based in Europe.

PKE and other heterodox traditions in Latin America