The rise of vulgar economics and the end of dissent

Funny thing, the rise of vulgar economics, which I discussed before (here, here, and here; see also this and this papers for more on the topic) didn't just lead to the ostracism of heterodox approaches to economics. It also led to a significant decrease in the debate within the mainstream. Or at least is what the figure below, from the interesting blog post by Joe Francis, seems to indicate. At some point in the 1960s, more than 20% of the papers in the main journals were a reply, a comment or a rejoinder to the work of someone else. Not anymore. 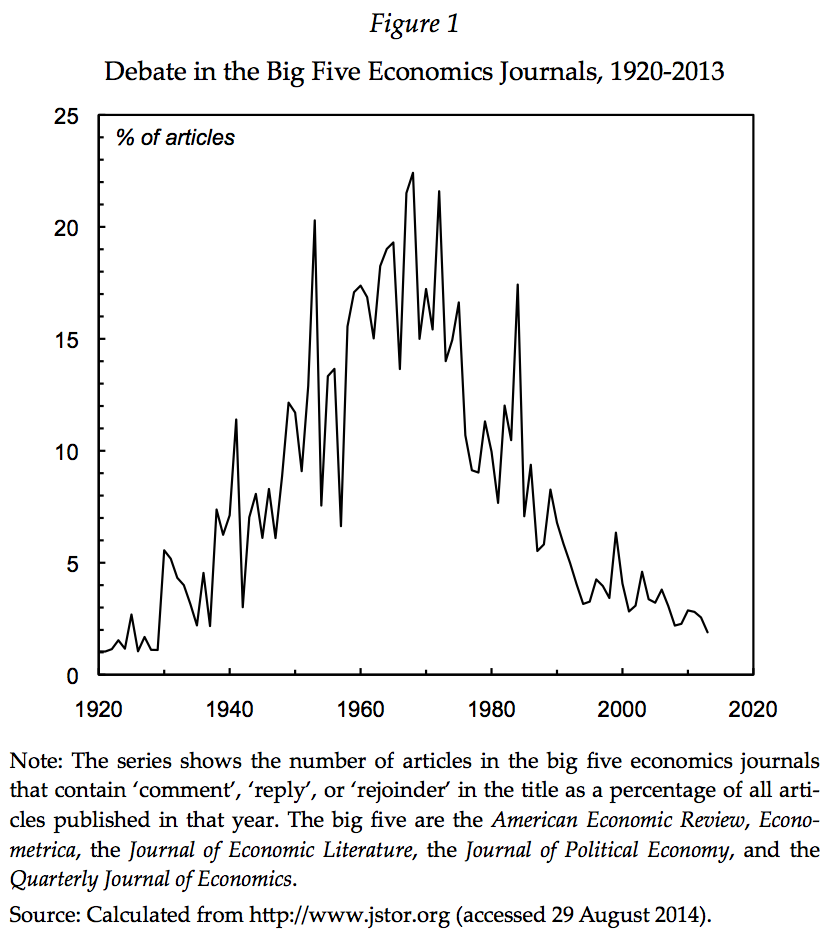 It is clear that the Great Depression and the Keynesian Revolution seemed to increase debate within the mainstream, and that, as Joe says, the: "decline in debate... appears to have been associated with the emergence of a ‘neoliberal’ hegemony from the 1970s onwards." That's essentially correct.

And the decline in debate explains why Lucas could say in the early 1980s that: "at research seminars, people don't take Keynesian theorizing seriously anymore; the audience starts to whisper and giggle to one another." And also why if you wanted to publish you basically had to accept the crazy New Classical models. Krugman admitted to that before, as I've already noticed. He argued that: “the only way to get non-crazy macroeconomics published was to wrap sensible assumptions about output and employment in something else, something that involved rational expectations and intertemporal stuff and made the paper respectable.” You must remember, you don't publish, you don't get tenure. So crazy models became the norm.


Not only heterodox economists were kicked out of mainstream departments, and had to create their own journals in the 1970s, but also the pressure within the mainstream to conform and silence dissent was strong indeed. Note that many, like Blanchard and Woodford for example, in the mainstream continue to suggest that there is a lot of consensus between New Keynesians, and Real Business Cycles types. In fact, they say there is more agreement now than in the 1970s. How is the consensus methodology in macroeconomics, you ask. From Blanchard's paper above:


"To caricature, but only slightly: A macroeconomic article today often follows strict, haiku-like, rules: It starts from a general equilibrium structure, in which individuals maximize the expected present value of utility, firms maximize their value, and markets clear. Then, it introduces a twist, be it an imperfection or the closing of a particular set of markets, and works out the general equilibrium implications. It then performs a numerical simulation, based on calibration, showing that the model performs well. It ends with a welfare assessment."

And yes that is also the basis of New Keynesian models. The haiku basically describes the crazy models in which reasonable results must be disguised if you're to be taken seriously in academia. When everybody agrees, there is little need for debate. And you get stuck with crazy models. The lack of debate within the mainstream to this day is also, in part, what provides support for austerity policies around the globe, even when it is clear that they have failed.
By Matias Vernengo - January 13, 2015