There are Gold Bugs and there are Bitcoin Bugs. They all oppose fiat money (hate the Fed and other monetary authorities) and follow some sort of free banking view loosely based on Austrian views. The supply of bitcoins is strictly exogenous controlled by a complex system that cannot be trampled by greedy central bankers and politicians. Wired said in an article last year that:


"Bitcoin required no faith in the politicians or financiers who had wrecked the economy—just in Nakamoto’s elegant algorithms. Not only did bitcoin’s public ledger seem to protect against fraud, but the predetermined release of the digital currency kept the bitcoin money supply growing at a predictable rate, immune to printing-press-happy central bankers and Weimar Republic-style hyperinflation."

A very monetarist view of inflation, as you can see. The problem is that central banks print too much money, and by the way, in the US hyperinflation is around the corner.

The funny thing is that they had hyperinflation in Bitcoinland (a land of people that use this stuff) last year and they didn't understand it. The graph below shows the exchange rate between bitcoins and dollars from inception to the end of last year more or less. As it can be seen (not very well I'm afraid), prices fell from almost US$30 per bitcoin to around US$3 in two months. 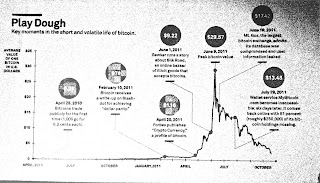 Now think about it. If you bought a "I'm Satoshi Nakamoto" T-shirt (the guy that invented bitcoins, and yes they do sell them) say for US$ 30 in mid-June last year it would cost you approximately B$ 1 (B$ is not a bad symbol for them!). By late October, when the exchange rate depreciated brutally, you would have to pay for the same US$ 30 T-shirt around B$ 10. 10 times more. 1000% inflation in two months looks like hyper to me, even though the supply of bitcoins did not increase nearly as much, since it is controlled by a complex computational algorithm.

This should teach these people that hyperinflation is more complicated than just central banks printing money (see this paper). Still Ron Paul may have some support in Iowa, because of popular misperception about the role of money supply and the causes of inflation. Happy New Year!

PS: In my view Nakamoto is the intelligent version of Madoff. He got away with the dollars and dumped the bitcoins.
By Matias Vernengo - January 01, 2012