Leo Panitch on Obama and Globalization

From the Real News Network:


This Real News segment with Professor Leo Panitch is worth watching for those that miss Obama (perhaps should be seen together with the reading of this piece on Mike Pence, for those that think that he would be much better than the orange one). At any rate, besides the fact that Obama was not even for more than a very moderate reform of the system, and that he still justifies globalization in neoliberal terms, it seems to me that Panitch (and Paul Jay) miss the main reference for Obama's speech (at least concerning the reduction in violence) which seems to be the work of Steven Pinker (his famous book on that was The Better Angels of Our Nature), and probably his new work, Enlightenment Now. And that says a lot about Obama intellectually.

It seems that Obama now embodies the famous phrase by Upton Sinclair according to which: "it is difficult to get a man to understand something, when his salary depends upon his not understanding it." Or his paid Wall Street gigs and fancy vacations with the global jet set.
By Matias Vernengo - July 30, 2018 No comments:

The deepening of economic globalization appears to have ground to a halt and the process may even unravel a little. The sudden stop has surprised economists, whose belief in globalization has strong parallels with Fukuyama’s (1989) flawed end of history hypothesis. The paper presents a simple analytic model that shows how economic globalization has triggered political and geopolitical contradictions. For the system to work, politics within countries and geopolitics across blocs must be supportive of the system. That is missing. The model is applied to a global economic core consisting of the US, China, and the European Union. It is revealing of multiple tensions, fracture lines, and contradictions. Within the US, globalization has delivered economic outcomes that have estranged the electoral bases of both major political parties. It has also delivered outcomes that are inconsistent with the US neocon geopolitical inclination. President Trump is a product of those forces, and he will likely prove to be a historically significant figure. That is because he has surfaced geopolitical contradictions that cannot be swept back under the rug. Ironically, his biggest impact may be on the European Union, particularly Germany, which is being compelled to recognize the neocon nature of the US and the vulnerabilities of dependence on US exports and technology. China was already aware of its vulnerabilities in those regards.

What is the Central Bank of Argentina Actually Doing?

Brief note in Spanish (no translation, sorry) on the long history of central banks and the current policies of the Argentinean central bank (BCRA). The gist of the argument is that while central banks where created to finance developmental states in the nascent merchant capitalist societies, in the periphery they tended to follow the Victorian model (implemented later) emphasizing inflation control as the main official goal. However, often, as in the recent case of the BCRA, they are used to accelerate inflation and fuel speculation, if that allows for lower real wages, which was Macri's administration not so hidden goal (from an old, but revealing interview).
By Matias Vernengo - July 23, 2018 No comments:

IMF Programs: Past and Present 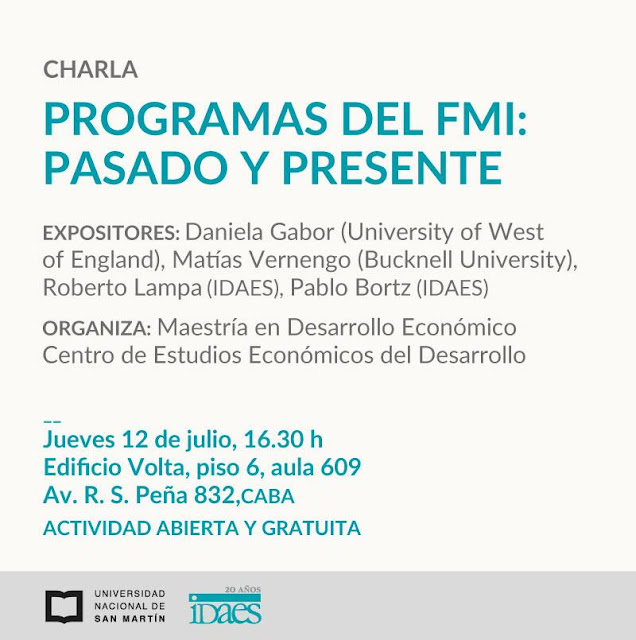 A roundtable with Daniela Gabor, Roberto Lampa and Pablo Bortz, on the IMF and its Programs this Thursday in Buenos Aires, organized by the Masters in Economic Development at the Universidad de San Martín (UNSAM).
By Matias Vernengo - July 10, 2018 No comments:

Email ThisBlogThis!Share to TwitterShare to FacebookShare to Pinterest
Labels: IMF

A crisis gone to waste

My interview with INET from January 2017 at the ASSA meetings in Chicago. From the INET link:

After the Great Depression, global capitalism underwent serious reform. Why didn’t that happen after 2008?

Matias Vernengo, Professor of Economics at Bucknell University, explains how a crisis can reveal that the dominant neoliberal orthodoxy is in fact based on a shaky theoretical foundation. But for new economic thinkers to capitalize on that requires a clearly articulated alternative—one that existed during the Cold War, but is just coming into public discourse now.
By Matias Vernengo - July 07, 2018 No comments:

Classical Political Economy and the Evolution of Central Banks 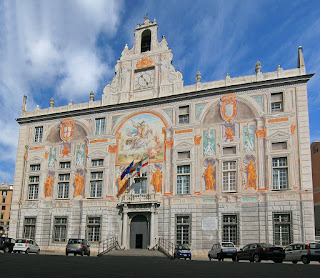 Paper presented twice is now published in the RRPE. It tries to bring the surplus approach tradition ideas to discuss the historical origins and the definition of what a central bank is and should do.


The paper analyzes briefly the changing ideas on the role of money and banks from William Petty to Thomas Tooke, including the works of Adam Smith, David Ricardo, and Karl Marx. It analyzes the role of ideas in shaping the evolution of central bank regulation. Particular importance is given to the Bank of England’s inconvertibility period, from 1797 to 1821, and the ensuing debate in shaping Robert Peel’s Bank Act of 1844, which is often seen as the birth of modern central banking. The importance of the Say’s Law, and the inexistence of an alternative theory of the determination of output, is shown to play an essential role in the policy prescriptions of the so-called Bullionist authors, who won the debates that shaped central banking practices in the nineteenth century. The paper concludes with a brief analysis of what is a central bank according to the dominant (marginalist) mainstream of the profession, and what an alternative conception based on what may be termed classical-Keynesian political economy would be.