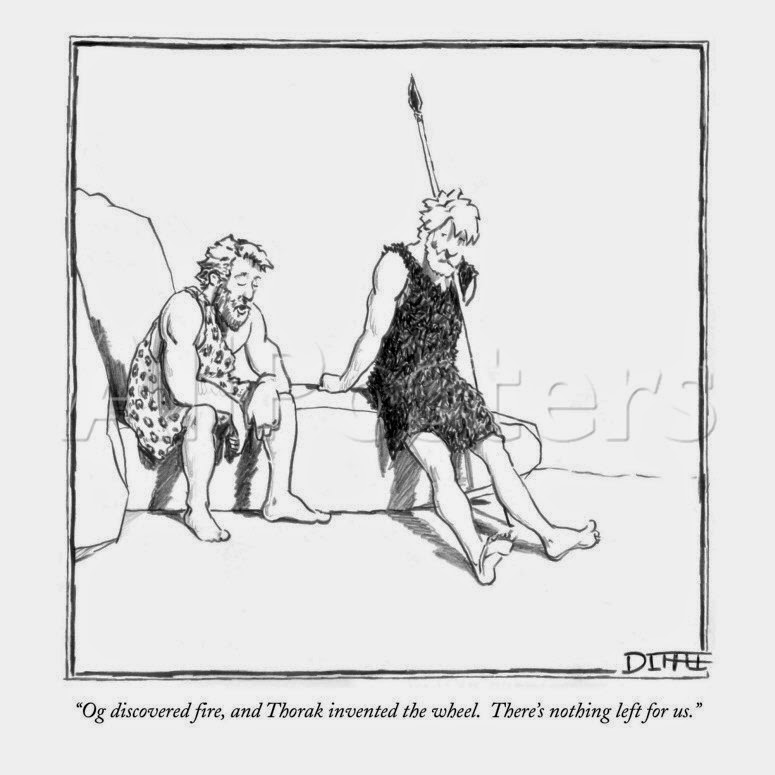 Technological determinism is widespread. The Solow model basically suggests that it is technological progress, measured incorrectly as Total Factor Productivity (TFP), that drives growth. The same is true of Schumpeterian models with a demiurgic role for the innovating entrepreneur.

But technological determinism is not just typical of economics, historians too tend to accept that technology drives history. Leo Marx and Merritt Roe Smith tell us in the intro to their edited book titled Does Technology Drive History? that:


The collective memory of Western culture is well stocked with lore on this theme. The role of the mechanic arts as the initiating agent of change pervades the received popular version of modern history. It is embodied in a series of exemplary episodes, or mini-fables, with a simple yet highly plausible before-and-after narrative structure. Before the fifteenth century, for example, Europeans are said to have known little or nothing about the western hemisphere; after the compass and other navigational instruments became available, however, Columbus and his fellow explorers were able to cross the Atlantic, and the colonization of the New World quickly followed. Newly invented navigational equipment is thus made to seem a necessary precondition, or "cause," of as if it had made possible Europe's colonization of much of the world.

Similarly, the printing press is depicted as a virtual cause of the Reformation. Before it was invented, few people other than the clergy owned copies of the Bible; after Gutenberg, however, many individual communicants were able to gain direct, personal access to the word of God, on which the Reformation thrived. As a final example, take the story, favored by writers of American history textbooks, about the alleged link between the cotton gin and the Civil War. In the late eighteenth century, slavery was becoming unprofitable in the American states; but after Eli Whitney's clever invention, the use of African slaves to harvest cotton became lucrative, the reinvigorated slavery system expanded, and the eventual result was a bloody civil war.

And when it comes to economics technological determinism is not only a trait of the mainstream of the profession. The editors argue that Heilbroner (who was very open, but more conventional in is economics than people think) is the closest in their book's collected essays to accept technological determinism. Heilbroner's classic paper "Do Machines Make History?" starts with Marx's (Karl not Leo) epigraph (from The Poverty of Philosophy) according to which: "the hand-mill gives you society with the feudal lord; the steam-mill, society with the industrial capitalist." Mind you, I think that regarding Marx, the quote might be misleading. Marx clearly thought that there was a technological component to the mode of production, but social relations of production mattered too.

What is NOT discussed in most analyses of the technological determinism by conventional and more than a few heterodox authors is the role of demand in creating the conditions for technological change. In that case, technological change is not the cause of growth, but the result. As in Adam Smith's story, it is the extent of the market (demand) that limits the division of labor (productivity). In modern parlance the idea is known as the Kaldor-Verdoorn Law.*

Obviously there is a certain serendipity in the process of technological innovation, and, hence, it is not uniquely determined by the pressures of a growing market. The point is more that there is no reason for an invention to be pursued systematically if it does not somehow provide for an existing and pressing need. Think of steam engines (the ones that give you the industrial capitalist), which were known for millennia, way before Newcomen and Watt, but had no relevant productive use until they were employed for pumping water out of mines. Only then the potential of the machine was comprehended, and the real work of incremental improvements that made it really useful started.

The question is then one of causality (as it often is between heterodox and mainstream views). Do innovations cause growth or are caused by growth (even if there is some two-way causality the question is which one predominates)? Were the high wages in England that forced capitalists to economize on labor (Principle of Substitution) and led to the Industrial Revolution, as Robert Allen suggests, or did the high wage economy, and the extended domestic markets (let alone the external markets) that provided the stimulus for technological change? I still believe that the weight of the historical evidence suggests that demand rules the roost.

The notion that technology is demand driven is also the only alternative, even though that is not understood very well by historians (economic or otherwise) to technological determinism. In this case, the reasons behind innovations are associated to the more complex social forces that determine the expansion of demand. They involve issues related to income distribution (high or low wages), or the social patterns that determine tastes and consumption (the reasons why the British consumed Indian calicos and porcelain pottery), the access to foreign markets, and the geopolitical forces that explain why some won and others lost in the pursue of those markets, to name a few. Note that power and politics are central to technological innovation, since they involve issues like income distribution and global access to markets. How can you understand the US National Innovation System (NIS)** without the Military-Industrial Complex and its role in providing access to global markets?

Sure enough a demand driven story has space for the sort of external supply-side effects that allow technology and innovations to thrive. So the expansion of demand in a society like England that was going through a Scientific Revolution would have more chances to lead to technological innovation (there is a gap between science and technology, of course) and  provide certain advantages over their competitors for global hegemony, to say the least. In other words, a demand driven story does not imply that supply side factors are irrelevant, they are simply not the prime movers.

* Neo-Schumepterians often refer to this view as the demand-pull hypothesis, due to Jacob Schmookler's Invention and Economic Growth.