Leo Panitch and the Lessons from Socialist Defeats 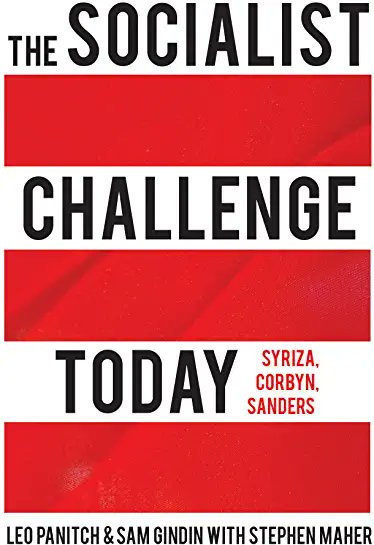 A few weeks ago I bought the little book on top (a new edition of a previously published one, I think). Sadly not long after I learnt of Leo Panitch's untimely death (obit by Chibber here). The book tries to account for three recent defeats of the democratic socialist left in recent times, even though it was written before the ultimate defeat of Bernie Sanders by the establishment candidate earlier this year. He and his co-authors discuss the rise of democratic socialism, and the consequences of the defeat, or one might say the caving, suffered by Syriza, which they point out was "the only party to the left of traditional social democracy in Europe that succeeded in winning a national election"* (p. 29), and what they call "the devastating defeat Corbyn suffered at the hand of Boris Johnson in December 2019" (p. 67).

The main lesson about the Syriza failure, even before the somewhat expected electoral defeat in 2019, was the absence of a Plan B. It could not back it's challenge to the Troika's austerity plans, since there was no plan for exiting the Euro, and they assume that would have led to leaving the European Union too. They say: "There was a marked lack of seriousness, if not dishonesty, behind the tendency to treat the referendum as proving, not just the massive public support for resisting further Troika-imposed draconian austerity (which was the question actually posed) but that the same support would have existed for leaving the eurozone, and most likely the EU, in light of the capital and import controls that this inevitably would have led to." In a sense, the notion is that there was support (from the middle class?) for pushing against the Troika, but not really for leaving the Euro. On Syriza's betrayal of the No Referendum see the old post by Stavros Mavroudeas here.

The lessons in the Corbyn case are less clear to me. They praise the Labour Party's 2019 Manifesto as being "more coherent and progressive [than the 2017 one], especially in making the environmental crisis rather than the need for export competitiveness, the overarching framework for the radical industrial strategy" (pp. 67-68). But they seem concerned fundamentally with how markets would punish a more radical government, and with the absence of "plans to deal with capital flight or a run on the pound" and the silence on "how and when to introduce controls over the movement of capital" (p. 65; although that seems more about the 2017 Manifesto). That notion of the dangers of capital blackmailing left of center governments seems to be part of their general view. They also tell us (p. 82), regarding the Meidner Plan in Sweden to socialize the ownership of the means of production,  that it was "resisted by Palme's Social Democratic government... [because] it had a fatal flaw: why would owners, knowing there is a timetable for their expropriation, continue to invest?"

Of course, a left of center governments could use monetary policy tools to avoid capital flight (including higher rates, and not just controls), and investment depends considerably more on whether the economy is growing or not. But my main problem with the discussion on Corbyn's defeat is their unwillingness to deal with the issue of Brexit and the role it played in his defeat more explicitly. My views on Brexit have not changed much since this post, so I'll avoid getting into it. But it seems clear that, like in the United States, in order to discuss the economic grievances of the working class, the left of center parties must be willing to discuss more directly the problems of economic integration.

Sanders has been doing that, and yet, he lost a second time. The book cannot discuss that, since it was written, it seems, before April and the victory of Biden in the primary. Here the issues of the inability to win, to a great extent because the party machine makes it impossible, opens the discussion of whether fighting inside the Democratic Party is the correct strategy. Like Michael Harrington, I believe that there is little alternative. I'm not sure that's their view in the book. At any rate, they do praise Bernie for having "a class-focused campaign" (p. 71) and spend a good amount of ink (pp. 74-86) criticizing Elizabeth Warren's firm based rather than class-based struggle for democracy (p. 87). It seems that a reform both of the primary system within the Democratic Party and an elimination of the electoral college are needed for a democratic (lower case) society in the US.

If there is a lesson, although it's not expelled out explicitly in the book, is that the forces of neoliberalism are incredibly strong, and resilient. Perhaps, that's a lesson that could have been seen in the several defeats of the left in Latin America with the end of the pink tide a few years ago. In the case of Latin America, lawfare, the use of the media, and the international institutions, and more recently even military force (in the case of Bolivia)+ were central to defeat left of center governments. In the case of Chile, it's worth remembering the role of the Constitution in tying the hands of left of center administrations, and how a referendum was needed to overturn Pinochet's charter. And the book suggests correctly in my view that "democratization can't occur without changing the context within which economic units, and thus workers, relate to each other" (p. 85). At any rate, Panitch always forced us to reflect, and this last book continues to do so.

* Podemos in Spain is part of the government coalition, of course.

+ Although international organizations like the Organization of American States were crucial too, and the coup was eventually defeated by the democratic forces on the left.