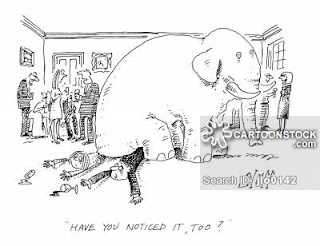 The working class elephant in the room

Upton Sinclair famously said that "it is difficult to get a man to understand something, when his salary depends on his not understanding it." Not understanding the results of this election is what the Democratic establishment is trying very hard to do. Many will continues to say that at the heart of the loss are the misogyny, racism and xenophobia of Trump and his supporters, which is real and problematic, but deny the truth that it was the neoliberal free trade policies pushed by the Clintons and Obama that kept people from going to the pools, in particular in the Rust Belt (see here, but also here, which says essentially the same).

Hillary had slightly more votes than Trump (and yes the electoral college doesn't help, but that's not the problem now), but she had less votes than Romney and about 8 million less votes than Obama in 2008 (when some people thought he was a progressive; btw, there was back then a thing called Economists for Edwards, since many progressives thought, correctly, that Obama was a centrist like the Clintons. He ended up receiving a lot of support because he was the anti-Clinton candidate).

As I noted the other day, the neoliberal wing of the Democratic Party is not dead. Now they are trying to get Howard Dean to substitute Donna Brazile (that passed debate questions during the primaries to Hillary), the interim head of the Democratic National Committee (DNC) (a position she holds because Debbie Wasserman Schultz was forced to resign after being caught blatantly helping Hillary's campaign during the primaries). Bernie wants Keith Ellison instead, since he correctly noted that: “the Democratic Party has to be focused on grass-roots America and not wealthy people attending cocktail parties.”

Of course you will hear a lot about how we need serious people to take over the party in these difficult times, and how we need to collaborate with President Trump, and not be obstructionist, and the idea of electability (how did that work with Hillary?) will be brought back in four years. The emblem of that were the comments from Daron Acemoglu that I quoted the other day: "as long as the Democratic Party shakes off its hard-core anti-market, pro-union stance, there is a huge constituency of well-educated, socially conscious Americans that will join in." That position cost Dems the election, but you should not be surprised that this is taken seriously. This is what the party's establishment is trying to do, since their jobs depend on them not understanding that the Dems need the working class, and they do prefer the nice and educated people in their cocktail parties anyway, rather than the uncouth, and in their view, racist, misogynistic, and xenophobic,* blue collar workers.

* Before some idiot suggest that I'm saying no Trump supporter is racist, misogynistic, and xenophobic, yes there are too many indeed, and his presidency will make things worse. But that's not the reason the election was lost, and many of his voters are NOT those things and DO have legitimate economic grievances. And yes, the majority of the working poor actually voted for her (not enough in the Rust Belt), as I noted in my previous post on the election.
By Matias Vernengo - November 11, 2016