The plutonomy is doing fine

Double posting on the Credit Suisse Global Wealth Report (2015) (other post here). I had discussed the previous issue here. Below the Global Wealth Pyramid. 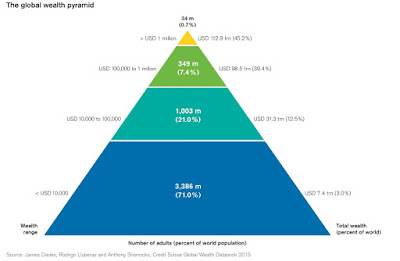 By the way, the US has added more people at the top, while Japan and Europe have lost a few. If you are interested on how many really wealthy people there are (not the 34 million people at the top of the figure above, which are the ones worth more than 1 million), here is what the report says:

UHNW means Ultra-High Net Worth (or what a decade ago Citigroup analysts called the plutonomy). So about 4,500 with a net worth above 500 million dollars.