You can hear the podcast of this interview at Bloomberg's Taking Stock here. You can also read this interview from last year. Graph below is from the latter. 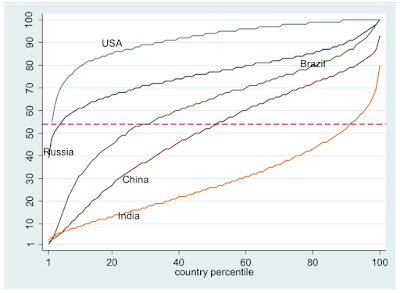 
The graph (for year 2008) shows on the horizontal axis a person’s position in their own country’s income distribution, and on the vertical axis, a person’s position in global income distribution. Thus, the poorest Americans (points 1 or 2 on the horizontal axis have incomes that put them above the 50th percentile worldwide). Note that 12% of the richest Americans belong to the global top 1%.

It's always good to remember that those that suggest that globalization has been good for income inequality are ultimately relying on the fact that fast growth in China and India (among others) in the last two decades or so, has lifted the mean income in these countries, and narrowed the distance with advanced economies, even if income inequality within the countries did not improve. There are other issues with comparisons of income inequality between countries, like what exchange rate should be used, but I'll leave those for another post.
By Matias Vernengo - October 14, 2015