US Interstate Transfers and the Euro Crisis

by Nathaniel Cline and David Fields

It is recognized among heterodox economists that the fiscal crisis some Eurozone countries faced (and are facing) is the result not of internal fiscal excess but of fundamental imbalances made worse by the adoption of a common currency. Indeed, as Wynne Godley pointed out (in several pieces) long ago, European structural payment imbalances will not be automatically corrected by market forces. In this case a common currency without centralized fiscal powers will potentially exacerbate the balance of payments problems of member countries. Some countries will be permanently outsold, and under the current arrangements, are forced to make large income adjustments to resolve their balance of payments.

As a result, many (even in the mainstream) have suggested that a common fiscal union would resolve the problems these countries face. Comparisons have been made to the US whose member states enjoy a common currency with a substantial federal fiscal system that redistributes funds among the states. Residents of states pay taxes to the federal government and states receive government expenditures (through federal programs, grants, salaries, and other means). However the payments states receive are decided upon different ground than the taxes they pay. Thus a state like Mississippi pays very little in taxes, but receives a substantial amount of government spending. In contrast, states like Minnesota pay in to the system much more than they receive.

It is misleading however to assume from these large transfers that simple fiscal transfers between states would resolve Europe's fiscal problems. In a recent presentation to the Eastern Economic Association, Dave Fields and I argued that in fact, the US did not respond to the crisis by transferring large amounts of money between states as it does in normal times.

The key point was that US federal government went into deficit to transfer money to states as a whole. The relevant transfer in the crisis was then not among states, but between states and the federal government. What is needed then is a Euro deficit which would finance all member states, and not necessarily transfers between say Germany and Greece in the middle of a crisis.

The degree of interstate transfers in the US is shown below. Note that between 2004 and 2007 it appears that the federal government is actually a net drag on the states. This is likely not quite correct because the expenditures in the chart do not count expenditures which cannot easily be allocated among states (like for instance federal interest payments). 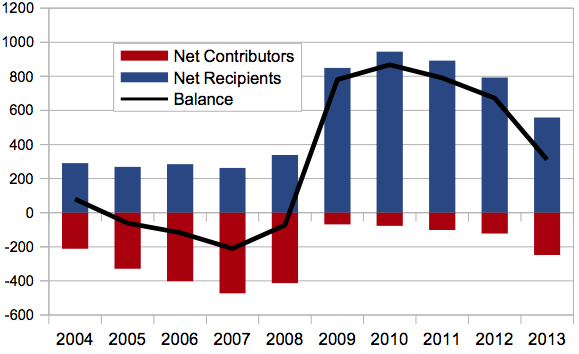 The issue can be seen clearly too if the transfers are broken down by state as is done in the chart below. One can see that by 2009, only a few states remained net contributors to the system while the others all became net recipients (including by the way both California and Texas). 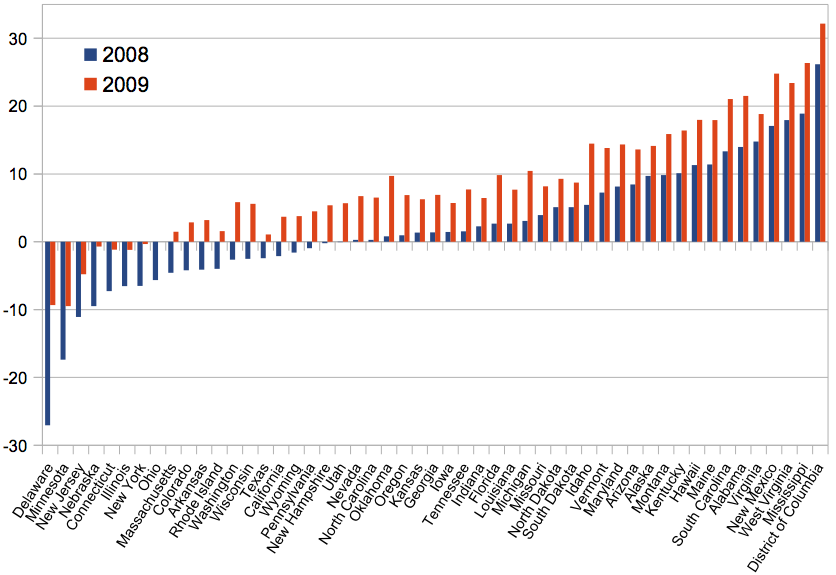