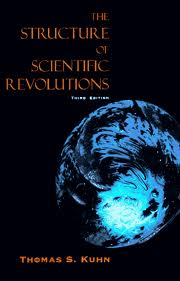 ﻿
The Chronichle of Higher Education has a very good piece on the 50 year anniversary of Thomas Kuhn's classic The Structure of Scientific Revolutions (SSR). It is worth remembering that the official methodology in economics remains Popperian.

The conventional history of ideas in economics, as represented by Schumpeter’s monumental History of Economic Analysis or by Mark Blaug’s work is one that emphasis the continuity and growth of knowledge. Hence, the frontier contains the set of accepted truths and the past is a history of how true knowledge was achieved. Knowledge progresses in a twofold process, first conjectures are made. Conjectures are not the ultimate truth, but are accepted while not proven incorrect. Then, tests are designed to falsify the conjectures. Hence, in Popperian terms theories can never be proven true or verified, but they can be accepted while they are not refuted. In other words, there is rational progress in science, including economics. Falsification is, then, the instrument to measure progress, since it provides the demarcation criteria to define what is and what is not scientific knowledge, and also to determine whether a theory is superior to the other.


Thomas Kuhn provided and alternative to the conventional approach. The evolution of scientific knowledge is tied to history and to the sociology of the scientific community. A paradigm can be described as the set of rules and methods accepted by a scientific community. Scientific knowledge is for the most part the result of normal science, that is, the work of scientists within the confines of their paradigm. However, normal scientists are sometimes confronted with critical anomalies that put in doubt the validity of the whole paradigm (Kuhn’s model of paradigmatic change is the Copernican revolution). An accumulation of anomalies leads eventually to a paradigmatic crisis, and to the emergence of new paradigms.

New paradigms explain the anomalies unexplained by the old one. More importantly, new paradigms often provide a new vision of the object of study. Hence, new paradigms imply that hypotheses are incommensurable in terms of the old paradigm. The methods of testing hypotheses are no longer accepted. Progress is then only possible within the paradigm. Comparisons between paradigms involve the values of the scientific community and the persuasive ability of scientists.

The Kuhnian model was developed to discuss scientific progress in the hard sciences, so a reasonable question is whether it applies to soft sciences too, admitting that economics is a soft science. In economics several paradigms co-exist for long periods, something that should happen only in periods of crisis. Also, the Marginalist Revolution took place even though there was no evident anomaly unexplained by the dominant paradigm (classical political economy; in all fairness Ricardian economics had been abandoned in the 1830s, and vulgar economics dominated the profession). Ideological reasons seem more important in that case. Further, the Keynesian Revolution, that occurred as a result of the high levels of unemployment (an anomaly if there is one for the normal marginalist science) that could not be explained by the dominant paradigm, was to a great extent aborted, and the idea of a natural rate of unemployment was reinstated.

A. W. Coats (1969; subscription required) notes that anomalies and critical experiments are not common, but still the concept of scientific revolutions may serve in economics as an ideal type to clarify the sociological elements in the development of economic ideas. SSR remains vital for economic methodology, in particular after the last crisis has shown, once again, the limitations of the self-adjusting marginalist paradigm.
By Matias Vernengo - April 24, 2012