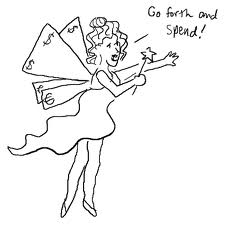 There are confidence fairies and there is the inflation expectations fairy. It's a 4% fairy apparently. I'll explain. So Krugman correctly points out always that the more fundamentalist neoclassical economists (the Talibans that love price flexibility and instantaneous adjustment to full employment, not the moderates that also believe in a natural rate, but think it takes a while to get to it like Krugman himself) believe that the economy would recover if only a proper environment for investment was created. Hence, if confidence returned we would have a recovery.

They obviously invert causality between confidence and recovery. As noted by Marriner Eccles long ago: "confidence itself is not a cause. It is the effect of things already in motion. (...) What passed as a 'lack of confidence' crisis was really nothing more than an investor's recognition of the fact that new plant facilities were not needed at the time." Investment is the result of a growing economy, in which firms tend to adjust their capacity to demand. No demand for your goods no need to invest to create capacity to produce more. Plain and simple.

Now a dispute on what is the appropriate policy for the Fed, and what has been Bernanke's role has developed between Krugman and Bernanke (see here and here) [Ball has a more academic paper saying basically the same as Krugman here]. They argue that Bernanke has been correct in pursuing quantitative easing -- the buying of long term Treasury bonds to keep not just short, but also long term interest low -- and saving banks, but he has been reluctant to increase the inflation target to 4%. Blanchard has said pretty much the same about the need for a higher inflation target (this was hailed as new thinking in macroeconomics; with that criteria when Greenspan disregarded the 6% natural rate of unemployment level, believing it was somewhat lower, he was a radical innovator!). [I’ll leave for another post the question of why are we even talking about an inflation target in the US if the Fed supposedly doesn’t have one].

Krugman notes that Greg Mankiw actually has sent a veiled (or not so veiled threat, as he is the advisor to Romney, which may or may not have something to do with Bernanke’s reappointment in the future), saying that “if Chairman Bernanke ever suggested increasing inflation to, say, 4 percent, he would quickly return to being Professor Bernanke” (originally published here, yep Mankiw also writes regularly for the NYTimes).

So what is the mechanism according to Krugman (and the ‘progressives’ like the IMF chief economist Blanchard) by which a higher inflation target would lead to a recovery? In Krugman’s own words:


"If the Fed were to raise its target for inflation — and if investors believed in the new target — expected inflation over the medium term, say the next 10 years, would be higher. … [and] higher expected inflation would aid an economy up against the zero lower bound, because it would help persuade investors and businesses alike that sitting on cash is a bad idea. "

So if the Fed says it’s willing to accept a higher level of inflation – without doing anything concrete and objective like intervening and forcing banks to refinance the mortgages of people in foreclosure – then if investors are persuaded they may be confident enough to spend more. And that’s not a fairy?! The problem with any theory, including the New Keynesian, that believes [or says it does in order to get published] that there is a tendency to full employment, is that it must end on some sort of confidence for spending story, since under normal conditions the system would actually do it anyways. The confidence fairy is dead; long live the inflation expectations fairy!
By Matias Vernengo - April 26, 2012