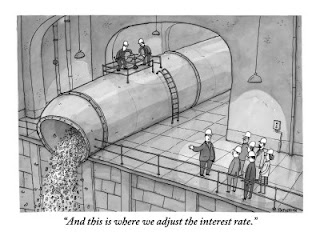 Christina Romer wrote this Sunday about the necessity for the Fed to target nominal output. The implication seems to be that so far the Fed had been targeting inflation, which is obviously incorrect. That would be the ECB. Krugman (here) for some reason liked it. By the way the idea is not new, Samuel Brittan had argued for that not long ago (here), and as noted by David Beckworth so have two other prominent FT columnists (Clive Crook and Martin Wolf).

First of all, Romer calls this a Volcker moment, which is from a historical point of view (and she is a macroeconomic historian) preposterous. Volcker is the guy that tried to use nominal monetary targets, as in Milton Friedman's monetary growth rule (now he is much better and is against de-regulation and too big too fail among other things).

Further, it's not clear how a nominal GDP target would be different from what the Fed is already doing, namely acting as a lender of last resort, and keeping interest rates (short and long, the latter through QE) low. Worse, her argument smells to the confidence fairy stuff you hear from the crazies serious people, and that correctly Krugman deplores. She says:


"By pledging to do whatever it takes to return nominal G.D.P. to its pre-crisis trajectory, the Fed could improve confidence and expectations of future growth."

Sure as objective targets come, nominal GDP is better than inflation,  but since the Fed does not target inflation what is she fighting? Ben Bernanke is fine, Super Mario (Mario Draghi), the new president of the ECB needs whatever is the reverse of a Volcker moment. The US (and Europe) need more fiscal expansion.
By Matias Vernengo - November 01, 2011

New paper by Thomas Palley. From the abstract: This paper explores the economics and political economy of financialization using Matt Taibbi...