Handbook of the History of Money and Currency 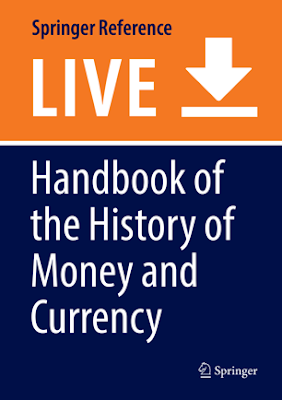 The Handbook (subscription required) has been edited by Stefano Battilossi, Youssef Cassis and Kazuhiko Yago. It has many interesting chapters. Barry Eichengreen writes on what determines that a currency is used as an international currency (or even as the predominant currency). While he follows conventional views in suggesting that role of money as a means of exchange and the importance of the country in international transactions, he does also explore the role of power (military power) behind the key currency. My take on that topic in this paper with David Fields here.

There is also a very readable paper on the history of central banks by Stefano Ugolini here. It follows the evolutionary approach of Roberds and Velde, and in my view also suffers from conventional views on monetary theory that emphasize the exchange role of currencies, rather than the unit of account function. As a result, it downplays the role of fiscal agent of the state, that in my view was key in the early experiences with public banks. I would emphasize the importance of the development of public debt for the subsequent evolution of public banks, and the relevance of early central banks in the management of the Fiscal-Military State. On this see this and this.

There are interesting papers on paper money experiences, by François Velde (here) or on deflation, by  Richard Burdekin (here), to cite a couple.  There is, also, our entry (with Esteban Pérez) on the history of Central Banking in Latin America (here).
By Matias Vernengo - June 21, 2019