On the crisis in Venezuela

I wrote a few entries over the last few years that might be useful to understand what is going on in Venezuela. This one from 2016, tries to explain how the crisis is related to an old problem, the dependence on oil exports and the balance of payments constraint. Venezuela can't manage to get beyond the oil dependence in the boom, since a sort of Dutch Disease sets in. One can certainly blame the Chavista governments for not breaking with that dependence, but in all fairness conservative governments also were unable to do it. In the period of a fall in international oil prices a crisis normally occurs (this one is probably already worse than the Caracazo).

Here for context the data on exports (note that about 90 percent of exports are basically oil, and those go mostly to the US that has refineries that specialize in the Venezuelan oil). 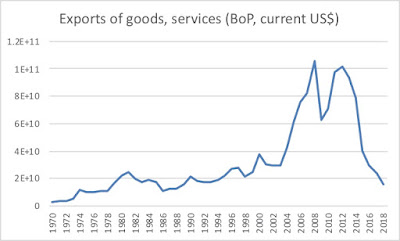 The numbers are from the World Bank Development Indicators up to 2016, and then I use the IMF estimates of growth (actually decline) from the World Economic Outlook database. So this is a brutal collapse, something the US government is doing, even at the price of some costs to local refineries, in order to promote regime change in Venezuela. Whatever your views on Maduro and the Chávez period, note that the US is fine with Saudi Arabia. Trump and Dems before too. And remember that Obama tightened the embargo as one of his last measures. Double standards are incredible, and difficult to defend.

Mind you with the collapse of exports and the fiscal capacity of the state, the economy collapsed too, and so did imports. The embargo makes imports of almost everything impossible and heightens the humanitarian crisis, and the refugee problem. It is somewhat hypocritical, to say the least, to complain about the humanitarian crisis and not acknowledging the US role and the embargo in causing it.

Note also, that in the absence of dollars, not only imports collapse, but payments on foreign denominated debt too. Hence, the close possibility of a complete financial meltdown. Not only default will take place, but scarcity of almost anything imported (including food essentials) and the rapid depreciation of the currency would lead to hyperinflation. If you want to understand external crisis in general read this entry, and for hyperinflation go to this one.

On the complex issues of democracy in Venezuela read this entry from 2017, and this one from 2018. For those that think that the current coup, or any coup including a military one would reduce violence (the opposite is more likely to happen) read this.
By Matias Vernengo - January 25, 2019