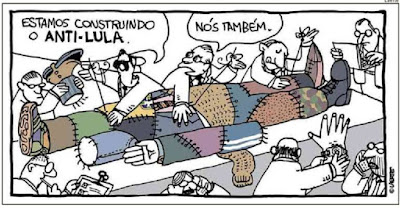 In October 2002, Luiz Inácio Lula da Silva won Brazil’s presidential election and famously argued that hope had defeated fear. In fact, to preempt the fears of local and international finance elites, which threatened capital flight if the Workers’ Party (PT) candidate won, Lula had already signed the infamous “Letter to the Brazilian People” in which he pledged to follow relatively orthodox economic policies. Predictions about his government, and the global economy in general, were not particularly optimistic; fear was greater than hope in many quarters.

Sixteen years later, Lula—the leading candidate in Brazil’s October 2018 presidential election—has been convicted on corruption charges and could be jailed as soon as April 4, officially disqualifying him from the race. If so, we are likely to hear that the initial reasons for fearing Lula were wellfounded. Certainly the mainstream media will portray his imprisonment in that fashion, and Lula’s army of detractors is more than eager to wage attacks on him. In recent months, his campaign has been met with protests, and on March 26, two bullets struck his campaign caravan in southern Brazil. If Lula’s imprisonment plays out as is likely, Brazil will institutionalize a vast system of patronage and abuses the bureaucratic machine for personal gain via illegal payments and bribes, controlled by a right-wing cartel.