The Strange Death of Progressive Brazil 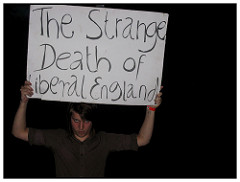 I've been off for a few days for Thanksgiving, as you might have noticed. I visited Argentina, and will have something to say about the situation there in a few days. Here is something I was thinking about what is going on in Brazil, that seems to be in a never ending economic and political crisis. I find the situation particularly concerning for the future of the left in the region.

There is a very nice little book about The Strange Death of Liberal England, (oddly enough, it's also the name of a band) written in the 1930s, when Labour took over as the main opponent of the Tories in parliament, and the Liberal Party of Gladstone, Asquith, Lloyd George and Maynard Keynes became irrelevant and vanished. The book, if memory doesn't fail me (I read it many years ago, when I found a used copy in bookstore in New York; I remember Godley telling me he read it around the time it was published), shows how the divisions on the Irish question and the Gold Standard, together with the rise of a more militant labor force, and new social movements overwhelmed the liberal establishment.

Something similar is happening in Brazil, but in this case, I suspect, the vindictiveness of the right is particularly important to understand the demise of the Workers' Party, that had significant losses in the last municipal elections, including, perhaps more importantly, in São Paulo and in the periphery of that city, where the party was born. One way of looking at the demise of the Workers' Party is to emphasize that it was associated to the corruption scandals of the last few years, in particular those connected to the Operation Car-Wash (Lava Jato in Portuguese) and related to the state controlled oil company Petrobras, as for example the WSJ suggests in the link above.

However, as I noted before, there is little evidence that corruption increased during the Workers' Party 13 years in power. Corruption, as I said then, has a long standing tradition, and is structural, associated to the way the country is managed. By the way, the specific problems with construction contractors, and the state oil company, exactly because they go back all the way to the the 1950s, and in particular, the military dictatorship, indicate that corruption is probably orthogonal to the process of economic development, since up to the early 1980s, Brazil was among the fastest growing countries in the world, up there with Japan and South Korea (nope China and India were laggards back then).

The more recent literature on corruption coming from the Word Bank, tends to suggest that corruption is inimical to growth. However, an older literature tended to suggest, in contrast, that corruption greased the wheels of business and helped promote growth. Samuel Huntington famously argued that: "In terms of economic growth, the only thing worse than a society with a rigid, over-centralized, dishonest bureaucracy is one with a rigid, over-centralized and honest bureaucracy." And no, I'm not in favor of corruption. My point is that you probably don't have a simple linear relationship between corruption and growth.

Besides, as I've also noted before, most measures of corruption are not objective, that is they do not measure the quantitative effects of corruption (money embezzled, etc.), but simply the perceptions. Perceptions of corruption, maybe or not correlated to actual corruption, of course. And one should note that there is always the nagging question of causality. That is, corruption might be the result of lack of development, rather than its cause.

The corruption argument, in spite of its prevalence in the international media, does not explain the collapse of the Workers' Party.* On the other hand, it seems far more reasonable to believe that a combination of right wing resentment, prevalent in the middle class, related to the expansion of social programs, with the acceptance within the party of several elements of the neoliberal discourse, which undermined its support within its base, are at the core of its current problems.

Protests in 2013 started on the basis of legitimate problems related to the cost of public transportation, led by the Free Fare Movement (Movimento Passe Livre in Portuguese). But the protests rapidly broadened the scope of complaints and right wing groups that were against the Workers' Party became more prominent. Note, however, that in spite of the massive protests and the complaints about economic problems, and about corruption, Dilma Rousseff won the elections in 2014, promising to expand the social welfare programs of the Workers' Party. The real problem for the Workers' Party was the post-election volta face, when Dilma appointed Joaquim Levy, a neoliberal economist from Bradesco, one of the largest banks, to the finance ministry, with a plan to promote fiscal adjustment.

Long term persistence of fiscal conservatism was a hall mark of the Workers' Party ideology, briefly lifted during the 2009 crisis with the Plan for Growth Acceleration (PAC in Portuguese). But these views were entrenched, and the experts with anti-austerity, Keynesian (Lernerian to be more precise) views were often marginal. Don't get me wrong, after the initial austerity and the pledge to follow responsible policies (the infamous letter to the Brazilian people), they expanded social spending, and that certainly played a role in economic growth and the increase in tax revenue (hence, the fiscal balances didn't deteriorate), and more so after PAC with increasing public investment. But the ideological notion that fiscal deficits are problematic remained central within the party, and not surprisingly Dilma's economic team accepted the verdict that adjustment was necessary.

The huge recession caused by the austerity policies led to collapse of the economy, which could be and was used to claim incompetence and invent reasons for the impeachment (essentially the criminalization of relatively innocuous and routine policies, the delay in payments to public banks, the so-called 'pedaladas').** Worse, some of the ideas that were discussed during the fiscal adjustment in 2015, like a limit to government spending, are now being implemented. The Constitutional Amendment Project 241/55 (PEC in Portuguese) imposes a limit, for 20 years, on real spending, that is, corrected by inflation. The rule solves a problem that does not exist, that is, it presupposes that the 1988 constitution gave too much in terms of social benefits, that this led to a runaway increase in government spending, that caused both the recent inflation and the lack of growth.*** At any rate, these rules are created essentially to stop progressive policies in the future.

So a combination of the mistakes of the Workers' Party**** and the revanchist rancor of right wing opposition, with significant support in the middle class, explains the incredible collapse of the Workers' Party. Their (they who, you ask; the opposition consolidated in power through the mediatic-juridical coup) work is not over yet, and the question is whether the judges and prosecutors associated with the Car Wash Operation will decide to jail Lula -- on the basis of information obtained from plea bargains with self-confessed criminals, but without any material proof of guilt, at least so far -- in order to preclude his possible return as a candidate. The abuses of the judiciary system are by now well documented, not just regarding the jailing of accused people with no formal ruling (it seems that you are guilty until proved innocent now) and the use of the media to humiliate them, but also the fact that they explicitly target the Workers' Party with no investigation of Social Democrats (yep in Brazil the right wingers call themselves social democrats), which have been caught also in the same types of accusations.

There are many implications of the current events in Brazil. The corruption scandal has not only precluded any kind of serious discussion about public investment, since the modus operandi of government procurement rules in Brazil required several of these practices that are under scrutiny, but it led to a consolidation of a consensus view that fiscal deficits are by definition the instruments of corruption. Further, the crisis has almost certainly destroyed the possibility of using Petrobras as an instrument of industrial policy, to buy specialized equipment and so on (my guess is that right wing groups will at least try to privatize it). Note that in the United States corruption is as endemic as in Brazil, even if in many cases it is sanctioned by law (that is, it is not illegal, even if it is morally unacceptable). And also the US keeps its ability to do industrial policy through the defense budget.

The electoral chances of the left in Brazil are incredibly diminished. I'm skeptical both about the possibilities of Lula, if he escapes the inquisitorial witch hunt, and more so about the possibilities of the splinter from the Workers' Party, the Party of Socialism and Liberty (PSOL in Portuguese), which looks very much like PT 30 years ago. With no channel for the use of the public machine to promote demand growth or to promote technological upgrading through some sort of industrial policy, even in the hands of a right wing conservative government, the future prospects for the country are grim. Without a left of center party capable of winning the elections and using the state apparatus to promote a modicum of welfare redistribution, by increasing social spending and the minimum wage as the Workers' Party did, Brazil seems condemned to maintain its long history of social inequality. And this does not bode well for the rest of the left in Latin America.

* Note also that while there is no evidence of direct involvement of Dilma Rousseff in any of the corrupt deals in Petrobras, congress or any other place, that is not true about her vice-president now in power.

** Something similar is taking place in Argentina, the criminalization of the decision about the exchange rate by the central bank. More on that when I post about Argentina.

** Of course recent inflation has no relation to excessive fiscal expansion. In the last couple of years it went hand in hand with a recession and fiscal contraction. The behavior of wages and the exchange rate is considerably more important. And if the recession caused by fiscal contraction has not convinced you about the fallacy of "expansionary contractions" (I assume you don't cade for evidence) nothing will.

**** On this one should also add that the Workers' Party members always complained about corruption, as a moral issue, and suggested that their government was going to be different. A huge mistake, since the problems with corruption, that should be combated don't get me wrong, are structural. That is, they are intrinsic to the way the country is governed, and it was obvious that a Workers' Party administration would not be immune to it, and would need to have mechanisms to deal with it and try to reduce it.
By Matias Vernengo - December 02, 2016