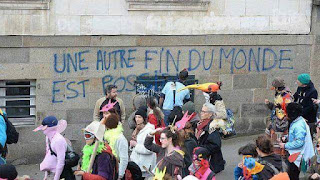 Another end of the world is possible

There will be a lot of postmortems for the European Union (EU) after Brexit. Many will suggest that this was a victory against the neoliberal policies of the European Union. See, for example, the first three paragraphs of Paul Mason's column here. And it is true, large contingents of working class people, that have suffered with 'free-market' economics, voted for leaving the union. The union, rightly or wrongly, has been seen as undemocratic and responsible for the economics woes of Europe.

The problem is that while it is true that the EU leaders have been part of the problem and have pursued the neoliberal policies within the framework of the union, sometimes with treaties like the Fiscal Compact, it is far from clear that Brexit and the possible demise of the union, if the fever spreads to France, Germany and other countries with their populations demanding their own referenda, will lead to the abandonment of neoliberal policies. Austerity will most likely continue. On this matter, note that the United Kingdom did not ratify the Fiscal Compact, and austerity is a completely home made policy, consolidated by the current Conservative government, but also by the previous Blairite New Labor. And Socialist governments in France (you can say the same of Syriza in Greece) have also accepted austerity as the only alternative.

Most of the austerity policies imposed on the peripheral countries are actually the result of the euro, and are to a great extent independent of the existence of a broader political union. Of course the mechanisms for imposing austerity pass through the institutions of the union, but it is clear that progressive policies can be pursued within the union.

In order to understand the limitations of the European project it is important to remember that the original project, associated to the Treaty of Rome built on the European Coal and Steel community, was a policy that aimed at resolving the perennial Franco-German conflict, with the cooperation of the US, in the context of the Cold War. The project went hand in hand with Keynesian policies at home, and the development of the modern Welfare State, possible in part as a result of the Marshall Plan. On the other hand, the modern union is often confused and seen as being inextricably associated with the euro, which was designed after the Conservative resurgence in the 1980s, and consolidated in the 1990s after the collapse of the Soviet block. That is, the euro was created in the neoliberal Thatcherite world in which supposedly 'there is no alternative.' The context has not changed much, even if there is a revolt against neoliberal policies.

And that is why separating the euro project (the case of Grexit would be based on that) from Brexit is important. This is hardly the demise of neoliberal policies. Even the end of the European Union would not guarantee that pro-worker coalitions would win elections, or that if elected they would purse Keynesian expansionary policies (btw, it is also unclear that Grexit would solve all the problems in Greece, and that a default would be successful, although I do think the case is stronger there).

Globally, in fact, there is no evidence that neoliberalism is retreating. In Latin America, the opposite seems to be the case. In the US the same working class anger with neoliberal policies, austerity and stagnation has led to both Bernie Sanders and Donald Trump's insurgent campaigns, but we may end up with the same old neoliberal policies as always (yeah, I mean Hillary Clinton; and no Bernie and Donald are not the same, but that's another issue, and I would vote for Hillary). Even worse, some elements of the revolt of the masses in the US have led to a wave of anti-immigrant sentiment and outright xenophobia, not unlike the UK. And that is something that Nigel Farage and Boris Johnson have exploited in the UK. And remember that Jeremy Corbyn was for Remain, and that he may also suffer with Brexit, and with that the insurgence against neoliberal Blairism within Labor.

Personally, I cannot see that the disintegration of Europe would lead to a positive outcome. Sure the EU has a significant democratic deficit, and a bureaucracy that is seen as wasteful and inefficient (that is always, btw, part of the right wing propaganda for smaller government; you know, because private corporations are always so efficient and democratic, aren't they?). The same is true of American democracy. Ask the Bernie supporters re-counting votes in California (or Al Gore for that matter). So maybe secession should be the solution (yeah, in the US it's the right wing crazy lunatic fringe in Texas that thinks that this is a good idea). And yes, the right wingers in Europe are rejoicing (Trump too).

At a minimum the European Union provided an environment in which people could move freely, in which petty nationalism gave way to acceptance of foreigners and immigrants, something particularly relevant with the refugee crisis in the neighboring region. Some may suggest that this was very little to show for. And the alternative, does it have something to show for? If the European Union really collapses, there will be very little for progressives to be happy about.
By Matias Vernengo - June 24, 2016