Brazilian coup and US misinformation 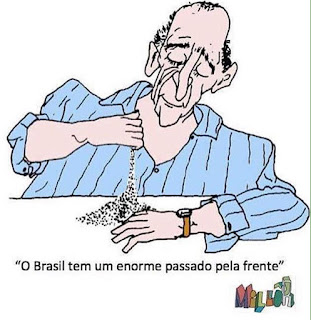 Brazil has an enormous past ahead

As I suggested last month the coup had succeeded. Today Dilma Rousseff was effectively removed from the presidency. No real news here. I just want to correct, to some extent, the huge misinformation campaign in course in the US.  Monica de Bolle was saying many incorrect things on NPR this week (for example, that "the origins of the program called Bolsa Familia came from actually Cardoso's government, so the previous government, the PSDB government that came before the Worker's Party government," when it actually came ideas from Betinho and Cristovam Buarque from the Workers' Party's, PT in Portuguese, government in Brasilia; note that the lie is that she seems to indicate they like spending on the poor, but will have to cut social programs because the new government must be fiscally responsible), which is not a surprise.*

Today the New York Times pitched in also spreading incorrect news. The Times suggests that Rousseff "is charged with violating budgetary laws in order to conceal a deficit before what she anticipated would be a tough 2014 re-election campaign, borrowing money from banks that the executive branch controls to fund domestic programs, and making changes to the federal budget without congressional approval." Actually, the impeachment is based on delays on payments to public banks in 2015, not 2014, and, hence, not related to the re-election campaign. And the primary balance was changed and approved by congress. But the mistakes are all over the place (listen to this on Bloomberg radio; yeah things are going to be wonderful because markets are confident).

The worst part of all of these, and there are many things, not the least the collapse of the economy and the brutal increase in unemployment, is the criminalization of fiscal policy. Note that the Workers' Party maintained primary surpluses for almost all of its period in power. For the most part because a growing economy implies higher revenue. It should be noted that people on the left, like yours truly, always complained of the difference between the primary surplus (red line) and the nominal deficit (blue line), averaging 6% of GDP. The gap corresponds to interest payments that go mainly to the wealthy (see the book on the side for more on that). 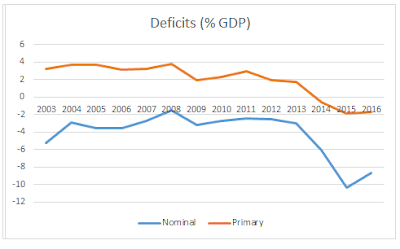 It is only with the crisis itself that the fiscal accounts worsened, and that went hand in hand with austerity policies. Actually more primary spending, and less financial spending, would have accelerated growth and revenue without creating any fiscal problem. And yes net debt went up, but remains below the initial level (see below). And more importantly the debt is in domestic currency. Foreign debt and the current account are not really problems, since Brazil has a pile of international reserves and has access to international capital markets that maintain (and will continue to do so) low interest rates. 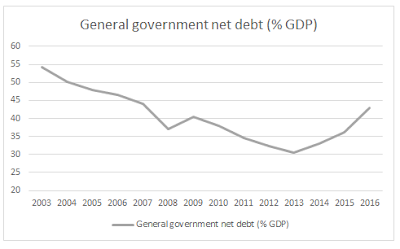 There is no fiscal problem. There is, however, a backlash among the middle and upper classes against social programs, and the greater visibility of the poor in places that were reserved to the elites (airports, malls, universities, etc.) and a discomfort with the stronger rights for workers (for example maids; if you didn't see the movie The Second Mother you should, it would give you an idea of the social tensions in the country). This is a testament of how much the social hierarchy has been challenged, even by a relatively moderate left of center government. Don't be fooled, it is a coup, and as coups usually do it will turn on its enemies. They will try to jail Lula, not just to wreck his legacy, but more importantly because he seems still to be among the few viable politicians in the country.

*  PSDB stands for Brazilian Social Democracy Party in Portuguese (which in Brazilian politics is really conservative, not social democratic at all).
By Matias Vernengo - May 12, 2016