So besides the coup in Brazil (which was all but confirmed by the last revelations, if you had any doubts), and the electoral victory of Macri in Argentina, the crisis in Venezuela is reaching a critical level, and it would not be surprising if the Maduro administration is recalled, even though right now the referendum is not scheduled yet.

The economy in Venezuela has collapsed (GDP has fallen by about 14% or so in the last two years), inflation has accelerated (to three digit levels; 450% or so according to the IMF), there are shortages of essential goods, recurrent energy blackouts, and all of these aggravated by persistent violence. Contrary to what the press suggests, these events are not new or specific to left of center governments. Similar events occurred in the late 1980s, in the infamous Caracazo, when the fall in oil prices caused an external crisis, inflation, and food shortages, which eventually, after the announcement of a neoliberal economic package that included the increase in the cost of transportation, led to public protests and government repression.

These are the problems of an economy that is excessively dependent on oil exports, and that has been unable to diversify its economic activity. Sometimes this is seen as the result of a Dutch Disease (or the Resource Curse), the deindustrialization associated to the changes in relative prices related to favorable terms of trade, which lead to an inflow of imports of manufactured goods and deindustrialization. I would be reluctant, however, to suggest that this is the case in Venezuela, since Import Substitution Industrialization (ISI) was weak there when compared to say Argentina, Brazil or Mexico, and the industrialization process was never strong in Venezuela. 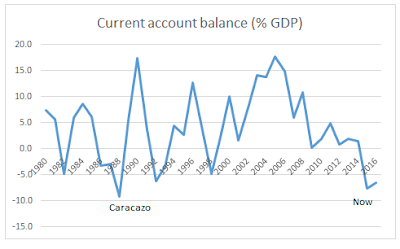 In both cases, back during the Caracazo and now, the current account deficit has been at the center of all problems (see figure above). And while one can blame the left of center governments of Chávez and Maduro for not being able to break the structural dependence on oil, it is hardly the case that this is a problem just of the left of center governments. In fact, even with this terrible collapse of the economy, for the period as a whole starting in 1999 (or 2003, after the Chávez administration survived the US sponsored coup, and took over the oil company), the economy grew considerably (see figure below). 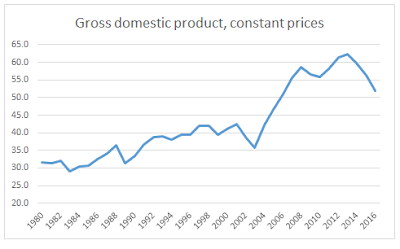 So growth has been tied to terms of trade and the price of oil. Also, not only the economy collapses when the price of oil collapses, but exchange rate depreciation, in the black market now, leads to high inflation, which goes often with shortages. Anybody that has lived through high inflation in Latin America in the 1980s knows this. It has nothing to do with fiscal policy, or with the central bank printing money. The fiscal situation worsened as a result of lack of growth and the external problems (see figure below). 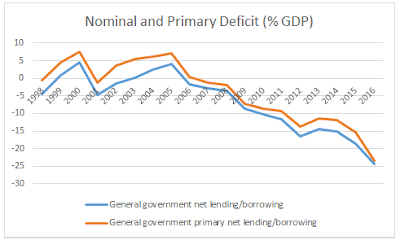 This is a tragedy, and there are no good solutions. Mark Weisbrot suggests depreciating the exchange rate. But normally this operates by making imported goods more expensive, and leading a recession and lower imports. As he notes, the recession has already done a good chunk of that job, and imports have already collapsed. And Venezuela cannot expect much external help, certainly not from the IMF and the US, not while Maduro is in power. My guess is that there is a good chance that the government of Maduro will not resist and that a right wing government will come to power and adopt a neoliberal program. This would bring almost no relief in the short run, even though access to IMF funds might mitigate the balance of payments for a while, and allow to reduce the worst elements of the crisis, like the food shortages.

I should note also, that while it is not surprising that Maduro's government is unpopular in the middle of this crisis (like Dilma was in Brazil), it would be a stretch to suggest that most people want a return of neoliberal policies (in fact, in Brazil the country remains divided, as much as in Argentina, were the neoliberal Macri only won a narrow victory by deceiving the electorate). The problems of the long cycle of the left in the region, tied to the high prices of commodities, and the reduced popularity of left of center politicians, does not translate into an acceptance of neoliberal policies, and more popular resistance can be expected now, as compared to the 1990s, when the Washington Consensus policies were adopted.
By Matias Vernengo - May 26, 2016