Greece on the verge 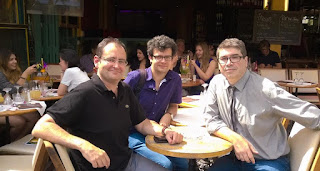 I'm in France for a talk at the Université de Paris XIII, invited by Jonathan Marie and Dany Lang. The Greek crisis looms large in everybody's minds. I gave a talk based on two papers, one published here, and the other (specifically on the Spanish crisis) just finished, which will soon come as a working paper. But I discussed to a great extent the debate between Sergio Cesaratto and Marc Lavoie on the nature of the European crisis, that is, whether it is a balance of payments crisis or a monetary sovereignty one.

Cesaratto argues that a balance-of-payment crisis is possible in a currency union, and that the financial crisis of the Eurozone is indeed such a balance-of-payment crisis. Arguably Pérez and Vernengo (2012; the one linked above) suggest the same, even though the paper was written to argue that the crisis was not fiscal, as per the mainstream hypothesis, and the actual policies pursued by the Troika, which require fiscal adjustment as a solution (presumably because the problem was fiscal).

In the balance of payments or Cesaratto hypothesis, the problem would be that there are no federal transfer payments from the surplus to the deficit countries to help compensate the negative impact of CA deficits on GDP and budget balances. Or to make it more correct, it would be that there are no fiscal transfers from a federal government to the federated units, as has been shown is the case by Nate Cline and David Fields here for the US case.

Yet, as noted by Lavoie, the Eurozone crisis seems to have been mainly caused instead by a banking problem, which transformed itself into a public debt problem. In other words, the currency issue, and the functioning of the monetary union seem to be at the core of the crisis, not a balance of payments one. The monetary union clearly eliminates exchange rate risk, but not country risk, which might explain the interest rate differentials between euro countries. So some countries remain more vulnerable than others.

Marc suggests that the interbank payments system, the so-called TARGET2 (Trans-European Automated Real-time Gross Settlement Express Transfer System), used by the European Central Bank (ECB) can be seen as being at the heart of the problem. In his example, if a Spanish firm imports cars from a German firm, the ECB credits the German firm in a German bank and debits the Spanish one in his correspondent bank. There is no limit to the debit position that the Banco de España, the Spanish central bank, can incur at the ECB. The overdraft capacity of the ECB is unlimited.* So in this view the solution would be for the ECB to use its overdraft capacity to create the conditions for the euro periphery to continue to function without austerity.

Alternatively, this could be solved if the ECB bought bonds from the member countries. However, the rules of the euro imply that the ECB cannot purchase sovereign debt, and, hence, the mechanism by which a risk free asset is normally created is precluded to function. The creation of the risk free asset is the essential function of the central bank in relation to financial stability. According to Lavoie the Eurozone setup should have incorporated a central bank that holds and purchases large amounts of securities issued by the participating national governments. Something that was done in the US by the Fed after the crisis.

My argument, discussed briefly here before, is that the Cesaratto and Lavoie hypotheses are one and the same. The balance of payments and the monetary sovereignty views of the European crisis are two sides of the same coin. The fact that overdraft facilities involved in the TARGET2 system could be used to create credit to finance euro imbalances, or that the ECB could buy government bonds in the secondary market does not preclude the fact that the actual crisis is, in the absence of these policies, the result of the inability to manage a CA deficit. In his example, the origin of the debit position of the Banco de España is an import of German cars, which presumably corresponds to a current account deficit position.

In this sense, the European crisis is caused by the failures of the euro design, but it is also one that forces countries with banks that over-borrow, or that have firms that over-import, to adjust by reducing its imports through austerity, and, hence, increasing its ability to repay. Note that leaving the euro (in particular for Greece, i.e. Grexit), which would imply some degree of depreciation of the newly created currency, might not be sufficient (or even necessary) to solve the crisis. I discussed this here before. Yanis Varoufakis, the Greek finance minister, has also been skeptical about depreciation and Greexit.

* Marc compares TARGET2 to Keynes bancor, and suggests that Keynes might be, more than Mundell, the father of the euro. Two things come to mind. I think in principle, the adjustment rules based on austerity, are closer to Mundell than Keynes (poor Keynes, this institutional mess should not be pinned on him). Second, Keynes' plan also implies that there is a need for surplus countries to finance deficit ones. What really matters in this is who creates the overdraft, who has the power to create money, so to speak. Normally that has nothing to do with having surpluses. National governments are not in surplus against its subunits. Globally the US is a deficit country, and is still the one issuing the global currency.