David Brooks wrong on austerity: it's not what they say, but what they do, that matters

So just heard David Brooks say at the PBS News Hour -- it says something about the state of media in this country that PBS (not surprised about the NYTimes) would have such a blatant ideologue as a commentator -- suggest that the election in the UK, which is doing better than other countries in Europe, proves that austerity works.

Obviously the UK economy sucks, and Labor promised austerity too, but the point is that Brooks suggested that the UK (and Germany) had austerity while others didn't. Not that he checks data ever. So I did. Below government final consumption in constant prices in Greece (blue) and the UK (red). 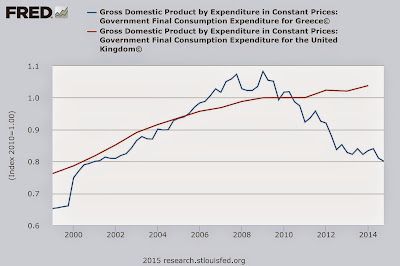 As you can see it's true that the UK has done better, simple because of less austerity, in fact, looking at just government consumption the UK doesn't seem to be pursuing austerity at all. So the fact that the governments in the UK and Germany are for austerity, while the current Greek one, at least nominally, it's not, does not mean that they do pursue austerity more aggressively than the rest of Europe. Unless Brooks thinks that what matters is what you say, not what you do.

PS: Below the same comparing the US and Greece. The US actually is more austere than the UK, but not nearly as much as Greece. 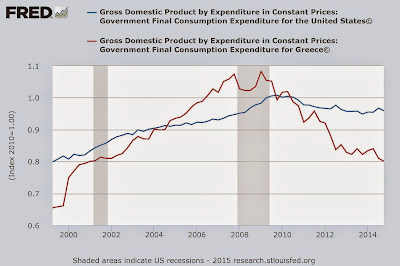