Here, as per the comments, an update picture of austerity in the UK in comparison to Greece and the US. I added Germany too this time. Data from the International Monetary Fund (IMF, WEO Database). Figures for 2014 and 2015 are estimates. 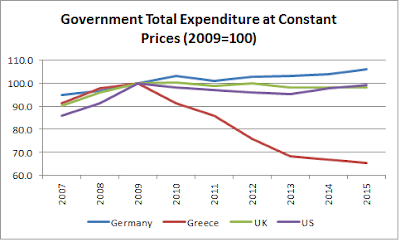 This graph shows total government expenditures rather than just consumption. Note that the UK has pursued austerity, but it has not been particularly more austere than the US. Germany has pursued moderate, very moderate, fiscal expansion. The decline in government spending in Greece has no parallel, as should be expected, since the country was forced to pursue austerity policies.

Again, this shows that David Brooks notion "that there were two countries that did what we call austerity," meaning Germany and the UK, and that is connected to the fact that "the two strongest political leaders right now in Europe are Angela Merkel and David Cameron," so that this is a vindication of austerity policies is, as I had noted before, preposterous.
By Matias Vernengo - May 11, 2015