Bernanke and Summers on global savings glut and secular stagnation

So Ben Bernanke is blogging now. He has basically defended his old idea that interest rates are low as a result of a global savings glut. Yes, it is basically the loanable funds theory of interest—with no consideration of the limitations associated with the capital debates—and the notion that the supply of funds, mostly associated to surplus countries like China, Japan, Germany and oil exporters, has pushed interest rates down.

This is essentially the same argument on negative interest rates that Krugman has made awhile ago, and not surprisingly Krugman has been favorable to Bernanke's post.* 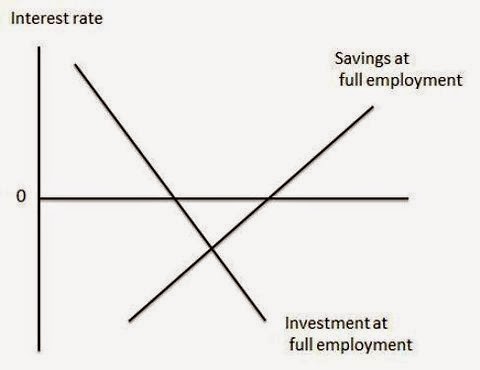 In Bernanke's view the solution for the savings glut is: "to try to reverse the various policies that generate the savings glut—for example, working to free up international capital flows and to reduce interventions in foreign exchange markets for the purpose of gaining trade advantage." This would, presumably, move the investment schedule and lead to a recovery.

I have criticized the global imbalances story before. As I noted then the actual problem is that the global imbalances are small. The empirical evidence for a external recovery on the basis of a more depreciated dollar is not convincing, but that is not the main problem with this argument. Both the secular stagnation as discussed by Summers, and the savings glut, as presented by Bernanke rest on the idea of an excess supply of savings, and a negative natural rate of interest. Summers says that the: "essence of secular stagnation is a chronic excess of saving over investment" and that "secular stagnation and excess foreign saving are best seen alternative ways of describing the same phenomenon."**

The main disagreement between Bernanke and Summers is on the solution. Summers is skeptical about exchange rate depreciation as a solution to the US stagnation. In his words:


"Successful policy approaches to a global tendency towards excess saving and stagnation will involve not only stimulating public and private investment but will also involve encouraging countries  with excess saving to reduce their saving or increase their investment.  Policies that seek to stimulate demand through exchange rate changes are a zero-sum game, as demand gained in one place will be lost in another."

And no the problem is not competitive depreciations, as Summers suggest. And not even a question of whether depreciation, the relative price substitution effect, would be enough to boost exports or reduce imports, which might be questionable (the last evidence I saw suggested that income elasticities tend to be larger than price elasticities, meaning that foreign trade responds more to changes in the level of activity), by the way. The problem is this notion that the solution is based on surplus countries spending more, as if the US does not have a privileged position and its external (and by the way domestic) deficits do not matter.

What Summers is saying is that depreciation does not work, but we need China and Saudi Arabia to boost the world economy. Seriously?! The US should be doing expansionary fiscal policy, and with that current account deficit would be even larger. The notion that there is a current account sustainability issue or that the dollar international reserve position might in danger is not particularly strong. But, at least on the policy issue, Summers is correct. Fiscal expansion is needed. Note, however, that there is no secular stagnation problem, associated to lack of investment opportunities. There is a political problem (remember Kalecki) that precludes more fiscal expansion.

* Krugman arguments were normally about the domestic economy, and the problem of the zero bound interest rate, or what he calls the liquidity trap.

** And there are too many problems with the excess savings story to discuss here. The investment schedule and the very existence of a natural rate of interest, negative or otherwise, is plagued by logical problems and by the complete lack of empirical evidence, since investment really reacts to changes in the level of activity (accelerator). Also, the notion that intertemporal decisions govern consumption behavior is not without its problems. That's why Keynes tried to abandon the loanable funds theory and developed effective demand, in which income adjusted for differences between investment and savings.
By Matias Vernengo - April 04, 2015