The Gold Standard and the Depression

I have been teaching on this topic this week. One of the accepted views on the Depression is that countries that depreciated earlier recovered faster from the crisis. The classic paper by Eichengreen and Sachs sort of established the result.* The notion is the traditional one. Depreciation leads to lower prices in foreign currency, increased competitiveness and higher exports. Graph below shows the correlation between depreciation (since the exchange rate is measured as the foreign price of domestic currency, lower rate means depreciation). 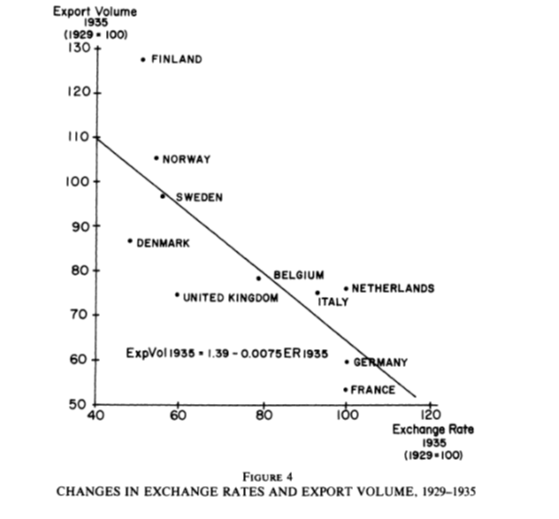 The indexes show the difference between the exchange rate and export volumes in 1929 (100) and 1935. So in 1935 France had not left the Gold Standard and the exchange rate remained at 100, while the exports were close to 50% of their 1929 level. There seems to be a clear negative relation between the exchange rate depreciation and export performance. However, note that in the United Kingdom a depreciation of about 40% implied exports at around 75% or so of the 1929 level. Only Norway and Finland seem to have higher exports in 1935 than in 1929. This was not an external demand led recovery.

This suggests that if depreciation had a role it was more likely related to the space that breaking with the Gold Standard rules provided for domestic authorities to pursue expansionary policies at home. Note that in this context, the depreciation, as much as higher tariffs and other trade related policies, are less relevant for their role in stimulating external demand, than by their role in protecting domestic production.

In the US the group of economists that were in favor of the depreciation of the dollar (see the letter by Harvard economists J. Raymond Walsh, Lauchlin Currie, John B. Crane, John M. Cassels, Robert Keen Lamb and Alan R. Sweezy in support of FDR's depreciation policy in 1934; and yes that includes Currie, later advisor to Eccles, and Paul's brother Alan, a Keynesian, not a Marxist), were also in favor of domestic fiscal expansion, which was at the end of the day Keynes point too. You can see Keynes arguing why the abandonment of the Gold Standard would be a good thing here, at the beginning of John Kenneth Galbraith's documentary.

This is still an important point, since there are significant lessons, at least it seems to me, for the European periphery story, in particular Greece. Depreciation alone cannot do the job. But a combination of import substituting policies, to reduce external constraint problems, with expansionary demand policies might work.

* There are also issues related to the role of the Gold Standard in causing the Depression, since the crisis was international, and many authors think that this suggests that it must have international causes. Hence, the Monetarist contraction story, or the Keynesian consumption collapse story (including the more radical version in which income distribution plays a role) would be incomplete. In this view, the relatively high rate of interest, related to the not credible inter-war Gold Standard, would be the cause of the depression. This view, as I noted before, seems closer to Keynes' Treatise on Money than his GT.
By Matias Vernengo - March 25, 2015