This is a bit old. Cochrane, the medieval dark lord of macroeconomics (Krugman suggests he has been an example of the Dark Age of Macroeconomics), has taken issue with the notion that deflation is a big problem. He suggests that: "Friedman long ago recognized slight deflation as the 'optimal' monetary policy, since people and businesses can hold lots of cash without worrying about it losing value." He explains that the reason for fears of deflation are associated to debt-deflation (the other two arguments are less relevant, namely: sticky wages and space for a higher inflation target).

He argues, however, that debt-deflation is not a problem. For him:

In his view, small amounts of deflation are not  enough to lead to a collapse of the economy. And he says the dreadful deflation spiral never happened, not even in Japan. So don't be afraid, deflation is actually kind of good. 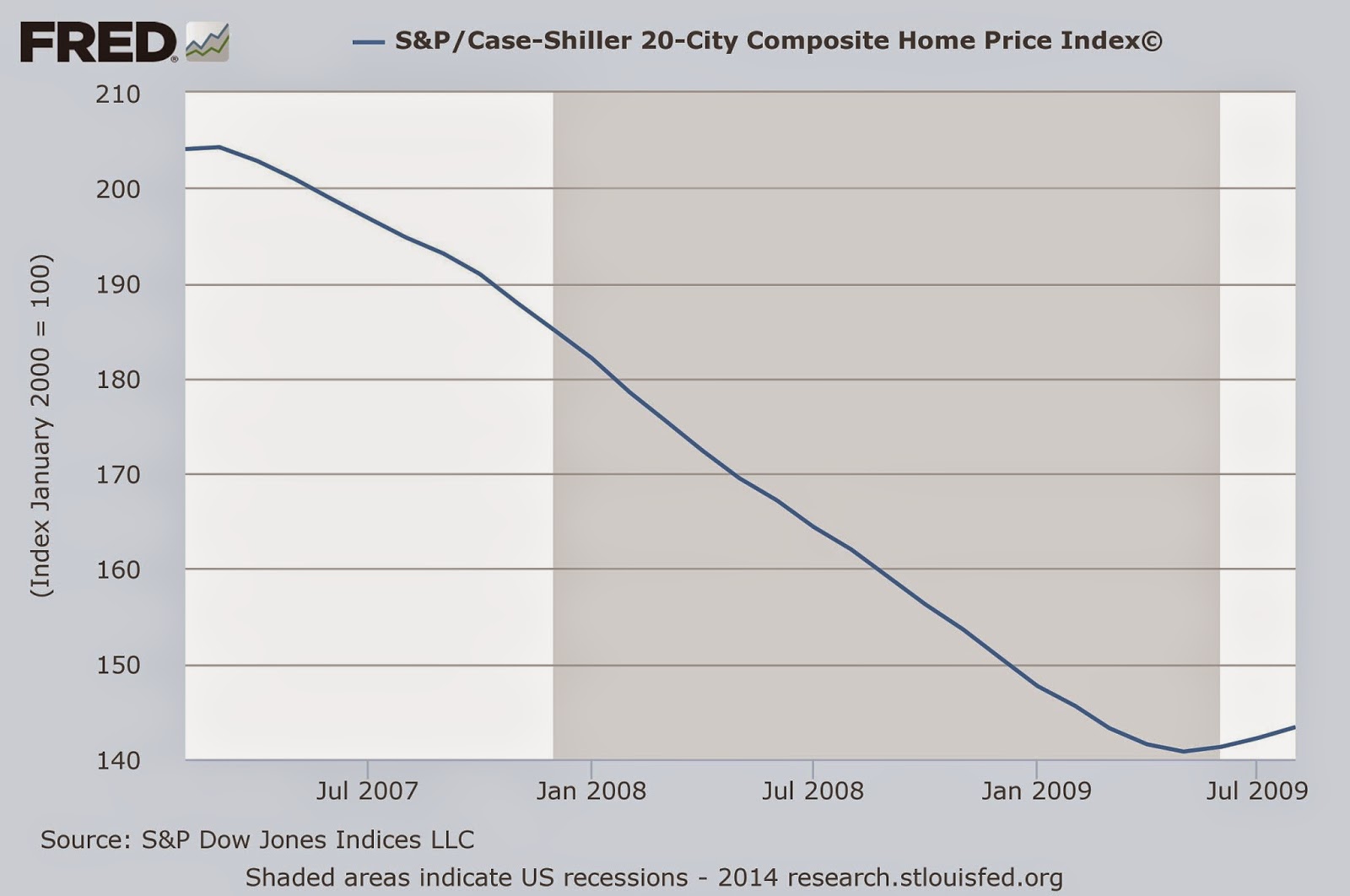 In other words, there was significant collapse of prices that bankrupted several homeowners. The problem  was not just the negative effects of price adjustments on spending though. Cochrane supposes that all adjustments are on prices, since the economy has a tendency to move back to its natural output (unemployment) level. Crises (debt crises) are not just caused by the increase in the real value of debt (debt-deflation), they are more often than not the result of the collapse of the ability to pay, for countries when the value of their exports collapse (negative terms of trade shock), for individuals when they lose their jobs.

The problem is that with less prospects of growing demand (consumption, that was affected by stagnant wages and asset price deflation), and more so after the collapse of Lehman and the severe contraction in credit, firms fired about 9 million workers, reinforcing the negative quantitative effects of lower demand. The multiplier (which Cochrane thinks doesn't exist) works in both directions. So even small amounts of deflation, in an economy with quantity adjustments, might cause significant problems (and quantity adjustments are not the result of any wage rigidity, even if those exist, since no firm would hire an additional worker, not even at a lower nominal wage, if demand is not growing).

Think of Greece for example, where deflation (CPI deflation) is the result of contractionary policies that also led to the skyrocketing of unemployment, now at more than 25%. 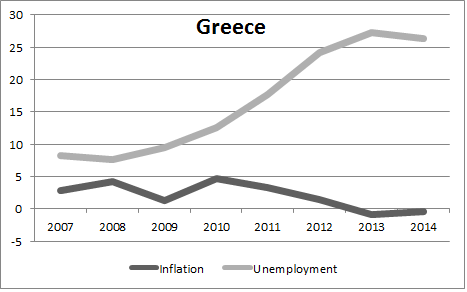 The deflation is not particularly large, less than 2% actually. But the policies that cause the Great Depression levels of unemployment, and weaken the labor force, and lead to lower nominal wages, are the same that explain the deflation. In Greece deflation per se is not the problem. The lack of expansionary demand (fiscal) policy is. The problem is the obsession with low inflation, which leads to an overly contractionary policy stance. And that's what most authors that complain about deflation actually mean. For Cochrane Greece is fine, one would imagine, after all deflation is less than 2%. I suppose the natural rate of unemployment is probably 25% for him.