What is 'Dollar Hegemony'? 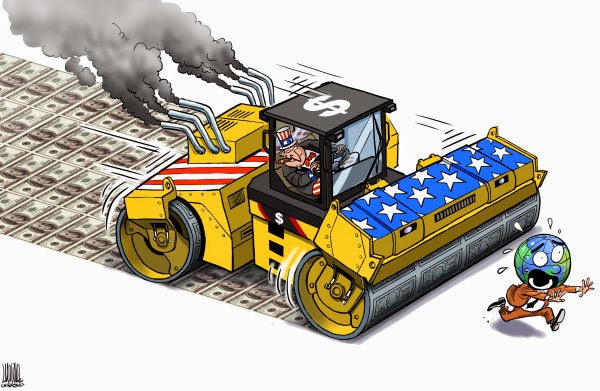 Today, the world economy operates under the artifice of US hegemony, fortified by the US dollar as an international reserve and vehicle currency. How did the United States arrive at achieving such pre-eminence?

From 1944 to 1973, the financial architecture of the world economy centered on a US engineered Keynesian accumulation agenda as a response to the devastation wrought by the Great Depression. The capitalist institutional structure, or social structure of accumulation (see Kotz et al., 1994), rested on finance being subservient to the promotion of industrial enterprise.

With socially-engineered capital–labour compromises in developed countries, neo-colonial governing institutions in the Third World, active State regulation in decisions with respect to capacity utilization, and a co-respective form of competition among large corporations set by regulations that brought together monetary authorities, large banks as well as large industrial capitalists, the post-World-War-II system was the era of “regulated capitalism”. Altogether, the world system was underpinned by the Bretton Woods arrangement, which called for globally fixed exchange rates against the US dollar tied to the price of gold and capital controls.

The international political-economic conditions were such that domestic macroeconomic autonomy, specifically with respect to monetary policy, for aggregate demand management could be feasible. Capital controls were seen as essential to reduce the volatility of capital flows and allow for low interest rates with the objective of pursuing full employment. As Keynes (1980, p. 276) argued, “we cannot hope to control rates of interest at home if movements of capital moneys out of the country are unrestricted.”

By the 1960s, however, US officials began to actively encouraging the growth of the Euromarket, that is, the pool of unregulated US dollar reserves concentrated in the City of London (Helleiner, 1994). With traditionally marginalized segments of the population in developed countries, particularly in the United States and in Western Europe, demanding social, political, and economic rights, and with national liberation movements in the Third World overthrowing US-supported oppressive governments, calls for an expanded role of the State in meeting citizens’ needs dramatically circumscribed global capital accumulation owing to heightened nominal wage–price spirals. Consequently, the global capitalist rate of profit fell (Duménil and Levy, 2004, p. 24). The Euromarket thus became the means for international financial markets to re-establish their influence, lost as a result of the Great Depression, and allow industrial enterprise to rebuild the conditions for future profitability via offshoring.

Speculative capital flows, however, began to undermine the capacity for the United States to guarantee the convertibility of US dollars into gold at fixed parity (Triffin, 1960). Even though the US dollar was the key international currency, it was fixed to gold. As such, debt was ultimately redeemable in an asset that was not directly controlled by the US monetary authority. Default was a possibility, even if a remote one, since through manipulation of the rate of interest, and through coercion and cooperation with other central banks in the world economy, the stability of the system could be maintained. With the globalization of finance via the Euromarket, nevertheless, speculation against the gold–dollar parity proliferated, making functional finance on a worldwide basis difficult to manage.

In 1971, Nixon closed the gold window and loosened capital controls. American officials concluded that it was no longer in their interests to maintain the linchpin relation between gold and the US dollar, and ipso facto withdrew support for the Bretton Woods system by which exchange rates were fixed and flows of capital were to a large degree controlled (see Helleiner, 1994; Vernengo, 2003; Ingham, 2008). The deregulation of financial markets established a global market of mobile financial capital, and the US dollar established itself as a global fiat-money standard. The world economy moved from a fixed dollar standard to a flexible dollar standard (Serrano, 2003).

For the first time in history, it is possible for the hegemonic country, in this case the United States, to be a global debtor, as national States are within their domestic economies, and to provide a default-risk-free asset to facilitate global capital accumulation. The risk that the United States would be unable to expand demand globally, because it is forced to maintain a fixed exchange rate between its currency and an external asset, is thus non-existent. It is true, however, that foreign countries and agents may show unwillingness to hold US-dollar-denominated assets, but, as in the domestic case, the US Federal Reserve (Fed) can always monetize public debt. This would be inflationary and lead to a run on the US dollar only if there is currency substitution on a massive scale, which would require a credible alternative to the US dollar (which does not exist yet). As such, the United States can therefore incur foreign debt without any reasonable limit.

Global imbalances, in particular the large US current account deficits that reflect their so-called “exorbitant privilege”, are instrumental for the functioning of the world economy, as evidenced by the dominance of the US dollar in international trade (Fields and Vernengo, 2013). An important part of this is associated to the fact that key commodities, like oil, are priced in US dollars in international markets. This not only implies that there cannot be an insufficient amount of dollars for the United States to import key commodities, but also that a depreciation of the US dollar does not reduce US imports necessarily (Parboni, 1981).

In fact, the Fed is the world economy’s central bank, which acts as the safety valve for mass amounts of international liquidity (Arrighi, 1999). The hegemonic position of the US dollar structures the world economy in such a fashion that the United States determines the international transmission mechanism for global economic activity. Hence, the role of the US dollar in international markets, and the advantages that come with it, are the spoils of structural power. The provision of this asset allows the United States to become the source of global demand, and to insulate itself from fluctuations and contradictions of perilous cumulative disequilibria that may arise in the world economy. The US dollar enables the United States to set the global social, political, and economic conditions, within which the transmission of misery (contagion) between countries, and between global and national levels, is essentially regulated.

Fields, D. and M. Vernengo (2013), “Hegemonic currencies during the crisis: the dollar versus the euro in a Cartalist perspective”, Review of International Political Economy, 20 (4), pp. 740–59.

Helleiner, E. (1994), States and the Reemergence of Global Finance: From Bretton Woods to the 1990s, Ithaca: Cornell University Press.