Where is the elasticity? (or more on devaluation and growth) 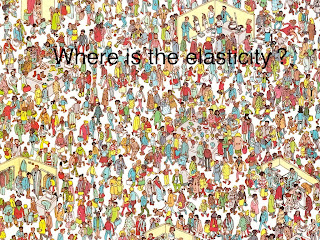 Since 2007 mainstream economists, and often some heterodox (or more precisely eclectic) authors, have suggested that the Argentine economy is on the verge of collapse (see for example my good friend Bresser-Pereira here or this). A typical argument made by both orthodox economists (some of which favored the Convertibility Plan of the 1990s) and the more unconventional is that real exchange rate (RER) appreciation is at the heart of the Argentine problems and the more recent lack of growth.

I have discussed this before here with respect to the so-called Sustainable and Stable Competitive Real Exchange Rate literature (see here). The argument for a SSCRER was put forward by Frenkel and Taylor in a well-known paper, but the notion has many defenders (see the good paper by Blecker and Razmi from Setterfield's essential book on growth), including more conventional authors like Rodrik. At the risk of being repetitive let me point out the pros and cons of the arguments for devaluation.

Depreciation protects local industry and leads to a boost to domestic production, and also, by leading to an increase in exports, reduces the external constraint of the economy. That would be the substitution effect associated to the change in the relative prices. Yet depreciation also (everything else constant) reduces wages, increases the profits of exporters, and leads (yes, the economy is wage-led) to a reduction in spending and lower levels of activity. In this case, a depreciation does help reduce your external constraint, but by leading to a contraction. The second effect, associated to an income effect, was well-known by heterodox authors, having been developed by Albert Hirschman and Carlos Diaz-Alejandro (for the Argentine case) and then formalized by Krugman and Taylor (see here; subscription required).

At the end of the day it is an empirical question. All the evidence seems to suggest, at least for the Argentine case (here paper by Fiorito and others in Spanish; but it seems to be more general, see here) that income effects tend to be larger than substitution effects, and hence one might be concerned about possible contractionary effects of a depreciation. 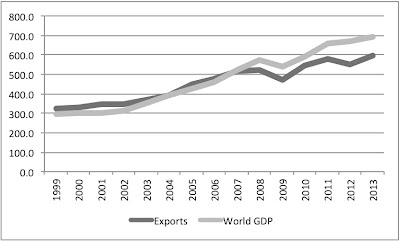 The relation between the real exchange rate and exports is less clear. As it is shown below after the large real depreciation in 2002, growth in the volume of exports goes hand in hand with significant appreciation. 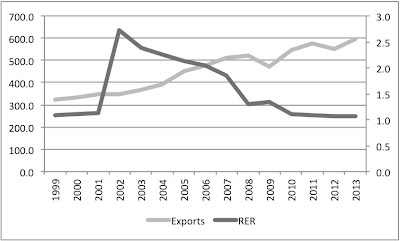 No doubt defenders of depreciation will argue that the big depreciation in 2002 was essential for export growth afterwards (see Rapetti here who argues that "competitive RER was a key factor behind Argentina’s recovery and growth"). But if you put the depreciation in the wider macroeconomic context of 2002, and compare with the current one, you are bound to have second thoughts.

The depreciated nominal exchange rate in a context of high unemployment (around 22%) did not lead to inflationary pressures, since wage demands were subdued (and hence the nominal depreciation translated into a large real one). Second, spare capacity meant that the protection afforded by the real depreciation led to a huge expansion of domestic production, spurred by the expansion of domestic demand (higher real wages and expansion of fiscal spending, particularly in social programs). Exports actually don't seem to move much with the depreciation. There is no econometric evidence for large elasticity of exports with respect to the exchange rate, in the short or long-run (if someone has it please, please, pretty please with a cherry on top share it; it's been frustrating to have an argument with people that argue a point for which there is no known evidence).

Note that all the above mentioned conditions are not in place now. Unemployment is considerably lower (around 7% or so), and the expansion of real wages and government spending have slowed down (so much so, that in the last year the economy has stalled). So maybe we need less Frenkel and Taylor and more Krugman and Taylor to understand what is going on in Argentina right now.