In the long run we are NOT all dead 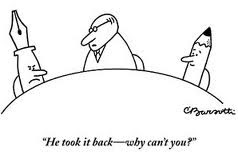 Niall Ferguson has apologized for his offensive suggestion that Keynes' phrase on being dead in the long run was somehow related to his sexuality or the fact that he was childless (more here and here). Good for him. Note, however, that in that famous phrase from the Tract on Monetary Reform, from 1923, Keynes was still very much a conventional Marshallian author who thought that full employment would reassert itself, and that the Quantity Theory of Money (QTM) worked pretty well. In fact, it is often said that the Tract was Milton Friedman's favorite among all of Keynes' books.


"But this long run is a misleading guide to current affairs. In the long run we are all dead. Economists set themselves too easy, too useless a task if in tempestuous seasons they can only tell us that when the storm is long past the ocean is flat again."

The point of the quote is that in the long run everything would be fine, since markets do get to full employment, and so, even without intervention, deflation and inflation do its magic, but the process is too long and painful, so it would be more reasonable to act in the short run. This was typical of the Cambridge version of Marginalism, which was very much in favor of government intervention to deal with market imperfections in the short run. This is true of Marshal and Pigou, as well as Robertson, and certainly Keynes, before the General Theory. Note that this does not mean, as most people think, that one should only be concerned with the short run. The point is that action in the short run facilitates the road towards the fully adjusted equilibrium in the long run.

This was still essentially Keynes' view by 1930, when he published the Treatise on Money, a book that is at heart Wicksellian [so at least he got rid of the QTM in this book], and that suggests that unemployment results from a monetary rate of interest that is too high with respect to the natural rate, in practice as a result from the Gold Standard rules, which Keynes wanted to abandon. [This precedes the modern views that the Gold Standard caused the Depression, by the way, as say defended by Barry Eichengreen]. This was a cyclical crisis that could be solved by reducing the monetary rate of interest, and in the short run employment programs, something Keynes defended in Can Lloyd George Do It?

The point of the General Theory (GT) is that there is no natural rate of interest, meaning that reducing the rate of interest would not bring investment to the full employment level of savings, and that the crisis was caused by lack of demand. The equilibrium between investment and savings was determined by variations in the level of output, and in the long run we are not self adjusted to full employment. Hence, the very logic of the phrase above is debunked by Keynes, when he became Keynesian, so to speak, and got rid of the old modes of thinking. Intervention is not needed because in the long run we are dead, but because the long run depends on the short run, and we tend to fluctuate around a sub-optimal position.

So in the long run we are NOT dead in the GT, in the absence of counter-cyclical policies we are all in deep trouble. Keynes was very much concerned about the possibility of capitalism to promote well being for all in the long run. In other words, not only is Ferguson wrong about the effects of Keynes' sexuality and lack of children on his economic reasoning, but he does not even get the point of the phrase.

PS: The best book to understand the theoretical changes in Keynes' views is still Edward Amadeo's  Keynes' Principle of Effective Demand, his PhD dissertation, supervised by Murray Milgate, and co-supervised by Lance Taylor, published with an intro by Vicky Chick.
By Matias Vernengo - May 05, 2013