Thelma and Boehner or going off the fiscal cliff 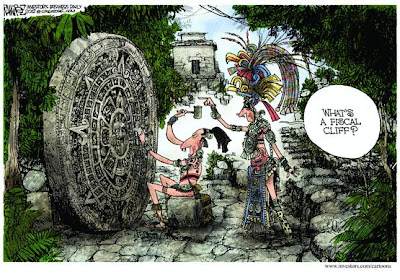 Brad DeLong thinks we're going off the fiscal cliff. Brace yourselves then. What to expect, according to him:

Unless I'm confused those look like the estimates of the Congretional Budget Office (CBO), run by
Douglas Elmendorf. According to the CBO:

So the fiscal cliff, which is more or less a decrease of US$ 600 billions in the projected deficit next year, mostly tax hikes with a modest reduction in spending of about US$ 60 billion (not considering feedback effects caused by increased spending as a result of higher unemployment), will lead to a mild recession.

So not the end of the world, but not good. But better than destroying social security for sure. And yes, by February we'll be talking about the debt ceiling again.

PS: Yep, I know, in the cartoon it is the Aztec Sun Stone not the Mayan calendar.

PS': On the broader problems with the fiscal cliff and why the consensus that we need fiscal adjustment of some sort is incorrect read Jeff Madrick's piece at the NYRB.
By Matias Vernengo - December 27, 2012