Sraffa and Marxism or the Labor Theory of Value, what is it good for? 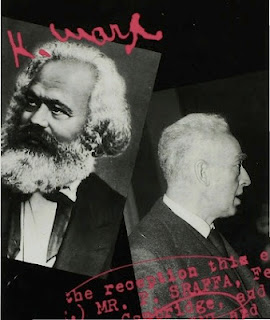 An old, but not completely closed, debate revolves around whether Sraffa was a Marxist or instead he should be seen as Ricardian, hence the term Neo-Ricardian used derisively by Bob Rowthorn (subscription required) and other Marxists authors (and also by Frank Hahn, again subscription required). From a personal point of view there is little doubt that Sraffa identified with Marxism, and close friends like Antonio Gramsci and Maurice Dobb would agree. But the important question is whether his contributions in Production of Commodities by Means of Commodities (PCMC) should be seen as a development or a criticism of Marx's theoretical tradition.

For the most part the question revolves around the relation between Sraffa's prices and the labor theory of value. Several authors tend to believe that the latter theory is central for Marx's theory of exploitation. Recent interpretations such as the so-called New Interpretation (NI) and the Temporal Single System (TSS) would agree on that point.

For example, Foley and Duménil (2008; subscription required) argue that:

The LTV is central to Marx's theory of exploitation, a term he uses to describe a situation in which one individual or group lives on the product of the labour of others."

On the similar claims by the TSS Marxism see Mongiovi (2002; subscription required). [Vienneau provides a list of readings on the TSS topic here.]

Smith (1776, book I, chapter 6) makes the value of commodities depend on the quantity of labor required to produce them is where there has been no accumulation of capital or land. In his words:


"In that early and rude state of society which precedes both the accumulation of stock and the appropriation of land, the proportion between the quantities of labour necessary for acquiring different objects seems to be the only circumstance which can afford any rule for exchanging them for one another."

But when profit and rent make their appearance alongside the worker's income, the rule is no longer applicable. The price of a commodity is then obtained by 'adding up' its component parts, namely: wage, profit and rent. The adding up theory implied that profits and wages had an independent determination. Hence, if profits went up, and prices too, real wages might not decrease. As a result, one cannot determine profits independently of prices.

Ricardo saw the limitations of the adding up theory. In his early writings he solved the problem by presuming that the economy produced corn (grain) with corn and labor, and the surplus was a physical amount of corn, so the rate of profit could be measured as ratio of corn (the surplus) to corn (the means of production advanced for production). He, then used, the labor theory of value as an approximation to the solution in his Principles, knowing that prices were not exactly proportional to the amounts of labor directly and indirectly used in production.

That was, also, essentially the role of the LTV in Marx's volume I of his masterpiece Capital. That is, the LTV allows Marx to determine the rate of profit independently of prices. Note that Marx was also aware that relative prices determined by the amounts of labor directly and indirectly incorporated are incorrect once you have produced means of production. However, Marx thought that embodied labor redistributed by the process of competition meant that in the aggregate total surplus value  corresponded to total profits, even if prices of production deviated from embodied labor. As a result, on the basis of the LTV it was still possible to obtain the correct rate of profit. As it turns out, there is no reason for positive and negative deviations of prices of production from the labor values to cancel out. You cannot argue with the algebra.


Marx had no way of knowing this. Only with Bortkiewicz, Dimitriev and Tugan-Baranovsky's work, early in the 20th century, this was clearly understood. If in general commodities do not exchange at labor values, then there is no reason why that should be correct for two composite commodities that make the total physical surplus and the physical advanced means of production.

Sraffa's solution, based on the standard commodity (to be discussed in another post), shares with Ricardo's corn model the idea that one can measure the rate of profit as a share of a particular commodity (Sraffa's being a composite commodity, that is, composed of several goods). It also shares with Ricardo the fact that only basics (commodities that enter the production of all goods including their own production), which for simplicity can be related to subsistence goods, affect the rate of profit, while non-basics, or luxury goods, are not relevant. Further, as noted by Sraffa too, his solution resembles Smith's since the standard commodity can be seen as akin to the former's idea of labor commanded, that is relative prices are proportional to the amount of labor that they can command (buy). In that sense, Sraffa's prices are firmly based on a certain notion of the labor theory of value.

Mind you, in the central issues Marx's theory was correct. Once you determined exogenously the real wage, and the technical coefficients of production are given, one can determine the rate of profit, and it is inversely related, everything else constant, with the real wage. Hence, the theory of distribution based on class conflict which is the central element of the surplus approach, including Marx, is logically consistent [which is more that can be said about marginalism, as showed by the capital debates].

But does the Sraffian system mean that exploitation as interpreted by Marx is not valid anymore, since, as noted above, some Marxist authors think that the LTV (narrowly interpreted as prices of production proportional to embodied labor) is essential for that part of the Marxian project? Petri (2012)* has published an excellent review of the limitations of the NI and TSS. He clearly states (p. 3) that:

"The proof that labour is exploited, in particular, does not lie in the validity of a quantitative correspondence of surplus exchange value with surplus labour time; this is a misconception that derives from a mistaken acceptance of the argument that the inability to prove such a correspondence might mean that the capitalists contribute to production, that profits reflect their contribution, and that this is the reason why commodities do not exchange in proportion to labours embodied – the argument of the ‘vulgar’ economists and then of the marginalist critics of Marx" (emphasis added).

Why is that the case that there is no correspondence between the LTV and whether labor is exploited or not? Note that for Marxists this is a necessary condition because workers work more time than what is needed for their reproduction, and that is the supposed basis for exploitation. It is worth quoting Petri at length here:


"Imagine an isolated market economy where production is carried out by self-employed artisans and cooperatives, and the rate of profit is zero: prices of production are proportional to labours embodied. One day Gengis Khan’s army invades this community, but instead of killing everybody Gengis Khan announces that he will be content with collecting a yearly monetary tax at a rate r=20% on the value of the capital employed in each productive activity, a tax he will then use to buy goods on the market. The community is obliged to accept, and prices of production come to include a 20% tax on the value of capital which has the same effect on relative prices, and on real wages, as a 20% rate of profit. Relative prices are no longer proportional to labours embodied, Marx’s r=S/(C+V) does not work, but production is still performed by the same labourers, and the goods appropriated each year by Gengis Khan with the income deriving from the tax do not reflect any productive contribution of the oppressors. One would have little hesitation, it would seem, to say that Gengis Khan is exploiting this community. But if Gengis Khan had imposed the tax as a given percentage of wages, with the rate of profit remaining zero, then relative prices would have remained proportional to labours embodied, but exploitation would be still there. On the other hand, imagine that the 20% tax rate on the value of capital is imposed not by Gengis Khan but by unanimous popular vote because it is decided to use it to help for some years another community struck by an earthquake: in this case the surplus product would again be associated with an impossibility to explain prices with the labour theory of value, but few would call the surplus product the fruit of labour exploitation. All this shows that the proportionality or non-proportionality between exchange values and labours embodied reflects, not the absence or presence of other productive contributions besides that of labour, but only the specific way the mode of appropriation of the surplus product affects relative prices; the origin of the surplus remains to be ascertained" (emphasis added).

Hence, as the simple example shows one might have exploitation without the LTV, and no exploitation with the LTV, which should be a black swan for those that think that Marxism stands or falls with the narrow definition of the LTV. For our purposes what matters is that the correct solution of the problem of the determination of the rate of profit independently of prices, provided by Sraffa, actually strengthens and is a development of the theories of Marx and the other authors of the surplus approach. Sraffa is the author that makes Marx's conclusions possible.**

* Petri provides a critique of NI and TSS solutions of the transformation problem too. A different solution, that is more Ricardian in assuming that embodied labor provides a good empirical approximation to production prices, is provided by Shaikh (1977).
** Interestingly Petri quotes several passages in which Foley tends to suggest that Marxism and marginalism are not necessarily incompatible.