A comment on a previous post suggested that Okun's Law is not valid anymore. Not the first time this claim is made, by the way (see also previous discussion here). So let me be clear, there is as much reason to believe that Okun's Law is gone as you might have about the demise of the Law of Gravity.

The graph below shows an admitedly very crude econometric rendition of the Law using annual data from 1948 to 2011 (data available here). It says that if you grow approximately 1,91%, then the unemployment rate falls 1%, which is close to the 2 to 1 ratio to be expected. 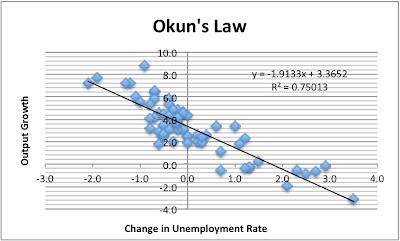 Further, and more importantly, note that what Okun's Law says is that ﻿productivity is pro-cyclical. That is, unemployment changes less than output, so in a boom you hire less workers, since they are more productive and can increase output more than proportionally, while in the recession you fire less workers than you would need to produce given the fall in output, meaning that their productivity falls (usually explained as a result of the costs of training the labor force, so firms keep workers idle, because in a boom it would be worse if they had to retrain the labor force). Graph below shows the evolution of output growth and productivity growth for the same period. 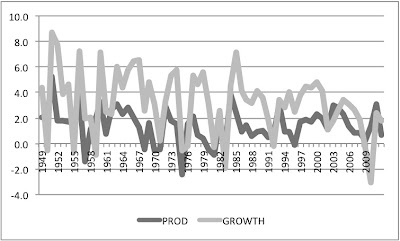 Clearly labor productivity was and still is pro-cyclical. Sure enough in very short periods you might have that the relation between output an hiring changes, and it gives the impression that the Law is broken. Also, it might happen that the magnitude of the relation is variable, and you have less hiring with an increase in output (like in a jobless recovery, which would be the last three recoveries including the current).* But the Law still works, that is, more output does lead to more hiring of workers at a less than proportional rate, and labor productivity is pro-cyclical.

Note that, in part, the political reason for suggesting that Okun’s Law is broken is to argue that expansionary policies cannot solve the unemployment problem. That argument is bogus. So don’t worry, Okun is doing fine. Be happy!

* I personally believe that the changes, and the so-called jobless recoveries, are not directly related to the Okun component of the relation between growth and productivity, but to the long run or trend component (the so-called Kaldor-Verdoorn's Law). I have written on the subject here (or here).