Credit Suisse publishes a Global Wealth Report, and if you think that income inequality is bad, well you don't know anything about wealth (h/t Jorge Gaggero for the link). According to the report total wealth in 2011 was US$ 210 trillions. Figure below shows the distribution by deciles around the world. 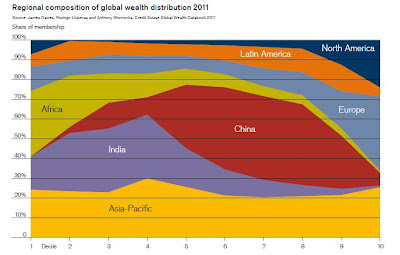 The poor are fundamentally in Africa, India, and Asia-Pacific (mainly Bangladesh, Indonesia, Pakistan, and Vietnam), while the wealthy are in the US, Europe and Asia-Pacific (i.e. Japan). China has more people in the middle section of the wealth distribution than at the extremes. No big surprises there.

The distribution of global wealth is shown below in what the authors of the Report refer to as the Wealth Pyramid. 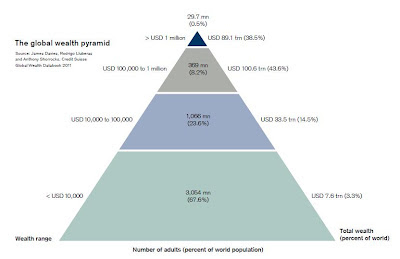 So 67% of the world's population (around 3 billion people) hold about 3.3% of total wealth at the basis of the pyramid. At the top of the pyramid, 0.5% of the population holds approximately 38% of the wealth. These are the dollars millionaires, which are overwhelmingly in the US, Europe and Japan.

Interestingly, in a different study, the Tax Justice Network has estimated that unreported offshore wealth held in tax havens has reached between US$ 21 and 32 trillions. That is, between 11 to 16% of all global wealth in 2010 (which was at US$ 195 trillions) is out of reach of taxing authorities. If you consider that this money comes fundamentally from the ones at the top of the pyramid, that hold wealth in more liquid forms, it is between 23 and 36% of the wealth of the top 0.5% of the wealthiest 1%. The global elites like Mitt Romney if you will.
By Matias Vernengo - July 23, 2012