A farewell to growth? 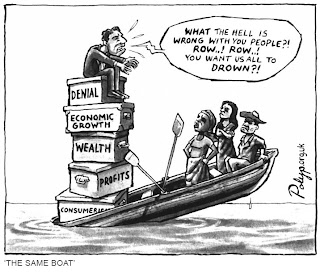 ﻿
It has been common for certain progressive groups to suggest that better income distribution and no growth, or even degrowth more recently, would be better than the capitalist driven consumerist growth process [for a critical review of this literature go here]. Several different strands of thought are involved in this view, and it would probably be worthwhile to disentangle them all.

First, there is an obvious Malthusian flavor to this view, going back to the dire predictions by the Club of Rome in the early 1970s, as a result of limited availability of non-renewable resources. Peak oil has been predicted a few times since. And yes it may very well happen in the near future, but somehow I doubt it. Remember that we moved away from coal and steam engines to oil and combustion ones, not because coal disappeared or became truly scarce, but simple because technological change made it less important as a source of energy (and yes we still burn a lot of coal).

In that sense, our problem is less that we have reached the limits of the existence of renewable resources, but more that the consequences, which are associated to Green House Gas (GHG) emissions, will be and already are dire. It is very likely that climate change caused by GHG emissions will lead to increasing costs in terms of food shortages, for example. But the question there is less that we cannot grow [the Malthusian thing, food does not grow as fast as population; the quintessential anti-Malthusian was Ester Boserup, an early feminist economist, that showed that agricultural productivity was determined by population dynamics; in other words, higher population growth led to increasing agricultural productivity], but who bears the costs of growth.

We leave in a world in which many developing countries import food, in part as a result of very high productivity in agriculture in developed countries, and in part as a result of subsidies and trade policies imposed by developed countries. The costs of global warming will fall overwhelmingly over poor and food-insecure countries in dry and tropical regions, that largely depend on rain fed farming, mostly in Sub-Saharan Africa and South Asia.

That means that a more equitable system to redistribute the costs of climate change, and alternative trade and agricultural policies are needed, which provide food security around the globe. Further, to reduce the effects of climate change a huge increase in spending on R&D is necessary.A Green New Deal or environmental equivalent of the space race, and lots of regulation would do a great deal to promote new and cleaner technologies (see for example the 2006 documentary, “Who Killed the Electric Car,” on what a regulation did for the electric car).

Finally, note that there is no evidence of sustained technological progress (call it division of labor, or productivity, and you see that the wealth of nations might depend on it) with zero growth or negative growth. Productivity is not only pro-cyclical, but also structurally connected to growth. No growth in demand means limited incentives to productivity increases. So only with economic growth there is a hope of getting cleaner technologies. Degrowth also might lead to all sorts of environmental degradation, since it is far from clear that a society with spiraling down output would manage resources efficiently.

I have my own views on what is more or less likely under the particular circumstances we are in. It seems reasonable, that if the redistribution towards the less privileged that the no-growth/degrowth crowd want took place that a consumption boom would follow. Particularly in developed countries were wages have been repressed for a while and which the last few years of the recession have made worse. And that would lead to growth, which is the opposite of what they want. But as much as I would favor that sort of redistributive policy, alas it is not in the cards.

Further, although it is true that consumerism is in many respects created by corporations and several elements in the consumption patterns in modern advanced societies are wasteful, one might also be careful about the false moralism of the New Puritans, as James Livingstone refers to those that preach that all thrift is good and all consumption bad. Consumption is associated to growth, and to better living conditions for the poorest among us. After all it has been the consumer society created by the Industrial Revolution that allowed us to obtain several of the benefits that we now take for granted in civilized societies, with longer life expectancy and better quality of life.

Finally, there is a naïve neoclassicism that is also part of the problem with the no-growth/degrowth crowd. It seems that for some, economics is synonymous with a certain view in which supply and demand determine everything, and, hence, the rejection of the consequences of those neoliberal policies must pass through the rejection of growth too.

Of course growth might not be associated to the market forces as suggested in neoclassical theory (and markets might actually work in very different ways than the mainstream thinks they do). Growth might often be the result of limiting the power of markets, and driving economic forces towards alternative goals. And, while it is certainly true that not all growth is good for the environment, an alternative (and Keynesian) perspective of what is behind growth and development processes might open the door for more environmentally friendly economic dynamics. A simple example would be to use the proceeds of say nationalized and heavily regulated oil extraction for investment in research and development of new technologies.

PS: Obviously all of the views discussed above are not held necessarily by any particularly person that believes that no-growth or degrowth is necessary. And I left a few additional views out, e.g. a view that capitalism is doomed and we are on the verge of a new (perhaps better) system (by the way, I don't agree with that one too; capitalism is doing fine, even if workers are not). But all of these propositions are part of the arguments used by different people to suggest that the benefits of economic growth are overrated.
By Matias Vernengo - February 23, 2012