Krugman is wrong about China

If you believe Krugman's last column, you would think that China is like the US (or Japan he says; I would add Spain or Ireland), i.e. growing as a result of a housing bubble. His analogy seems to follow from the 'weakness' of consumption, that is, the fact that consumption is only 35% of GDP. He says:


The obvious question is, with consumer demand relatively weak, what motivated all that investment? And the answer, to an important extent, is that it depended on an ever-inflating real estate bubble.

He forgot to check real wages. The graph below shows that, in contrast to the US, Chinese wages have expanded incredibly fast. Since the Asian crisis, real wages have grown at more than 10% per year. 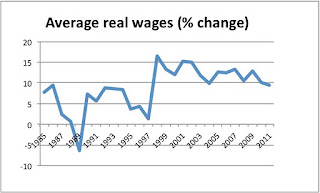 Consumption as a share of GDP remains low simply because a lot of investment is State driven and exogenous, and incredibly large. Even if there is a real state estate bubble, growth is led by government spending and by rising real wages. And by the way, there is no significant foreign debt, so a collapse of a bubble could be handled by domestic authorities without a sweat. Krugman is just wrong on this one.